Make a Killing From Corporate “Zombies”

To combat the coronavirus and shore up financial markets, the Federal Reserve has vowed to indefinitely print money to buy corporate debt, much of it toxic.

In the process, the Fed is creating a slew of “undead companies” that can keep borrowing money even though they can’t pay their debts. In the final reel of this economic horror show, I expect to see financial carnage.

I continue to be aghast at the disconnect between the pandemic-induced recession and the bullishness of Wall Street. We’re grappling with severe levels of unemployment and record small business bankruptcies, and yet stocks trade at excessive valuations. We face a day of reckoning.

However, as I explain below, there’s a way for average investors to profit from these imbalances. First, let’s examine the backdrop.

The Fed throws open the spigots…

If Federal Reserve monetary policy stays the course, the U.S. central bank will soon have a whopping $9 trillion on its balance sheet by next year (see chart). 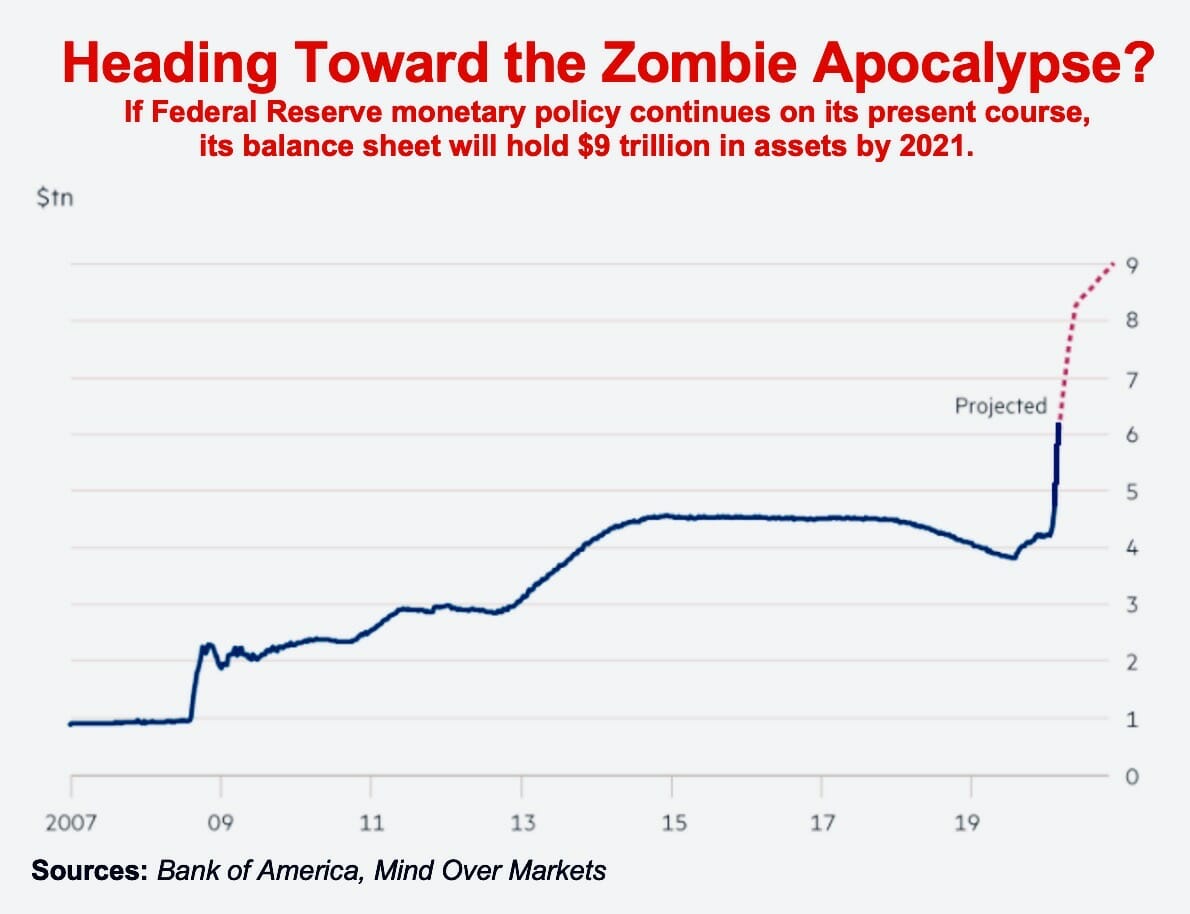 In the meantime, the U.S. recovery is sputtering. Federal Reserve Chair Jerome Powell used uncharacteristically blunt language Tuesday in front of the National Association for Business Economics, in support of a second fiscal stimulus package: “Too little support would lead to a weak recovery, creating unnecessary hardship for households and businesses.” He warned that failure to reach a deal could result in “tragic” economic consequences.

I’m not surprised by the collapse of fiscal stimulus talks. For several weeks, I’ve consistently warned readers that a second relief bill is highly unlikely.

I’ve never witnessed such toxicity in Washington, DC and I don’t expect to see any meaningful legislation accomplished before the November election.

That leaves monetary stimulus as the main pillar for equities. Under Powell, the Fed has poured an unprecedented amount of liquidity into the markets, which in turn has fueled the pandemic-era rebound in stocks.

The stock market rally since the bear market lows of late March has generated massive piles of cash for corporate giants, especially among Big Tech companies. U.S. non-financial corporations are sitting on about $4 trillion in cash, according to the latest Federal Reserve Bank Flow of Funds estimate, up from $2.7 trillion a decade ago and only $1.6 trillion in 2000.

An increasing number of companies are plowing their cash windfalls into mergers and acquisitions (M&As). Many of these deals are all-cash transactions.

According to research firm GlobalData, there were 253 M&A deals with a transaction value of $50 million or more in the first half of 2020. M&A premiums averaged 20% to 30% above a target’s pre-acquisition share price.

Acquisition targets tend to be smaller companies trading at bargain valuations, allowing the acquiring companies to quickly gain new technologies and customers. Why fight for market share when a competitor can be picked up on the cheap?

In recent weeks, M&A activity has gained momentum following the an­nouncement of several high-profile deals. However, if the busi­nesses can’t be integrated properly, projected profits that are cited to justify the deals are unlikely to materialize.

I’m seeing a lot of M&A deals among inherently weak companies that are trying to create profitable synergies where none are possible. Thanks to the Fed’s massive largess, these brain dead companies are getting bailed out even though their businesses aren’t sustainable. Heavily indebted companies have backed themselves into a corner.

Reap profits from the walking dead…

Therein lay opportunities for individual investors like you. I turn your attention to my colleague Jim Pearce, who has figured out a way to make money from all of this corporate folly.

Jim Pearce is the chief investment strategist of our flagship publication, Personal Finance. A veteran trader with decades of profitable trades under his belt, Jim is ready to reveal his personal secrets for turning zombie companies into your most profitable trades ever.

Jim first developed his trading tactics while managing a $50 million portfolio of wealthy investors, across the last two “zombie markets” in early 2000 and late 2008.

Want to learn the details of Jim’s next explosive trades? Click here to sign up for his online tutorial. Armed with Jim’s techniques, you can make a killing while other investors get bloodied.