These 3 Risks Could Tank the Stock Market

Sometimes, the short-term direction of the stock market seems to make no sense at all. In a moment, I’ll show you how you can make big bucks waiting out Wall Street’s short-sighted behavior.

But first, let’s take a look at a case in point from last week. On Tuesday, the S&P 500 Index fell 1.4% when President Trump tweeted that he was deferring action on a new economic stimulus deal until after the November 3 general election.

The following morning, the index jumped by the same amount after Trump changed his mind and said that he is ready “to sign right now” a bill for another round of $1,200 stimulus checks to “go out to our great people IMMEDIATELY.”

The total stock market value of all the companies that comprise the S&P 500 Index is roughly $23 trillion. Given the same-sized reaction to both announcements, a reasonable inference would be that this bill, if passed, would be worth approximately $320 billion in stock market valuation.

Whether or not it happens at all is not the point. What is important is that the stock market appears to have overreacted to both announcements.

First, the amount of money involved is only half as much as the loss and gain of the index on those two days. Second, even if the bill is approved, not all of that money will end up going back into the economy right away.

Short Interest on the Rise

The stock market is desperate for good news these days. That’s why it overreacts to anything that can be construed as being potentially beneficial to the economy.

Read This Story: Economic Recovery: In the Eye of the Beholder

Take a look at the airline industry. It has been crushed by the coronavirus pandemic. In September, the TSA passenger checkpoint count was down 67% from last year.

As a result, all of the major airlines are cutting costs by laying off thousands of workers and canceling hundreds of new plane orders. That’s why Trump has earmarked $25 billion in payroll support to just the airline industry. 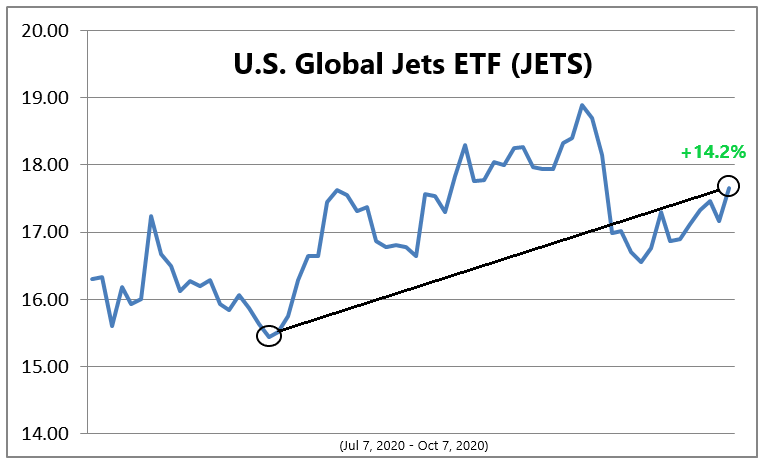 There is no good reason I can think of for this fund to be gaining altitude now. The summer travel season is over. Airline passenger traffic (and revenue) is likely to drop in the months to come. The daily case count for COVID-19 is back on the rise.

At the same time JETS is rising, so is short interest in many of its holdings. Short interest is the number of shares that have been sold but were not owned by the sellers. Their goal is to buy those shares back at a lower price in the future for a profit.

The average short interest ratio for the S&P 500 is less than 3%. However, short interest in AAL is above 40%. Apparently, a lot of speculators believe that American Airlines will soon declare bankruptcy.

The problem with selling a stock short is that it entails unlimited risk. The shares sold short must one day be bought back to close out the trade. And since there is no limit to high a stock can go, the losses can be substantial if a trade goes against you.

That is why I prefer buying put options on stocks that I believe are about to nosedive. That way, my risk is limited to only what I paid for the option.

That means I could lose 100% of my investment. However, the potential profit can be many times that amount. That’s why I like to have several trades open at any one time. I’ll gladly accept the occasional clunker in exchange for the big gains from my winners.

To help identify future winners, I use a screening tool that evaluates every single stock that trades on an American exchange. And right now, I see dozens of stocks that appear grossly overvalued.

I believe conditions are ideal for buying put options. Over the next couple of weeks, hundreds of companies will release their third-quarter results. If those figures come in beneath expectations, shareholders may stampede for the exits.

In less than a month, we will know the outcome of the general election on November 3. Or rather, we might know the outcome in a month. The potential chaos surrounding that event could also send stocks into a tailspin.

A second wave of COVID-19 could once again shut down large segments of the economy this winter. If that happens, we could see a repeat of the steep stock market correction from earlier this year.

The combined effect of all three of those events happening at the same time could be disastrous for the stock market. That’s why I am holding a free tutorial in a few days to teach you how to profit from overvalued stocks. If you’d like to join us, CLICK HERE.