Red, Blue and The Long Green

When President Franklin Delano Roosevelt was asked at a press conference whether he was a capitalist, a communist, or a socialist, he simply responded: “I am a Christian and a Democrat, that’s all.”

As the November 3 election gets closer, don’t get hung up on political labels and “isms.” Money is neither red nor blue. It is green. Whether you’re a Republican or Democrat, always remember that a U.S. president’s affect on investment or economic development is typically indirect. The market is an economic barometer, not a political one, and stocks move according to fundamentals.

Successful investing depends upon keeping our personal political views separate from our investment decisions, while staying informed about the policy agendas of our elected officials.

Regardless of their party affiliation, political leaders in America are in the business of helping business. Their tactics may diverge, but their goal is the same: grow the economy and make citizens more prosperous. Which brings me to the drama this week over new fiscal stimulus.

After surprising the political world by abruptly canceling stimulus talks, President Trump reversed direction Wednesday and suggested that pandemic economic relief could get passed in incremental pieces. In particular, he urged a bailout for the beleaguered airline industry. Wall Street heaved a sigh of relief and stocks rallied across the board. Airline stocks surged.

However, don’t predicate your investment decisions on ephemeral politics. Stick to your retirement plan. Since the end of World War II, the U.S. economy’s long-term trend has been positive, under a variety of presidential administrations and political backdrops. It took a “black swan” in the form of a deadly global pandemic to make a dent in this trend (see the following chart). 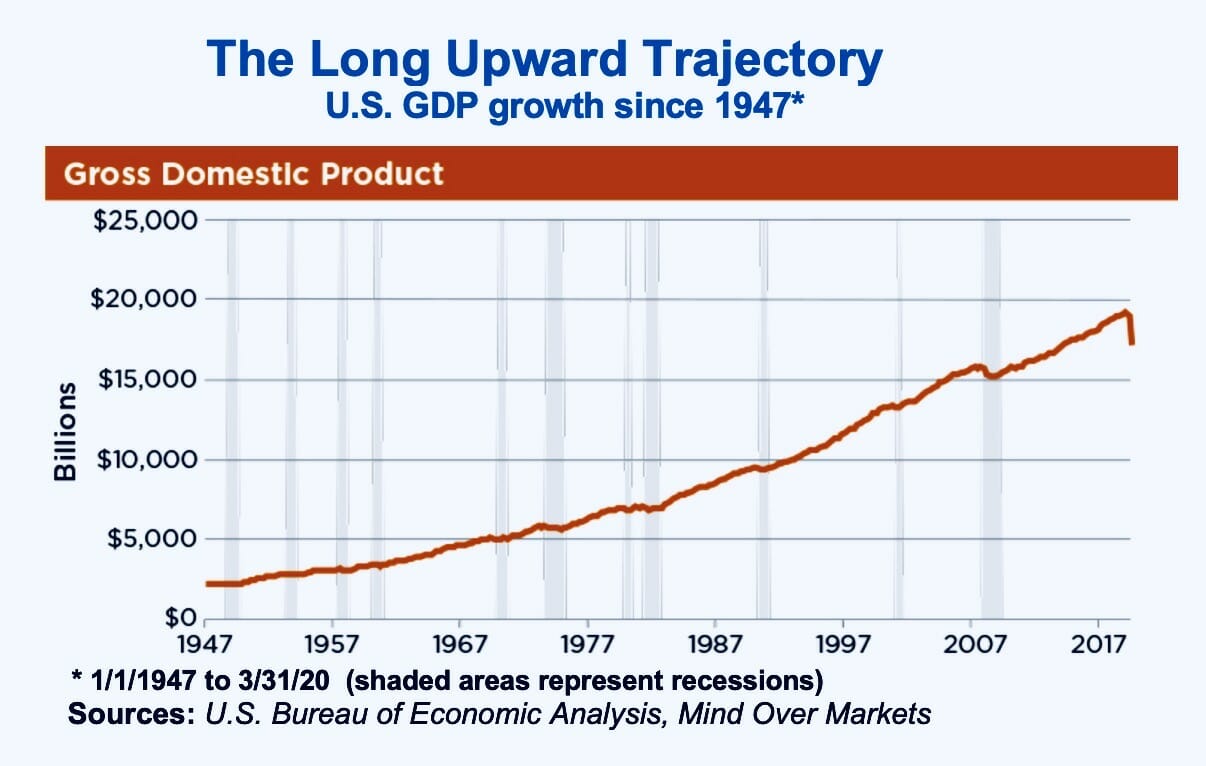 Politicians come and go, making various campaign promises that often go unfulfilled. Sometimes power is unified under one party in Washington; sometimes it’s divided. But economic laws always prevail, whoever is in charge.

We can thank the wisdom of the Founding Fathers and their system of checks and balances. That system is being tested this year, amid a severe recession, deadly plague and political strife. But as Warren Buffett once said: “Nothing can stop America when you get right down to it. Never bet against America.”

Since 1929, the total return of the S&P 500 has averaged 57.4% under the full presidential term of a Democratic president, versus just 16.6% under a Republican. But don’t jump to facile conclusions about this data. Other factors come into play during a given presidential cycle, such as the composition of Congress and whether the country faces crises such as war. As investment advisors like to say, past performance is no guarantee of future results.

Of course, we’ll experience bumps along the way. Indeed, I’m expecting a correction of at least 10% before the end of 2020. The forward price-to-earnings ratio (FPER) of the S&P 500 currently hovers at 22, compared to the 10-year average of 15. In the context of negative corporate earnings growth and a recession, the valuation math doesn’t add up. But you should welcome corrections; they restore balance and put pricey stocks on the bargain shelf.

The upshot: You should develop an investment strategy that’s designed to last beyond a single election season. Remember all of those promises since 2016 that the federal government would massively boost infrastructure spending, revamp our health care system, and resurrect old-line industries such as coal? None of it happened. Betting on government policy is like gambling in Vegas.

In a bygone pre-Internet era, when I worked as a reporter on a daily newspaper, we had a saying in the newsroom: “Today’s news is tomorrow’s fish wrap.”

No one understands these concepts better than my colleague Jim Pearce, chief investment strategist of our flagship publication, Personal Finance. Jim has devised a way to make money from the mayhem all around us.

We’re witnessing the rise of indebted companies that are being kept alive by the Federal Reserve’s aggressive monetary policies. These vulnerable companies are ripe for a tumble.

A veteran trader with decades of profitable trades under his belt, Jim is ready to reveal his personal secrets for turning these “zombie companies” into your most profitable trades ever. To learn the details, sign up for Jim’s online presentation by clicking here.