Economic Recovery: In the Eye of the Beholder

Economic reports tend to be political Rorschach Tests. Whether you find optimism or pessimism in the data often depends on party affiliation. That’s always been true, but in recent years the polarization has gotten worse.

Subjective tribalism holds sway these days, even in the financial world where hard facts are supposed to rule decisions. Regardless of which party is in power, you should always remain wary of political spin. It can cloud your investment judgment.

Below, I look at the latest data with an apolitical eye. I also steer you toward an investment technique that allows you to put the election season’s disarray to profitable use.

The U.S. Labor Department reported Thursday that new applications for jobless benefits were almost flat last week, as the economic recovery continues to lose momentum. There were 840,000 new claims filed in the week ended October 3, a drop of 9,000 from the previous week’s level, which was revised up to 849,000, according to the seasonally adjusted data.

However, the level of new weekly claims still hasn’t dropped below the worst single week of the 2008-2010 global financial crisis. In the week ended September 19, more than 25.2 million people in the U.S. were receiving some form of government aid.

According to the latest data from the Bureau of Labor Statistics, the U.S. gained about 661,000 new jobs in September. Many politicos are saying that this statistic is cause for celebration. Under coventional circumstances, it would be. However, in the context of the pandemic, the number marks a slowdown in the employment recovery (see chart). 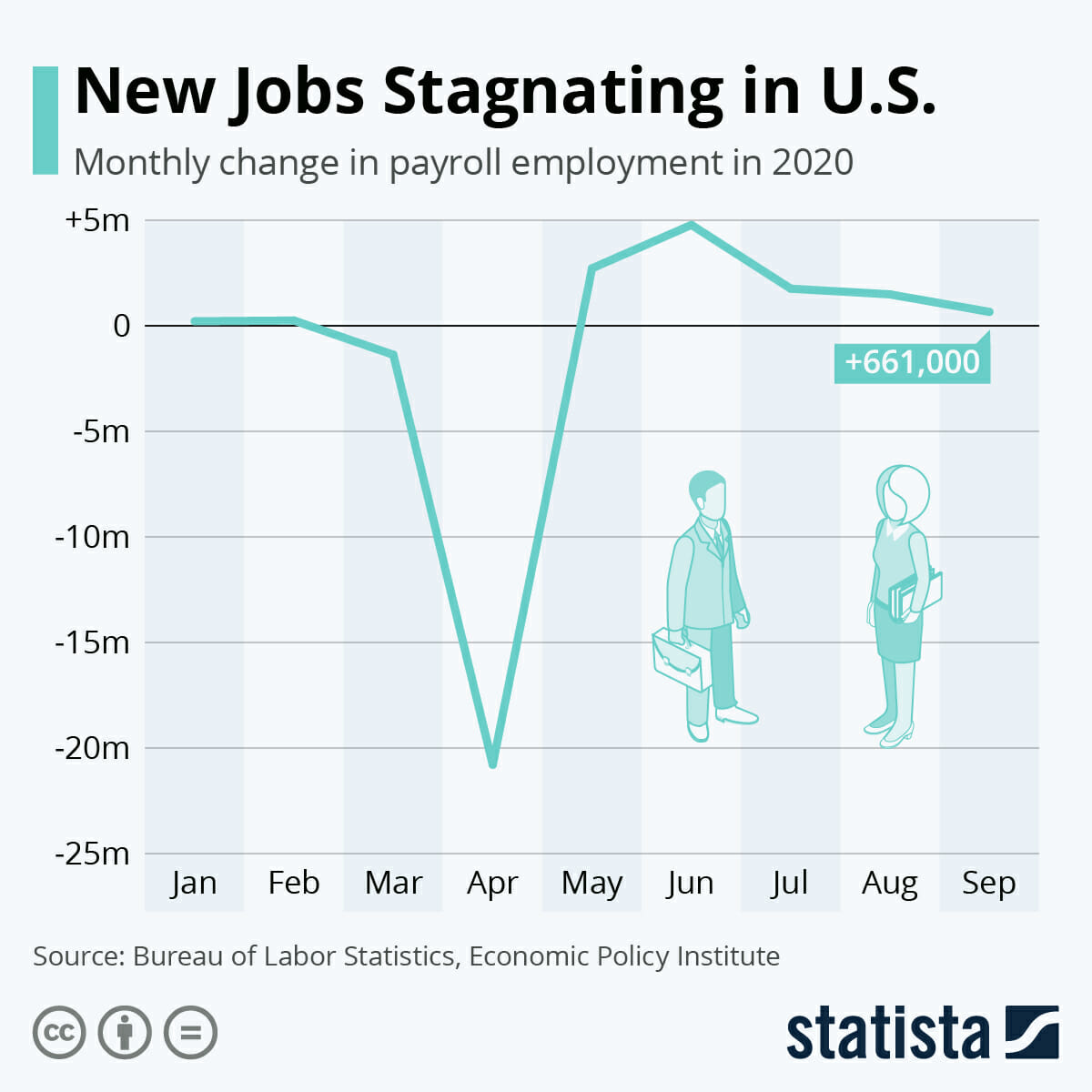 U.S. Treasury yields fell Thursday, on the weaker-than-expected jobless claims data. The bond market is trying to tell us something.

A new round of fiscal stimulus has stalled and the labor market is deteriorating. But stocks have been rising anyway.

The Dow Jones Industrial Average on Thursday rose 122.05 points (+0.43%), the S&P 500 rose 27.38 points (+0.80%), and the NASDAQ rose 56.38 points (+0.50%), as investors clung to hopes (delusional in my view) that feuding lawmakers in Washington would somehow resolve their differences and cobble together a coronavirus relief bill. Small-cap stocks were in the vanguard of the rally. Stock futures Friday were higher in pre-market trading.

In the most recent Bureau of Economic Analysis (BEA) quarterly report, U.S. gross domestic product declined by 32.9% in the second quarter. However, as long as the Federal Reserve continues to pump massive monetary stimulus into the financial markets, Wall Street feels confident enough to shrug off poor economic data.

COVID-19 is commonly blamed for the severe recession and it’s certainly the main culprit, but that’s only part of the story. New evidence arrived Thursday that the economy was starting to slow down even before the coronavirus pandemic hit the headlines.

The BEA reported yesterday that state personal consumption spending growth slowed sharply in 2019 compared to the year before. Personal expenditures grew in 2019 but by only 3.9%, down from 4.9% in 2018. We were overdue for a recession and it was starting to happen, before COVID-19 came along to significantly hasten the economic decline. That’s a narrative you’re not hearing in the press.

Earnings are weak, too…

Corporate earnings growth continues to look dismal. For the third quarter, the estimated year-over-year earnings decline for the S&P 500 is -21.0%, according to the latest estimates from the research firm FactSet.

Companies that already were struggling to meet their obligations because of a slowing economy are now taking hits to revenue and earnings because of the pandemic. Solvency will become an acute problem for certain industries, notably airlines. Hence the calls this week for federal bailouts.

Meanwhile, the coronavirus outbreak is getting worse, not better. Infections and deaths are increasing exponentially and putting a strain on ill-prepared health care systems.

We’re facing a “perfect storm” of negative earnings growth, a sputtering economy, deteriorating balance sheets, and a resurgent coronavirus. You can add the threat of election violence to your Doomsday Bingo Card.

And yet, equity valuations remain high (despite recent sell-offs). The forward 12-month price-to-earnings ratio for the S&P 500 currently hovers at about 22, above the 10-year average of about 15.

In these perilous times, an active investment approach is more important than ever. Which brings me to my colleague Jim Pearce, chief investment strategist of Personal Finance.

Jim has devised a way to make money from these market imbalances. A veteran trader with decades of profitable trades under his belt, Jim is ready to reveal his personal secrets for turning market uncertainty into your most profitable trades ever. To learn the details, sign up for his online presentation by clicking here. Jim won’t give you spin. Just profits.