Putting Overvalued Stocks to Work for You

My colleague Robert Rapier in an October 13 article explained how Exxon Mobil (NYSE: XOM) shareholders lost 25% over the past 10 years. The company made a number of bad decisions. The coronavirus pandemic didn’t help, either.

In yet another humbling turn of events for Exxon Mobil, the Dow Jones Industrial Average recently replaced the energy giant on its 30-stock index with Salesforce (NYSE: CRM), a cloud services provider.

Another colleague, Scott Chan, discussed in an October 14 article the pros and cons of short selling. In the case of Exxon Mobil, selling it short at the start of the year when it was trading above $70 and buying it back this week below $35 would have doubled your money.

As Scott went on to note, you can make a lot more money when a stock is dropping by using put options. A put option increases in value when the price of the underlying security goes down.

Just how much more money could you have made? Let’s say you bought a put option on January 2 when XOM closed near $71 at a strike price of $70. That means there was no “intrinsic value” in that option since the stock was trading above the strike price.

Furthermore, let’s assume you bought the option that expired on March 20. That means you would still pay a “time premium” for that option. The time premium reflects the potential for a stock to drop before the option expires.

At that time, the stock market was on a roll and nobody had yet heard of the coronavirus pandemic. The prevailing mood of the market was optimistic. Put options could be bought on the cheap.

Even still, let’s assume that you paid a $5 premium for that option. Since each options contract represents 100 shares of stock, a single contract would have cost you $500.

When that option expired on March 20, XOM closed beneath $32. There was no time premium left in the price of that option, but its intrinsic value was $38.

Now that we have that information, let’s see what the difference would have been between selling XOM short compared to buying a put option.

If you had sold XOM short on January 2 and bought it on March 30 to close the trade, your gross profit would have been roughly 118%. That’s a great return in such a short period of time. 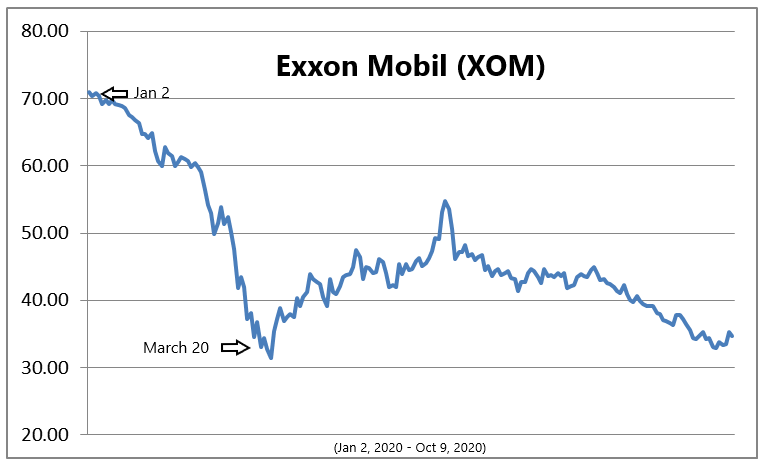 However, the return on the put option trade described above would have been 760% over the same span! You paid $5 for it and got $38 back when it expired.

You could have done even better than that. While the overall stock market was nosediving in March, the time premium on put options skyrocketed. If you had timed it perfectly, your return could have approached 1,000%.

Granted, that was an extreme case during an unusual time. However, I think something similar is about to happen to dozens of other companies very soon. If so, then buying put options could prove to be especially lucrative.

The trick, of course, is in figuring which stocks are about to take a turn for the worse. One way to do that is to look at the stocks that have the highest levels of short interest. The short interest ratio compares how many shares are currently sold short versus the total number of shares trading.

We will soon know how those short trades worked out when these companies release their quarterly results later this month.

Another way to identify expensive stocks is to compare their share prices to earnings, sales, and book value. For example, at a recent share price of $442, Tesla (NSDQ: TSLA) is valued at more than 100 times forward earnings. That is four times the 25 multiple for the S&P 500 Index.

No matter how you measure it, Tesla appears to be an overvalued stock. However, that does not necessarily make Tesla a good candidate for buying a put option. Tesla founder Elon Musk enjoys a cult-like following among Tesla’s loyal shareholders. No matter how many times the company comes up short on one of Musk’s promises, the stock just keeps going up.

Also, put options on Tesla are expensive. For example, a few days ago a put option expiring on January 15 at the $440 strike price cost $64. That means TSLA would have fall 15% before that trade is profitable.

I don’t like those odds. But what I do like is a play on one of Tesla’s suppliers that you’ve probably never heard of. A few weeks ago, Tesla announced that it will soon break ground on a facility that will produce the same material it buys from this company. When that happens, this company could lose its biggest customer.

Since the company in question is headquartered in a remote area of South America, nobody on Wall Street paid much attention to it. But my system immediately picked up on it, and earlier this week I issued a trade alert to cash in before the end of the year.

It’s not too late for you to join us, and I’ll explain how you can do that in a free tutorial if you CLICK HERE.