As a baseball fan during the coronavirus pandemic, I’ve had to endure a 162-game season distilled to 60 games (with my team the Red Sox in last place and out of the playoffs). In the absence of adrenaline-pumping sports, it takes discipline to avoid impulsive online day trading.

Indeed, some analysts have noted that the dearth of live sports during the pandemic has prompted restless, home-bound investors to gamble on stocks, helping fuel the market’s comeback from its lows in March. We’re witnessing an influx of highly leveraged individual investors piling into the overvalued “story stocks” they see touted on CNBC.

This activity adds risk to the market, because inexperienced traders tend to run for the exits when confronted with bad news. They’ve never faced prolonged market declines and they’re not well diversified.

Excessive speculation by novices serves as a red flag that the market has reached a top and a correction is looming. Amid the backdrop of a pandemic-induced recession, the rally could be a house of cards.

Read This Story: These 3 Risks Could Tank the Stock Market

The big reality check for investors starts today, when third-quarter earnings season kicks off in earnest. Thirty S&P 500 companies, including six Dow Jones Industrial Average components, are scheduled to report operating results this week for the third quarter of 2020.

According to FactSet, the projected Q3 earnings decline for the S&P 500 is -20.5%. If that percentage turns out to be the actual decline for the quarter, it will mark the second largest year-over-year decline in earnings reported by the index since Q2 2009 (-26.9%).

The pandemic has made it difficult for companies to issue guidance with reasonable certainty. Second-quarter earnings generally exceeded estimates; analysts are expecting the same for Q3. Typically, a high percentage of companies beat earnings expectations every quarter (see chart). 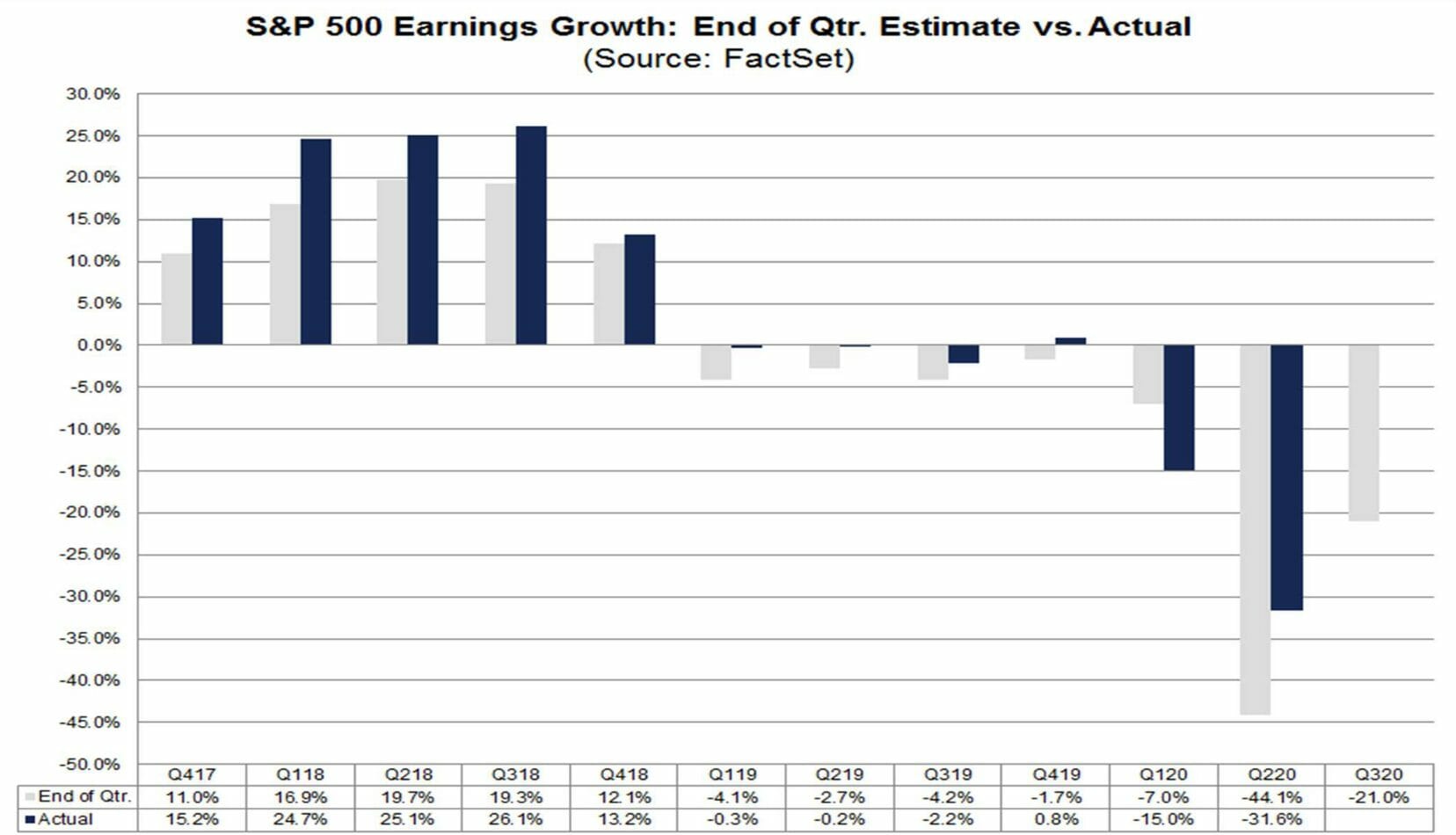 Over the past five years on average, actual earnings reported by S&P 500 companies have exceeded estimated earnings by 5.6%.

Health care and utilities on top…

The two sectors expected to perform the best in Q3 are health care and utilities. The two worst are industrials and energy (see chart). 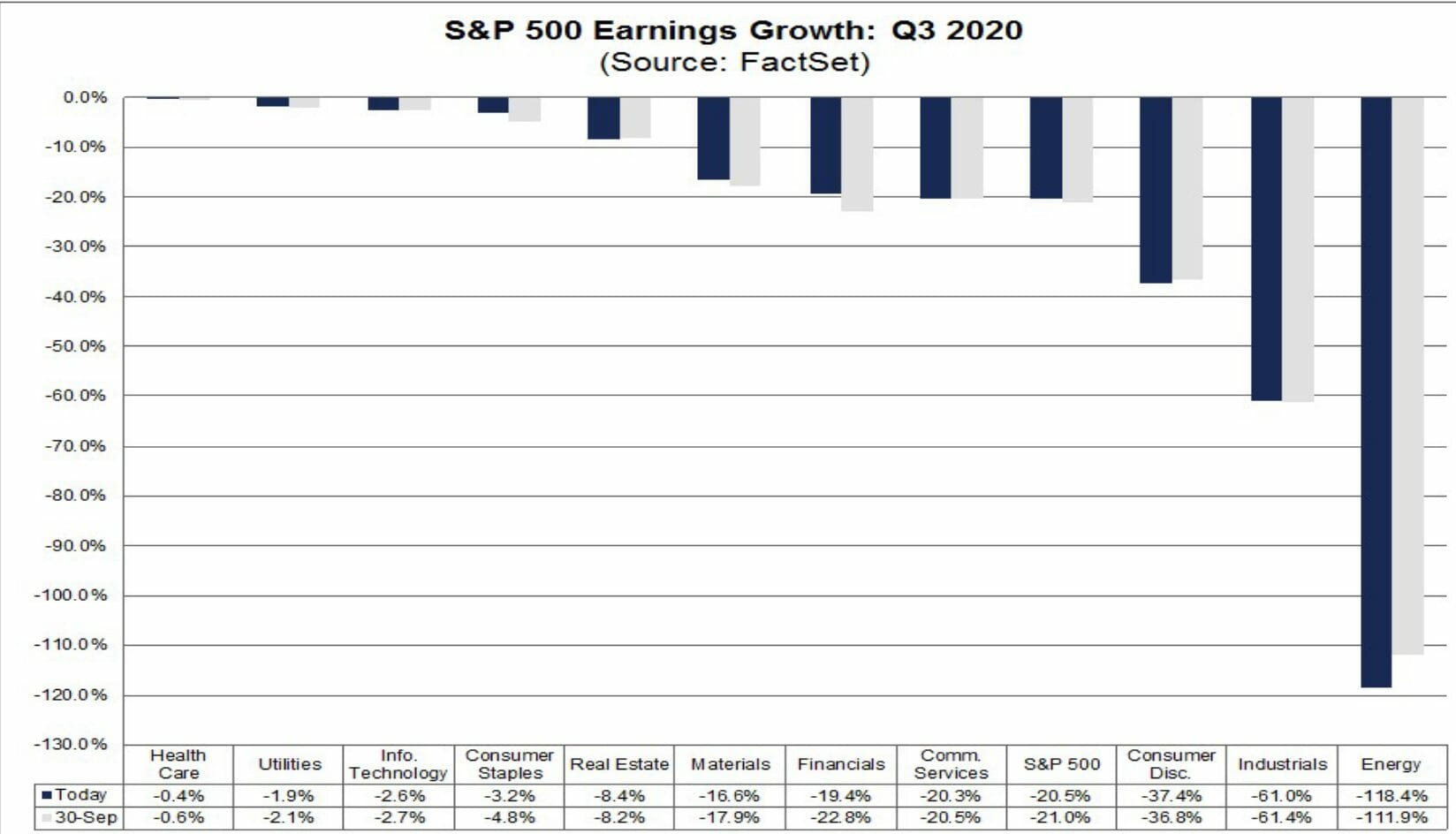 Under current conditions, it makes sense to rotate toward “essential services” plays such as health care and utilities. Despite economic ups and downs, people still need medical attention and electricity. As the managing editor of our premium trading service Utility Forecaster, I enjoy a front-row seat to the steady performance of utilities stocks.

In a severe and extended downturn, such as the one we witnessed during the 2007-2009 Great Recession, utilities typically do an excellent job of retaining their value relative to the overall market.

Consider this: investors in growth stocks suffered losses of between 40% and 60% in 2008, while the average portfolio of Utility Forecaster was down only 18.2%, according to data from The Hulbert Financial Digest.

Throughout the savage 2008 downturn, utility stock investors enjoyed reduced losses and a steady stream of dividends. For a list of the best dividend-paying utilities stocks now, click here.

Recession-resistant plays are prudent choices now, but economic recovery should pick up steam next year, making small stocks and cyclicals appealing assets after the presidential election is over.

Watch This Video: The Post-Election Calculus

I’ve warned you all year that a major infrastructure bill isn’t likely in 2020. But next year? We’ll probably get one, regardless of who wins the White House.

The crumbling infrastructure of the United States presents a litany of woes that are unworthy of a superpower: unreliable mass transit; collapsing bridges; exploding tanker cars; leaking pipelines; pockmarked roads and highways…the list goes on. This pressing need is a huge moneymaking opportunity for investors, when the time is right.

Whether Democrat Joe Biden or Republican Donald Trump wins in November, an ambitious infrastructure spending plan is likely to land on the president’s desk next year. Odds of infrastructure spending are even greater, considering the need for fiscal stimulus to combat economic damage from coronavirus. This mega-trend will be manna for construction-related stocks and the financial markets as a whole.

But before we get to 2021, we need to get through the rest of 2020, a year of tribulations to say the least. Keep plenty of cash on hand, for aggressive buying of risk-on assets that end up on the bargain shelf in 2021.

In the meantime, if you’re looking for investment opportunities in the big “reset” that’s unfolding throughout the American economy, click here for our special report.