This November will be remembered as one of the most historically significant election cycles in American history. The White House, Congress and several governorships are at stake. The Trump-Biden presidential race is a take-no-prisoners battle with long-lasting implications.

However, we also face a watershed election for marijuana, with a slew of initiatives on state ballots. By the time the voting is over next month, about 18 states could see some form of new cannabis legalization on the books.

Have you ever wondered why marijuana is banned at the federal level in the United States? You can thank Harry J. Anslinger.

Anslinger served as the first commissioner of the Federal Bureau of Narcotics during the presidencies of Hoover, Roosevelt, Truman, Eisenhower, and Kennedy. The bureau was the precursor of the modern-day Drug Enforcement Administration and Anslinger was the architect of marijuana prohibition.

Anslinger played the key role in the introduction and passage of the Marijuana Tax Act of 1937, which outlawed possessing or selling pot. Anslinger told the nation: “[Young people] are slaves to this narcotic, continuing addiction until they deteriorate mentally, become insane, turn to violent crime and murder.”

Today, Mr. Anslinger would be appalled. In many U.S. cities, you can waltz into a dispensary and buy marijuana as if you were buying a pack of gum. The 2020 Democratic ticket for the White House wants to make marijuana procurement even easier.

U.S.-listed marijuana stocks have been surging over the past few days and the direct catalyst is clear. At last Wednesday’s debate, Democratic vice presidential candidate Kamala Harris vowed that marijuana would be decriminalized at the federal level in the U.S. under a Biden administration.

Several states have legalized marijuana, but banks and other financial institutions have been reluctant to provide services to the industry because cannabis remains federally illegal. The Biden-Harris ticket wants to mainstream marijuana, whereas the Trump administration is resistant.

Sen. Harris is the lead sponsor of the Marijuana Opportunity, Reinvestment and Expungement (MORE) Act, which seeks to end federal prohibition of marijuana.

Harris’ antagonist in last Wednesday’s debate, Vice President Mike Pence, voted consistently against marijuana-friendly legislation when he was a member of the House. More recently, he has criticized Democrats for including language to increase marijuana businesses’ access to banking services in coronavirus relief legislation. Anti-marijuana prejudices that became entrenched during the War on Drugs are slow to die.

The Biden-Harris ticket is far ahead in the national polls. If a “Blue Wave” occurs in November as most political analysts expect, the legalization of marijuana at the federal level will be a slam-dunk. The time to position your portfolio is before the election. (Remember the old Wall Street adage: Buy on the rumor, sell on the news.)

Even if President Trump gets reelected, marijuana legalization will continue to enjoy tailwinds at the state level. For investors this November, it’s a win-win.

Why stay abreast of marijuana laws and regulations? If dispensaries and cultivators aren’t diligent in following the ever-changing laws and regs set forth by their state and local governments, they face increased risk of investigation and raids, licensure suspension, hefty fines, and even possible arrests by federal agents and prosecutors.

The overall trend is toward legalization, but the legal landscape still constitutes a minefield. These dangers by extension affect investors. Let’s look at developments that took place in recent days.

Michigan Gov. Gretchen Whitmer (D) on Monday signed a bill allowing people to apply to have their prior marijuana convictions expunged. It’s part of a package of broader legislation to help people clear their records.

However, in yet another sign that bias against marijuana is alive and well, Gov. Reeves took the opportunity to criticize broader marijuana reform as voters prepare to decide on two competing medical cannabis ballot measures in November (see the following tweet): 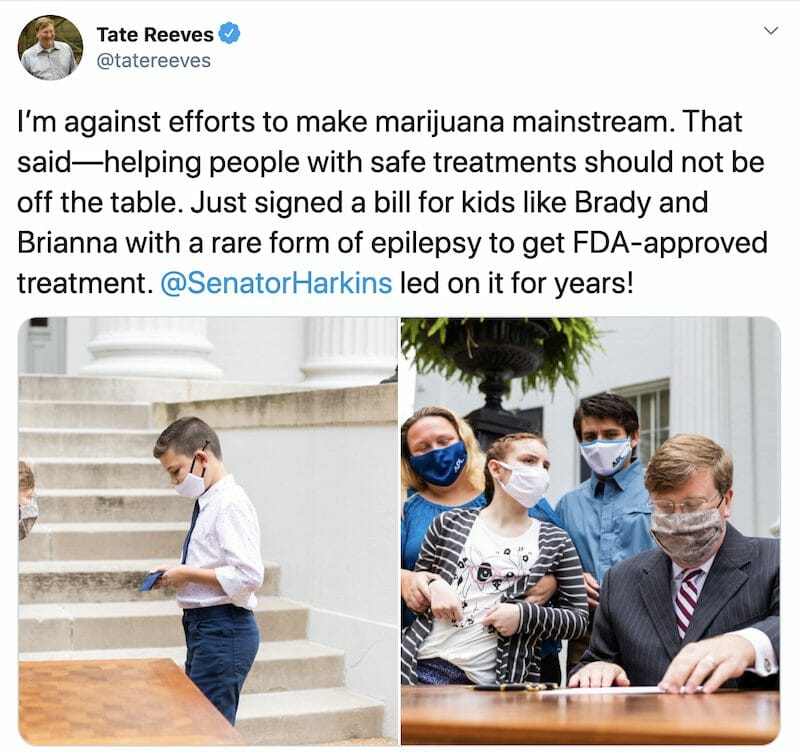 On the ballot in Mississippi are two measures to legalize medical cannabis. But the situation is complicated. After the activist-led initiative qualified for the ballot, the legislature approved an alternative proposal that will appear with it. Advocates say this was a deliberate attempt by anti-marijuana forces to confuse people, split the vote and torpedo a state-wide medical marijuana system.

On the ballot in South Dakota is a proposal to legalize marijuana for adult use and a separate measure to legalize medical cannabis. If approved by voters, the constitutional adult-use amendment would allow people 21 and older to possess and distribute up to one ounce of marijuana, and they also would be allowed to cultivate up to three plants.

The statutory medical cannabis measure would allow patients suffering from debilitating medical conditions to possess and purchase up to three ounces of marijuana from a licensed dispensary. South Dakota is one of 11 states where both recreational and medical marijuana are currently illegal.

On the ballot in Arizona is an initiative to legalize marijuana for adult use. Under the measure, adults could possess up to an ounce of marijuana at a time and cultivate up to six plants for personal use.