The Pandemic’s Financial Risks: Echoes of 1987?

Today is a dubious anniversary: “Black Monday,” the market crash of October 19, 1987. Thirty-three years ago, stock markets around the world collapsed. The meltdown started in Hong Kong and spread west to Europe. The United States was hit after other markets had already plunged.

At the time, Black Monday represented the single largest drop the U.S. stock market had ever experienced. Program trading bears much of the blame for the crash. Institutions use these programs as a hedge against market weakness. Three decades ago, this complexity was new and little understood.

Leading up to the crash, warning signs were abundant. The economy was slowing. International tensions were worsening. Political unrest was growing in Europe. The U.S. and China were at economic loggerheads.

Nuclear tensions were flaring between East and West. Stocks were grossly overvalued. The strong U.S. dollar was hurting U.S. exports. The White House was dismantling financial rules designed to brake a market collapse. Passive algorithmic trading was spreading as a substitute for active stock picking.

Yikes! Sound familiar? It should. I don’t think another 1987-type crash will occur anytime soon, but we’re probably facing a correction over the near term of at least 5% to 10%. Below, I examine current risks. I also steer you toward an investing method that leverages these imbalances for profit.

There’s always a tug-of-war between the bulls and bears, but the coronavirus pandemic has made these competing tensions even more intense.

One moment, fiscal stimulus seems alive; the next it’s dead. A biotech firm announces progress on a new COVID-19 vaccine; hours later the treatment is pulled for safety reasons. Through it all, stocks are yanked back and forth.

The three major U.S. stock market indices showed increased volatility last week amid a mixed bag of headlines, but managed to claw their way into the green. Investors clung to hopes for new fiscal stimulus before the November election and the imminent emergence of a coronavirus vaccine. Those are two unlikely occurrences in my view.

Among the positive news were stronger-than-expected U.S. retail sales for September, whereas jobless claims took a turn for the worse.

The number of Americans filing new applications for unemployment benefits jumped last week to the highest level since late August. The U.S. Labor Department reported last Thursday that initial jobless claims in regular state programs totaled 898,000 in the week ended October 10, up 53,000 from the prior week.

The 898,000 level represents the seventh straight week that initial claims came in below the 1 million mark, but new claims have persistently hovered above 800,000 for as many weeks. Temporary job losses are becoming permanent. 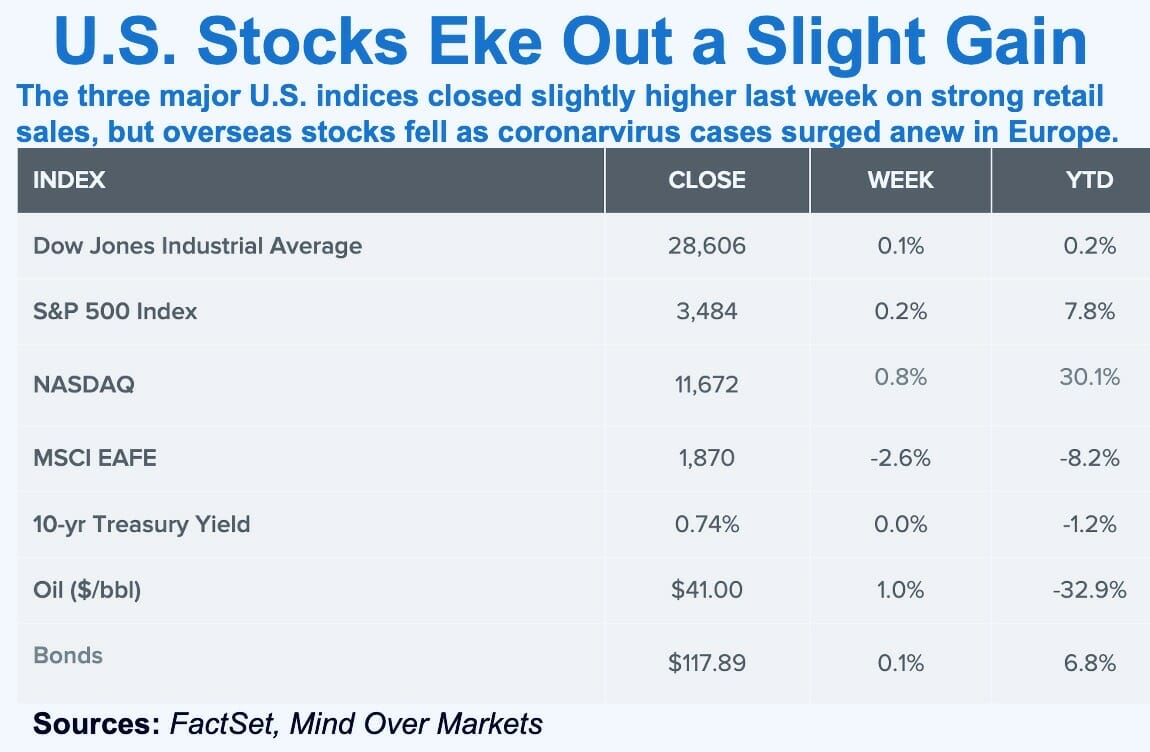 Overseas stocks fell, largely due to an alarming spike in coronavirus cases, especially in Europe. The pandemic Pollynannas are getting contradicted by science.

The pandemic has created separate economies and stock markets. Lockdowns have hastened the transition to reliance on digitization, fueling gains in Big Tech stocks and making tech investors even wealthier. At the same time, traditional industries (manufacturing, transportation, hospitality, energy, etc.) have suffered and their shares have slumped.

The Federal Reserve has come to the rescue of financial markets and global corporations, but Fed programs designed to help smaller businesses and municipalities have broken down because of bureaucratic snafus and a lack of political will to follow through. Wall Street prospers and Main Street suffers, although ultimately both need each other.

Read This Story: Q&A: Key Market Drivers During the Pandemic

In this bifurcated condition, the economic recovery will never reach its full potential. It remains to be seen whether the stock market’s rise can show greater breadth beyond the leadership of tech stocks. As the NASDAQ’s performance in the above table shows, technology continues to lead the rally.

The flood of misinformation in the media is exacerbating uncertainty on Wall Street. We’re constantly bombarded by lies, spin and conspiracy theories about COVID-!9.

In this news maelstrom, biotech companies are announcing progress on vaccines with scant laboratory proof whereas some clinical trials are halted due to safety concerns. Remain skeptical about the press releases, tweets and rumors about vaccines. Much of it is fodder for insider trading and political demagoguery.

Indeed, news reports surfaced last week that major institutional investors have been acting on tips about the pandemic from White House officials. It brings to mind Boesky, Milken, and the rampant insider trading that helped cause the 1987 crash. The machinations of Gordon Gekko are back.

No one understands these contradictions and market distortions better than my colleague, Jim Pearce.

A veteran trader with decades of profitable trades under his belt, Jim is ready to reveal his trading system that makes money from the market’s mayhem. He knows how to pinpoint overvalued stocks and harvest a windfall from their day of reckoning.