I have to shake my head at how the mainstream media are largely ignoring the abundance of marijuana initiatives on state ballots this November. But that’s why we created this publication — to deliver timely, actionable cannabis-related news and analysis that you’re not getting anywhere else.

Most of the proposed marijuana initiatives this electoral season are on track to getting approved by voters, a milestone that would further open the floodgates for new individual investment, initial public offerings, and venture capital. Let’s quickly review the legal, regulatory and financial landscape pertaining to pot.

As November 3 approaches, investors are getting excited about the various pro-marijuana initiatives on the ballot. Marijuana stocks have embarked on a market-beating winning streak that probably enjoys long-term momentum.

So far during the month of October, the cannabis benchmark exchange-traded fund Horizons Marijuana Life Sciences Index ETF (HMMJ) has risen 8.2%, compared to 2.7% for the S&P 500 Index (as of market close October 19).

Investors tend to gravitate toward the large-cap players, which in many ways makes sense. The bigger companies offer more stability. However, you should also consider small-cap marijuana companies, generally defined as between $300 million and $2 billion in valuation.

These marijuana small fry typically don’t sport the baked-in premiums of the larger and better known marijuana “story stocks”; they make appealing takeover targets; they tend to be better focused on their core products and services; and they’re more prone to enter into business-building partnerships with huge consumer giants.

In any sector, small-cap stocks on average have dramatically outperformed all other types of stocks over the long-term. Many small-cap stocks are under-followed and ignored by Wall Street, which leads to investor neglect and undervaluation (i.e., inefficiency). In today’s dicey investing environment, the virtues of “value” have come to the fore.

Now’s the time to jump aboard reasonably priced small-cap marijuana companies, as their momentum builds before the historic election in November. I steer you toward a source for these stocks, below.

The (pungent) winds of political change…

By the end of 2020, nearly all U.S. states could end up allowing some form of legal marijuana, although weed remains illegal on the federal level. The official platform of Democratic presidential nominee Joe Biden states:

The stance of President Trump is far different. Trump has indicated that marijuana should remain illegal at the federal level. The president also has turned the U.S. Department of Justice (DOJ) against state legalization efforts.

Regardless of who wins the White House in November, the legalization of marijuana at the state level has gathered the velocity of a freight train and the feds can’t stop it.

According to the marijuana market research firm New Frontier Data:

“The 2020 election could be one of the most consequential and historical events to change the landscape of the legal U.S cannabis industry.”

As it stands now, 11 states and the District of Columbia have legalized marijuana for recreational purposes; nine through statewide citizen-initiated ballot measures, and two through state legislative processes. In addition, 33 states and DC have passed laws legalizing or decriminalizing medical marijuana (see chart). 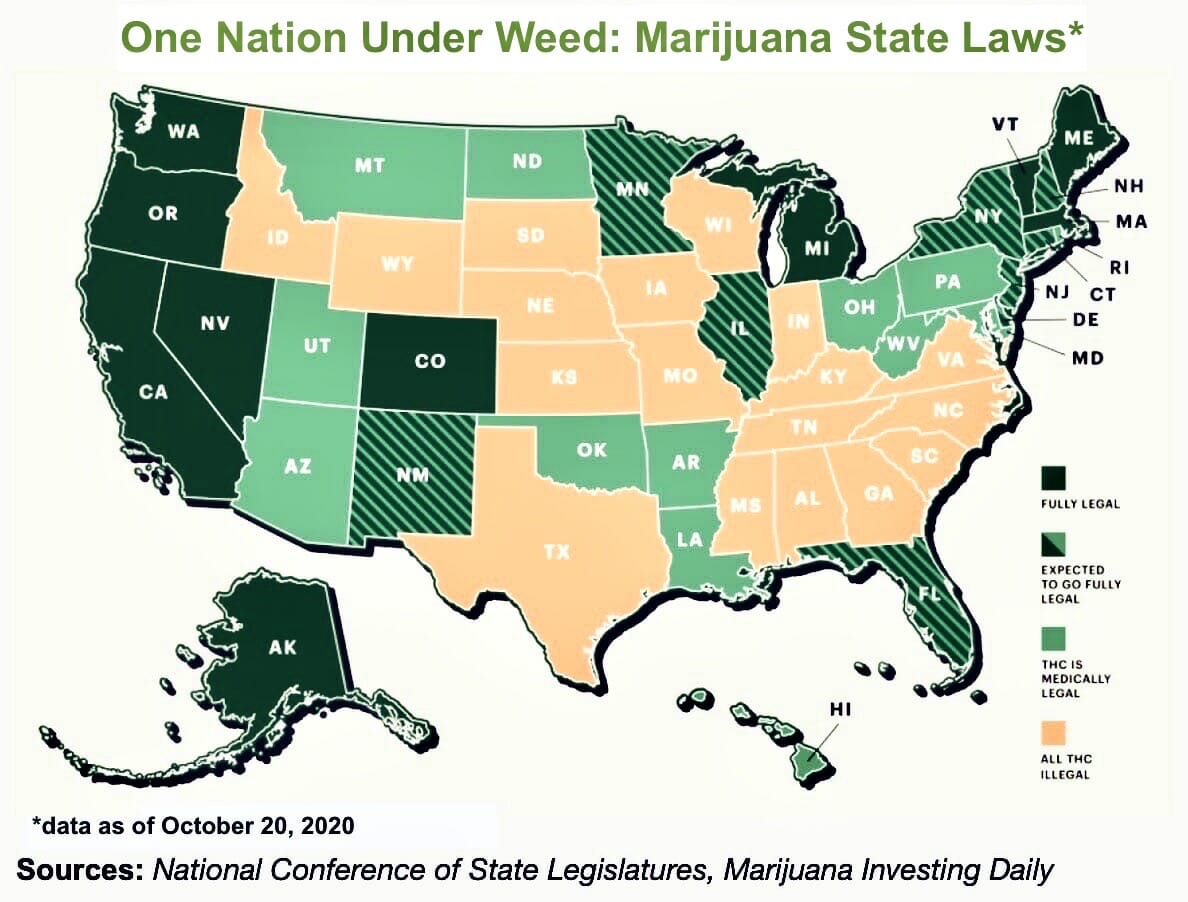 Although Trump and social conservatives oppose lifting restrictions on marijuana, the effort is gaining bipartisan support.

In a town hall this week, U.S. Rep. Alexandria Ocasio-Cortez (D-NY) discussed how more Republicans are joining Democrats in working to reform pot laws and end the war on drugs:

“We’ve been able to propose solutions on a wide spectrum towards decriminalization, towards legalization, and that is increasingly becoming a position that more Republicans are amenable to…There are some areas where you can find common ground.”

With so much volatility in the broader stock market these days, how can you pinpoint stable equities in the pot sector? That’s where the experts at Investing Daily can help.

We’ve put together a presentation that conveys the highest-quality value plays in cannabis. These smaller pot companies are largely immune to the panicky sell-offs triggered by the coronavirus epidemic.

But you need to act quickly, before the investment herd discovers these hidden gems and bids up their share prices. Click here for details.