The Pandemic Meltdown: Could It Happen Again?

During the Reagan era, I worked in Congress as a press secretary. It wasn’t very glamorous. The job entailed long, arduous hours and I had to contend with a lot of massive egos. But I learned timeless lessons about politics and forged lifelong friendships.

Amid this year’s presidential election and pandemic-induced economic damage, one of those lessons comes to mind. When markets are in trouble, the phrases from politicians are the same: “The economy should hold up fine” or simply “The fundamentals are sound.” Whenever I hear those words, I know that something is terribly wrong.

I’ve been hearing those phrases lately from leaders in Washington, even as the battered U.S. economy backslides and the coronavirus pandemic surges. Are we headed for sell-offs similar to the ones in March? Below, I’ll examine the forces in place that could be paving the way for another calamity. I’ll also show you how to buffer your portfolio.

Hopes are dimming for a new round of fiscal stimulus. The White House and congressional Democrats on Wednesday moved closer to a coronavirus relief package, but they’ve run into implacable opposition from the GOP-led Senate, which finds Democratic demands profligate.

Without fiscal stimulus, the recession will probably deepen as coronavirus cases soar. A major factor keeping stocks afloat is unprecedented monetary stimulus from the Federal Reserve. This stimulus is helping financial markets but not necessarily the economy.

The Fed released the findings of its “Beige Book” Wednesday, which showed that the U.S. economy is continuing to recover through early October, but at a snail’s pace. The stock market’s reaction was negative. The Dow Jones Industrial Average fell 97.97 points (-0.35%), the S&P 500 shed 7.56 points (-0.22%), and the tech-heavy NASDAQ slipped 31.80 points (-0.28%). In pre-market futures trading Thursday, all three main indices were trading in the red.

The Fed has kept stocks from imploding by injecting liquidity into the financial system, but the U.S. central bank has done little to address imbalances that still threaten to harm investors. An international regulatory body wants to change that.

Global investigators are delving into what caused the near collapse of the financial system in March. The culprits they’ve pinpointed so far are major financial players that are barely regulated. This investigative group, called the Financial Stability Board (FSB), plans to release a report with recommendations in November.

As coronavirus-frightened investors dumped securities and fled to cash in March, the financial system came under enormous pressure, prompting the Fed to ride to the rescue with an aggressive bond-buying program. The Fed restored the functioning of capital markets but didn’t address underlying weaknesses.

The FSB is focusing on the role of non-banks, aka “shadow banks,” because they operate on the margins of conventional regulatory parameters. This group of funds, lenders, and intermediaries wield enormous clout but remain largely unaccountable.

Shocks to the system…

The FSB currently seeks to prevent another March 2020. The following chart depicts the pain endured: 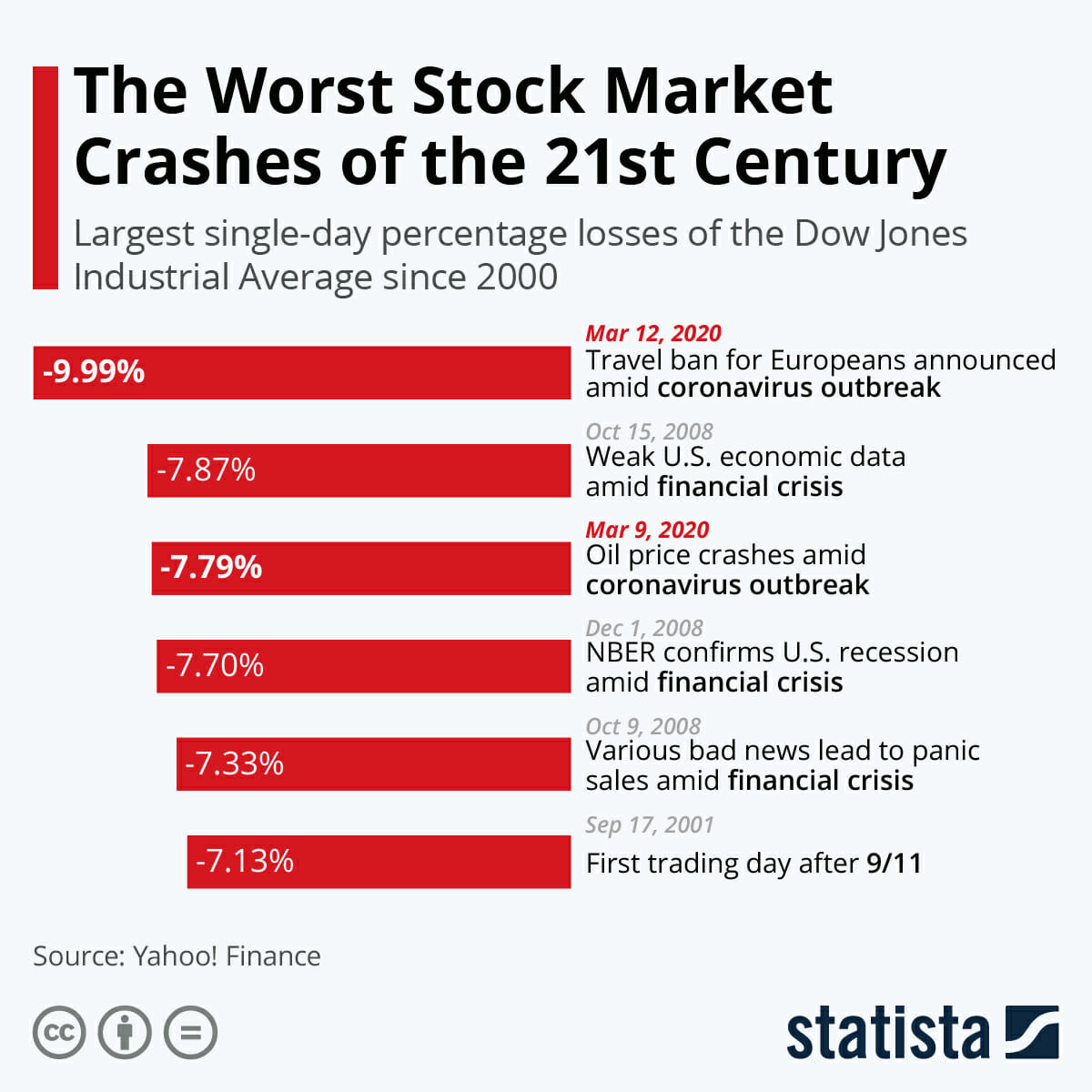 During those dizzying drops in March, “circuit breakers” went into effect. Regulators would rather not see those breakers tripped again, because it’s not clear whether they make things better or worse.

Circuit breakers are interventions mandated by regulation to temporarily halt trading on an exchange. The idea is to give panicked investors a chance to catch their breath, before trading spirals out of control. Circuit breakers apply both to broad market indices such as the S&P 500 as well as to individual securities.

Circuit breakers function by automatically halting trading when prices hit predefined levels, i.e. a 7%, 13%, or 20% intraday move for the S&P 500. Regulators put the first circuit breakers in place following the market crash of October 19, 1987, aka “Black Monday,” when the Dow shed 508 points (22.6%) in a single day.

Read This Story: The Pandemic’s Financial Risks: Echoes of 1987?

In March 2020, circuit breakers were triggered twice on the New York Stock Exchange as the Dow plunged due to the fast-spreading coronavirus pandemic and disappointment with government inaction. The problem is, the activation of circuit breakers can feed the sort of fear and impulsive trading that they’re designed to curb.

Bankers and industry-friendly regulators in recent years have been laying the groundwork for another financial catastrophe, by pushing for deregulation and embracing the risky practices that caused previous crises.

During my years on Capitol Hill, I witnessed the boom-bust cycle first hand. The bull market had begun in 1982, as President Reagan’s free-market policies unleashed “animal spirits” in the economy. After the malaise of the Carter years, vibrancy had returned to American capitalism.

By the autumn of 1987, the markets were humming. But rampant speculation, excessive valuations, program trading, a slowing economy, and criminal stock manipulation all converged to trigger a financial Chernobyl in October. It could happen again.

Under the dicey conditions I’ve just described, it’s small wonder that gold prices have soared. During times of uncertainty, such as we face today, investors rely on gold as a hedge against unforeseen crises.

Financial instability is a danger for risk-on assets, but it’s manna for gold. When the market crashes, money flees to safe haven assets, chief among them the yellow metal. Every portfolio should have exposure to gold, especially now. For details on our favorite gold play, click here.