A recent surge in COVID-19 here and in Europe is weighing heavy on the stock market this week. In France, curfews have been reinstated in several large urban areas to mitigate the spread of the disease. The fear is that many cities in the United States may soon follow suit.

If that happens, we may see a spike in unemployment in the months to come. Also, many small businesses, especially restaurants, may not survive through the winter if they must once again shut their doors to in-store customers.

The gig economy relies on two essential elements for its growth:

At that time, I noted that Fiverr International (NYSE: FVRR) had already gained more than 400% over the previous twelve months. During the past month, FVRR traded up to $185 before falling back to $160 at the start of this week.

Despite that pullback, FVRR is still up another 50% since I last wrote about it in August. By the time you read this, Fiverr will have released its Q3 results on October 28. If those results are good then FVRR may continue its ascent up the charts.

Trading Up Works Out

For that reason, I recommended buying call options on Fiverr’s only major competitor, Upwork (NSDQ: UPWK). A call option increases in value when the price of the underlying security is rising. 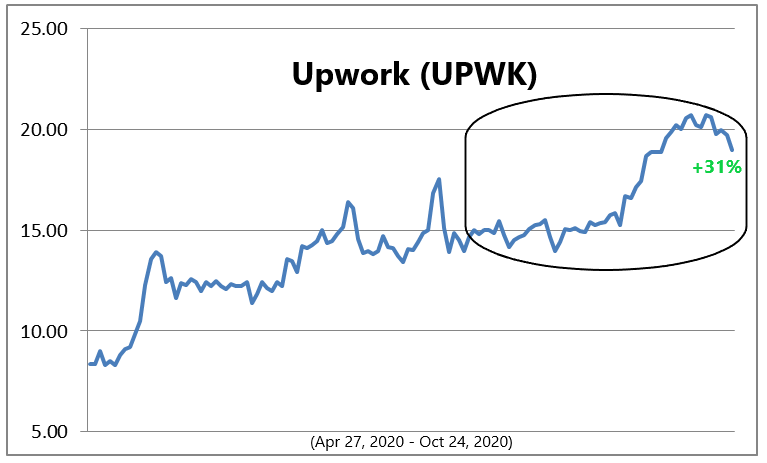 That should get your attention. During a period of time when the overall stock market was going nowhere, this trade nearly doubled your money.

Normally, I would seriously consider closing out an option trade with that much gain in it. Especially now, with COVID-19 on the rise and the general election coming up on November 3.

To further complicate matters, Upwork is scheduled to release its Q3 results the day after the election. Depending on the initial outcome of the election, the stock market could be under a lot of stress next week.

Read This Story: The Industries Hardest Hit by COVID

However, all those uncertainties may play in Upwork’s favor. Wall Street may be looking for businesses that would benefit from another economic downturn.

Frankly, that list may start getting short very soon. Seven months ago, most companies were flush with cash and were fully staffed. That is no longer the case. Many of them are out of money and have already reduced staff as much as they can without closing down altogether.

Regardless of how third-quarter results turn out for Fiverr or Upworks, investors should focus on the future. Demand for both companies’ services could explode over the winter if the coronavirus pandemic continues its recent pace.

The gig economy is the solution to many problems at the moment. If you are unemployed, it is a source of immediate income for as long as you need it. If you are an employer needing to cut costs, it allows you to pay only for what you need. And since all of the work is done remotely, there is no risk of spreading COVID-19.

The big difference between now and three months ago is market sentiment. During the summer, optimism squashed any concerns about a second wave of COVID-19 potentially shutting down the economy again this winter. Now, the bears are coming out of hibernation as that threat appears increasingly likely to occur.

That means options premiums are also on the rise. The price of an option reflects the amount of potential volatility in a stock until that option expires. It will cost you a lot more today to buy most options than it would have a few months ago.

For that reason, you may be better off being an option seller in this market. That requires considerably more skill than buying options, and I happen to work with one of the best in the business at doing just that. His name is Jim Fink.

Jim Fink, chief investment strategist of Jim Fink’s Inner Circle, has devised a proprietary options trading strategy that racks up profits regardless of the pandemic, economic downturn, or political turmoil.

Jim has come up with an election trade that’s poised to pay off with big profits, no matter what happens on November 3. Make this one trade before election night, and you’re 95.96% likely to win. Get the details by clicking here.