Pot and Politics: A Blunt Guide

Before the trend toward marijuana legalization took off in earnest in the 1990s, marijuana use could ruin a politician’s career, get a person fired, or result in lengthy prison time. Now, marijuana consumption is not only countenanced by authorities, it’s also encouraged by health experts as beneficial.

As someone who came of age during the 1970s, when the establishment waged war against marijuana, I’m still taken aback by the cultural transformation of cannabis. It serves as a reminder to investors of all types: anything is possible!

How mainstream is marijuana these days? Research firm New Frontier Data reports that 98.6% of the U.S. population is living in a state with a legal cannabis market. That’s an eye-opening statistic.

According to New Frontier:

This autumn, the political winds are accelerating these trends. In terms of tangible initiatives and lofty rhetoric, marijuana is increasingly embraced by lawmakers as the November 3 elections loom. Below, I provide a snapshot of the latest developments.

New York Gov. Andrew Cuomo (D) recently said the state will legalize marijuana “soon” to help with the economic recovery from the coronavirus pandemic: “We need revenue and we’re going to be searching the cupboards for revenue. And I think that is going to put marijuana over the top.”

Lawmakers in New York failed to legalize marijuana in 2019. However, Gov. Cuomo has stated that marijuana legalization is a priority for his administration and he vows to push hard to decriminalize recreational pot in the Empire State.

Sentiments like Cuomo’s are generating a tailwind this electoral season that’s generally lifting marijuana stocks. The September-October rally in pot equities is a welcome contrast to the correction the sector suffered in late 2019.

Blue states that allow ballot petitions have for the most part voted to legalize marijuana, notably California and Massachusetts. Activists are now venturing into red territory.

Nebraska medical marijuana activists are collecting signatures for a 2022 ballot measure after the state Supreme Court in September blocked this year’s initiative. The justices ruled the proposal violated the state’s single-subject rule by covering too many topics. The solution of pro-marijuana activists? The new initiative is just one concise sentence long (see image below): 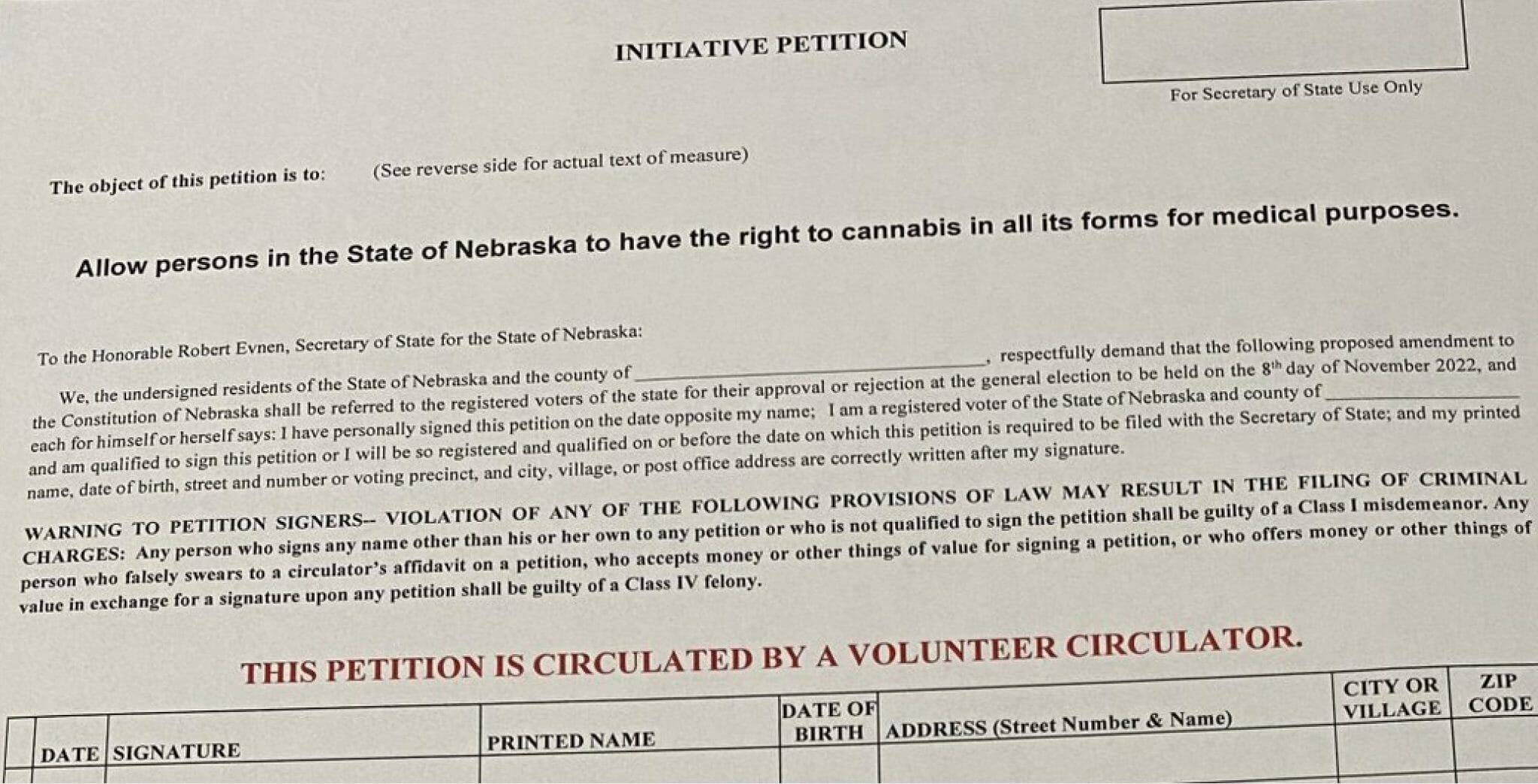 On the ballot in Oregon is a measure to legalize psilocybin fungi (aka “magic mushrooms”) for therapeutic purposes and a separate initiative to decriminalize possession of all illicit drugs while investing in substance abuse treatment.

Under the mushroom measure, adults would be able to access the psychedelic in a medically supervised environment.

The decriminalization initiative (Measure 110) would remove criminal penalties for low-level drug possession. It would also use existing tax revenue from marijuana sales, which voters legalized in 2014, to fund expanded substance abuse treatment.

A-list celebrities are lending their clout to marijuana measures across the nation. The pot prohibitionists haven’t given up, though. Notable case in point: South Dakota Gov. Kristi Noem (R) appears in a new television ad urging voters to reject marijuana legalization initiatives that are on the state’s ballot. As Gov. Noem says in the ad: “The fact is, I’ve never met someone who got smarter from smoking pot.”

On the ballot in South Dakota is a proposal to legalize marijuana for adult use and a separate measure to legalize medical cannabis. If approved by voters, the constitutional adult-use amendment would allow people 21 and older to possess and distribute up to one ounce of marijuana, and they also would be allowed to cultivate up to three plants.

The statutory medical cannabis measure would allow patients suffering from debilitating medical conditions to possess and purchase up to three ounces of marijuana from a licensed dispensary.

As the above voter initiatives show, the commercialization of marijuana enjoys powerful momentum. New laws that lift pot restrictions result in new markets for the purveyors of weed.

After painstaking research, we’ve pinpointed cannabis investments with the greatest profit potential. Click here for our report on the best pot stocks.