Utility Stocks Soar Above The Rest

The last time I discussed utility stocks in this space was nearly six months. At that time, the stock market had regained nearly half its losses from earlier in the year. The long-term economic consequences of the coronavirus pandemic were, and still are, largely unknown.

Although less extreme in its movements, the utility sector has also eked out a small gain this year. Through last week, the Utilities Select Sector SPDR Fund (XLU) had returned 2.8%. 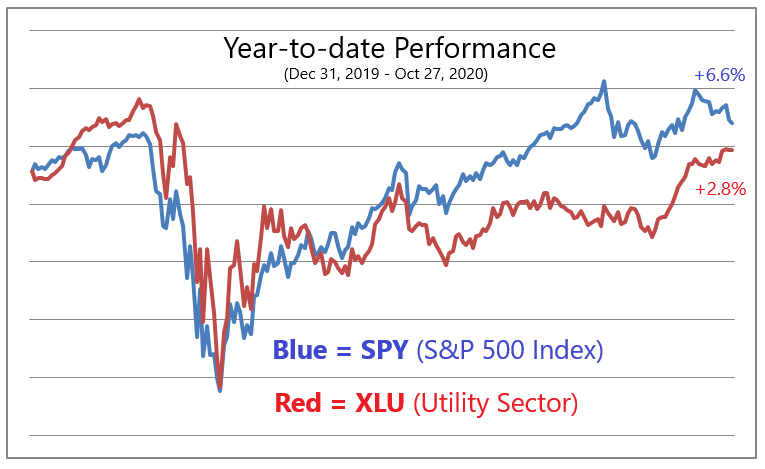 With less than two months to go in the year, my expectation is that XLU will end up outperforming SPY for all of 2020. The economy may soon feel the pinch as the daily case count of COVID-19 rises rapidly in Europe and the United States, forcing many businesses to once again shut down.

The one aspect of utility stocks that no other sector of the economy enjoys is the near-certainty of its dividend payments. Especially when it comes to regulated utilities, which operate in a monopolistic environment.

For that reason, their rates are set by government regulators based on a variety of factors. One of those factors is the rate of return, which ensures that the utility has sufficient profits from which to pay dividends to its shareholders. [Editor’s Note: For our list of the best high-dividend utility stocks to buy now, click here.]

Until now, dividends haven’t counted for much in this market. Who cares if XLU pays a dividend twice as much as SPY so long as stock prices keep going up?

Until last week, it seemed no amount of bad news regarding the virus could stop the stock market from going up. As the daily case count dropped over the warm summer months, most stocks soared higher.

Read This Story: When Bullish Spin Collides with Pandemic Reality

That did not make sense to me since the medical community was nearly unanimous in its belief that COVID-19 would regain strength as the weather cooled in the fall. You don’t buy stocks for the next month or two unless you are engaging in speculation.

Apparently, that is what a lot of people have been doing for the past six months. Online broker E-Trade reported a 267% increase in “daily active revenue trades” during the second quarter of this year.

All of the other major online brokers have reported similar trends. It seems that a lot of people are filling their forced time at home by day trading the stock market.

That can be quite profitable while everyone is still on the bandwagon. But it can prove costly when a lot of the passengers decide it times to jump off.

My guess is very little of the new retail money that came into the stock market this year has gone into utility stocks. Most of it has probably gone into trendy momentum stocks such as Netflix (NSDQ: NFLX) and Apple (NSDQ: AAPL).

If so, then we may be witnessing the reversal of the retail stampede that drove the market higher earlier this year. Since peaking above $572 three weeks ago, NFLX has fallen 15%.

Over the same span, AAPL is down 7% while Tesla (NSDQ: TSLA) and Amazon.com (NSDQ: AMZN) have lost 5% and 6%, respectively. The herd appears to be thinning out.

Leader of the Pack

Meanwhile, XLU gained 1% while all those tech stocks were falling. I expect that trend to continue through the remainder of the year.

I would not be surprised if utilities end up being the best performing sector during the fourth quarter of this year. It already has a head start. The utility sector outperformed all of the other S&P 500 sectors during the first four weeks of October.

In fact, it wasn’t even close. Utilities gained 8.9% while the next-best performing sector, communication services, was up 2.9%. Information technology stocks fell 0.3%, less than the average return of +0.8% for the index. 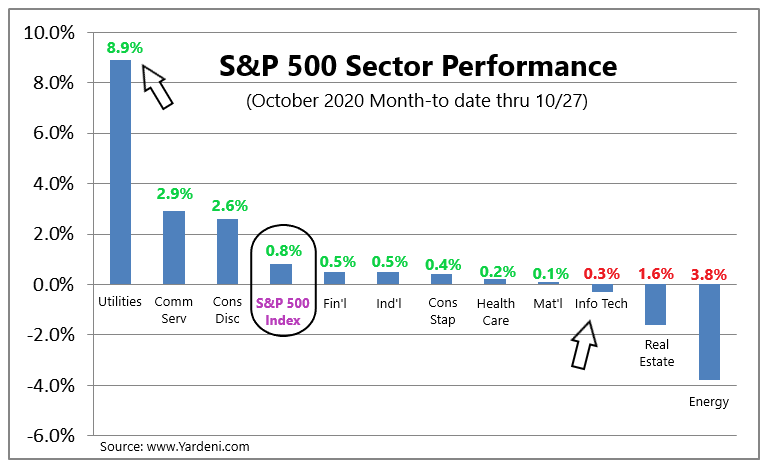 If nothing else, the chart above should make clear the challenge for index investors until the coronavirus pandemic has been fully contained. This is no time to take a passive approach to managing your financial assets. In this type of market, an active approach using a proven methodology that has delivered solid results in any environment is the way to go.

That brings me to my colleague, Jim Fink.

Jim is adept at putting volatility to profitable use. He knows better than anyone that for options traders, volatility generates greater opportunities for higher risk/higher reward trading.

In his capacity as chief investment strategist of Jim Fink’s Inner Circle, Jim has come up with a pre-election trade that’s positioned to reap a windfall. Make this one trade before election night, and you’re 95.96% likely to win. Do you like the sound of those odds? Get the details of Jim’s trade by clicking here.