The political polling profession got a lot wrong this election cycle, but the prognosticators were right about one trend: Americans increasingly favor the legalization of marijuana.

On election day November 3, we didn’t get the expected “blue wave.” Instead, we got a green wave.

See the following chart, compiled by New Frontier, that updates the status of marijuana laws throughout the nation as of the November 3 election results: 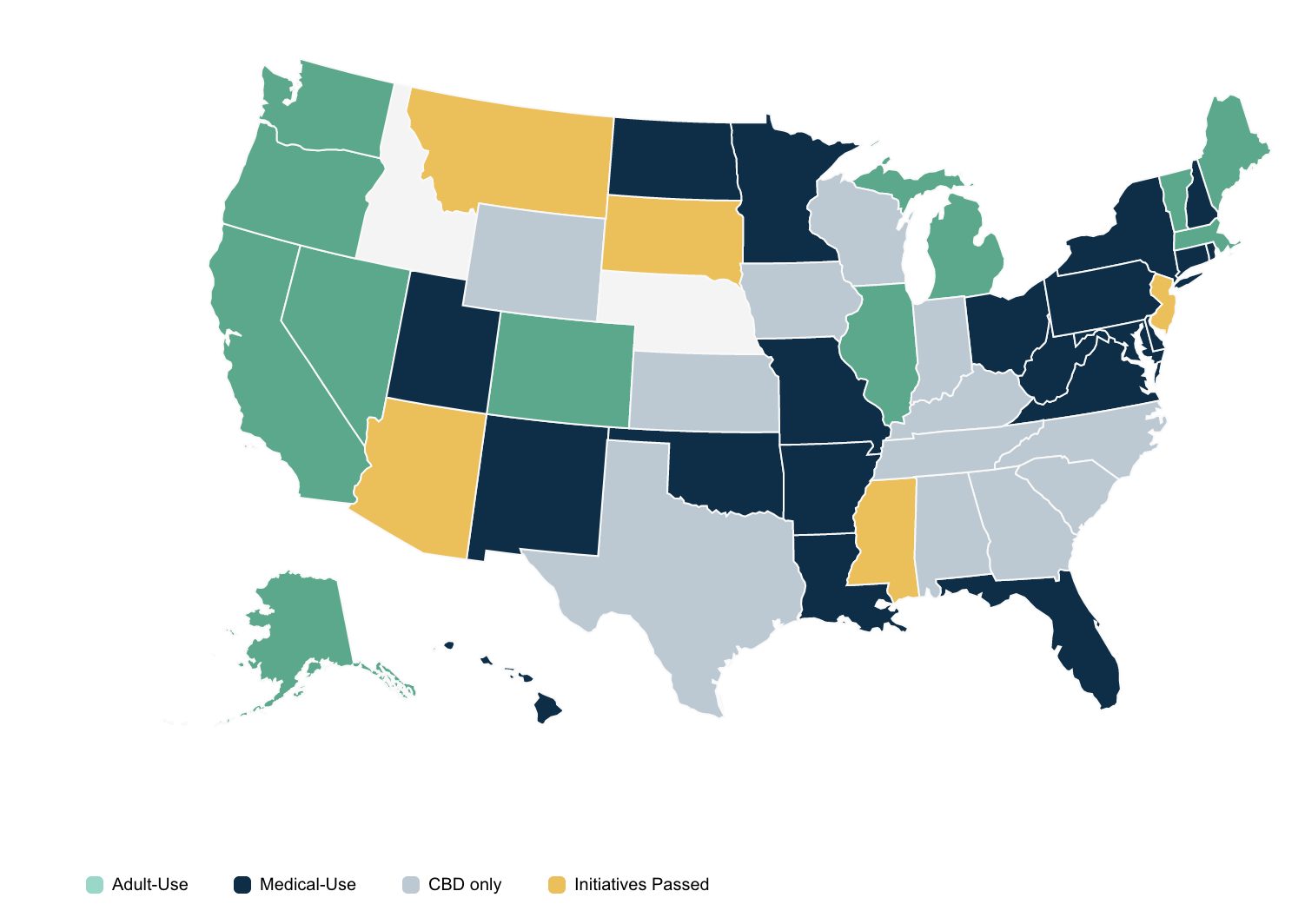 Marijuana has gone from social pariah to political sure-bet. In recent years, pot has made huge strides in public esteem. According to a recent Gallup poll, at least seven in 10 U.S. adults say smoking marijuana is an acceptable moral behavior.

The votes are still being counted for the Trump-Biden presidential race, as well as for several Senate races. But for Mary Jane, the tallies weren’t even close.

Arizonans passed their ballot measure 60% to 40% and New Jerseyans 67% to 33% on the marijuana initiatives in those states. Montanans approved a recreational marijuana measure 57% to 43% and an amendment to the state constitution to designate 21 years old as the minimum age for legal marijuana purchase, possession and use, by a margin of 58% to 42%.

In South Dakota, voters amended their state constitution to allow legal recreational marijuana use 53% to 47% and approved a medical marijuana ballot initiative 69% to 31%.

It’s worth noting that the COVID-19 outbreak is fueling pot consumption, helping marijuana stocks bounce back from their brutal correction in late 2019. Marijuana companies are reporting record sales and profits, a far cry from their generally dismal operating results of last year.

Trippin’ at the ballot box…

Initiatives pertaining to “magic mushrooms” also got the nod on November 3.

Magic mushrooms are wild or cultivated mushrooms that contain psilocybin, a naturally occurring psychoactive and hallucinogenic compound. An increasing body of research is showing that these mushrooms confer medical and psychological benefits.

When it comes to “tripping” on psychedelics, we’re witnessing an astonishing political sea change. Nowadays, a lot of mainstream consumers can claim psychedelic experiences. From soccer moms to corporate executives, the growing trend is to imbibe psychedelics for greater well-being. Micro-dosing ‘shrooms has become a consumer fad.

Accordingly, voters on November 3 in Oregon and the District of Columbia approved ballot initiatives to decriminalize the consumption of magic mushrooms, by margins of 56% to 44% and 76% to 24%, respectively.

Editor’s Note: As the above voter initiatives show, the commercialization of marijuana enjoys powerful momentum. New laws that lift pot restrictions result in new customers for the purveyors of weed.

The marijuana industry is getting financially strong, at the same time that the political environment is becoming more favorable. These trends are setting the table for another upward surge in marijuana stocks. The “green wave” isn’t over. It’s still gathering momentum.

After months of diligent research, we’ve found cannabis investments with the greatest upside potential. Click here for our report on the best pot stocks.