The One Sure Bet in the November Election

If last week’s election proved nothing else, politically we are a deeply divided country. But when it comes to gambling, most Americans are in agreement. We want more of it, and now!

Want proof? In Louisiana, a proposal to legalize sports gambling won by a large majority in Baton, Rouge, New Orleans, Lafayette. A similar result was achieved in South Dakota, which is not exactly a sports mecca.

Already, 18 states and the District of Columbia allow betting on sports. Some of them allow bets to be placed over smartphones, while others require that they be made in a casino or other physical location. The Louisiana ballot did not address that question, so that will have to be hammered out before gambling can commence.

Either way, sports betting activity is likely to skyrocket next year. That is, if a second wave of COVID-19 does not wreak havoc with the professional sports leagues as it did this year.

Of course, it is the casinos and online betting purveyors that stand to benefit the most. No matter which team wins or loses they will earn their “vigorish,” (aka, the vig), which is their cut of the winning gamblers’ payouts.

As an investor, you can also get a piece of the action. As you might expect, Wall Street can’t let an opportunity like this go by without finding a way to get in on the deal.

Five months ago, I noted the quick success of online gambling company DraftKings (NSDQ: DKNG) after it began trading publicly in April. I opined that after rising 300% in just 10 weeks, DKNG would soon take a dive.

Over the next four weeks, DKNG fell more than 30%. Investors fretted that there may not be much in the way of sports to bet on in the autumn if COVID-19 was not brought under control.

Since then, the coronavirus pandemic has gotten worse, not better. But that hasn’t stopped the major professional sports leagues from staging games. As a result, DKNG reversed direction and more than doubled in value by early October.

A similar pattern emerged for DraftKings’ primary competitor, Penn National Gaming (NSDQ: PENN). It also doubled in value from early July through late September. Both stocks shot up about 20% last week when the gambling initiatives were passed. 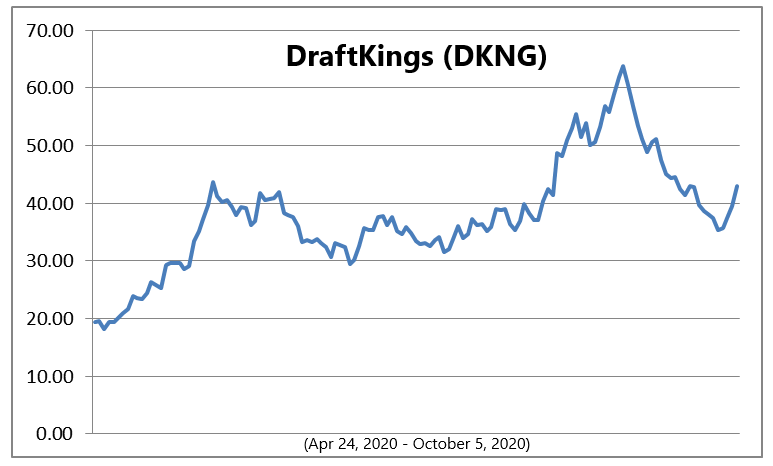 That type of “boom or bust” behavior is too volatile for my tastes. Even after last week’s rally, DKNG is still down more than 30% from where it was just one month prior. PENN is doing better than that but is more than 10% below its September high.

In one respect, the online gambling business is similar to the legal marijuana industry. At the moment, they both consist of small players jockeying for position. Eventually, a few will emerge as industry giants while most of the others will either be acquired or go out of business.

I don’t like those odds. There are too many variables that will determine the fates of these companies that are impossible to quantify. For my money, I’d rather make a bet on the entire sector if I believe that it will grow at a fast pace.

The good news is, there is an exchange-traded fund (ETF) specifically for the online gambling sector. The Roundhill Sports Betting & iGaming ETF (BETZ) owns shares of DraftKings and Penn National along with 39 other companies.

Those 41 stocks are spread across 14 countries including the United States (comprising 34.5% of the portfolio’s assets), Britain (14.8%), and Australia (12.2%). As you might infer from that list, betting on soccer and rugby is big business overseas.

The global online gambling market is expected to reach 95% billion by 2023 compared to $60 billion last year. Approximately 20% of the revenue will come from bets placed in the U.S.

I think the online gambling market could grow faster than that. This year, millions of Americans opened brokerage accounts to day trade the stock market while stuck at home due to the coronavirus pandemic. Thus far, they have been rewarded by a rising stock market.

Sooner or later, the stock market will cool off. When that happens, many of those novice “investors” may be looking for an alternative to the whims of Wall Street to satisfy their desire to get rich quick.

Unlike gambling, online stock market trading is legal everywhere in the U.S. However, one industry analyst estimates that 96% of the U.S. population will be able to legally gamble online by 2025. Several states have indicated that they are considering adding a gambling referendum to their ballots in 2022 or 2024.

I’ve just discussed the investment opportunities within online gaming. However, if you really want to put the odds in your favor, consider increasing your portfolio’s exposure to gold. The “yellow metal” is a classic hedge for the sort of uncertainty we’re seeing now.

My colleague Dr. Stephen Leeb has pinpointed an under-the-radar gold miner that shines above the rest. This small-cap “rocket stock” is poised to blast off, but most of Wall Street hasn’t even noticed the company.

Dr. Leeb is chief investment strategist of the premium trading service, The Complete Investor. The time to invest in his gold mining play is now, before the rest of the investment herd catches on. Click here for details.