Video Update: The Financial Calm After The Election Storm

Here’s my video presentation for today. My article below provides details. I also steer you toward a prominent investment theme that’s gathering momentum.

This election cycle, members of the securities and investment industry contributed about $74 million to support Democrat Joe Biden’s candidacy for president, a vastly larger sum than what President Donald Trump raised from Wall Street, according to the latest data from the nonpartisan Center for Responsive Politics. Republican Trump only received about $18 million from Wall Street. Many of Trump’s previous backers abandoned him this time around.

Maybe you find it counterintuitive, but the stock market is perfectly happy that Trump lost to Biden. But not for ideological reasons. The financial community is pragmatic and politically agnostic. Sure, the majority of Wall Street’s campaign contributions went to Biden, but that’s because the financial community expected Biden to win and they like to bet on the winning horse.

Wall Street isn’t necessarily thrilled that it faces a Democratic administration. However, investors are sick of drama and uncertainty. Biden’s political career spans 36 years as a U.S. senator and eight as vice president. Biden is a safe, known quantity.

Don’t get distracted by the media circus about recounts and lawsuits. Cable news is looking for new controversies to fuel ratings. Trump’s attempts to contest the election are doomed. Biden will be sworn in as our 46th president.

Biden is a moderate and long-time member of the establishment. He won’t be eager to break up the banks or soak the rich, as his progressive opponents promised to do during the primaries. Wall Street also is pleased that we’ll probably get divided government, with the Democrats in control of the White House and U.S. House of Representatives and the Republicans (probably) in charge of the Senate.

Control of the Senate will be decided by a double run-off in Georgia in January. However, even if the Democrats beat the odds and somehow wrest control of the Senate next year, the balance of power in the chamber will be razor-thin with a GOP dominated by conservatives and a filibuster rule that requires 60 votes to get anything done.

We’re probably on course for bipartisan passage of a fiscal stimulus package in 2021, which would boost the economy and markets. Infrastructure-related companies in the construction and technology sectors would reap a windfall.

However, Wall Street also is confident that the Senate will serve as a brake on the left wing of Biden’s party, reducing the likelihood of tax increases, new regulation, anti-trust measures, and other “anti-business” moves. Icing on the cake for investors is a likely end to the destructive U.S.-China trade war.

The upshot: Factors are in place for political equilibrium, a backdrop that the markets prefer. Fear of chaos is waning. 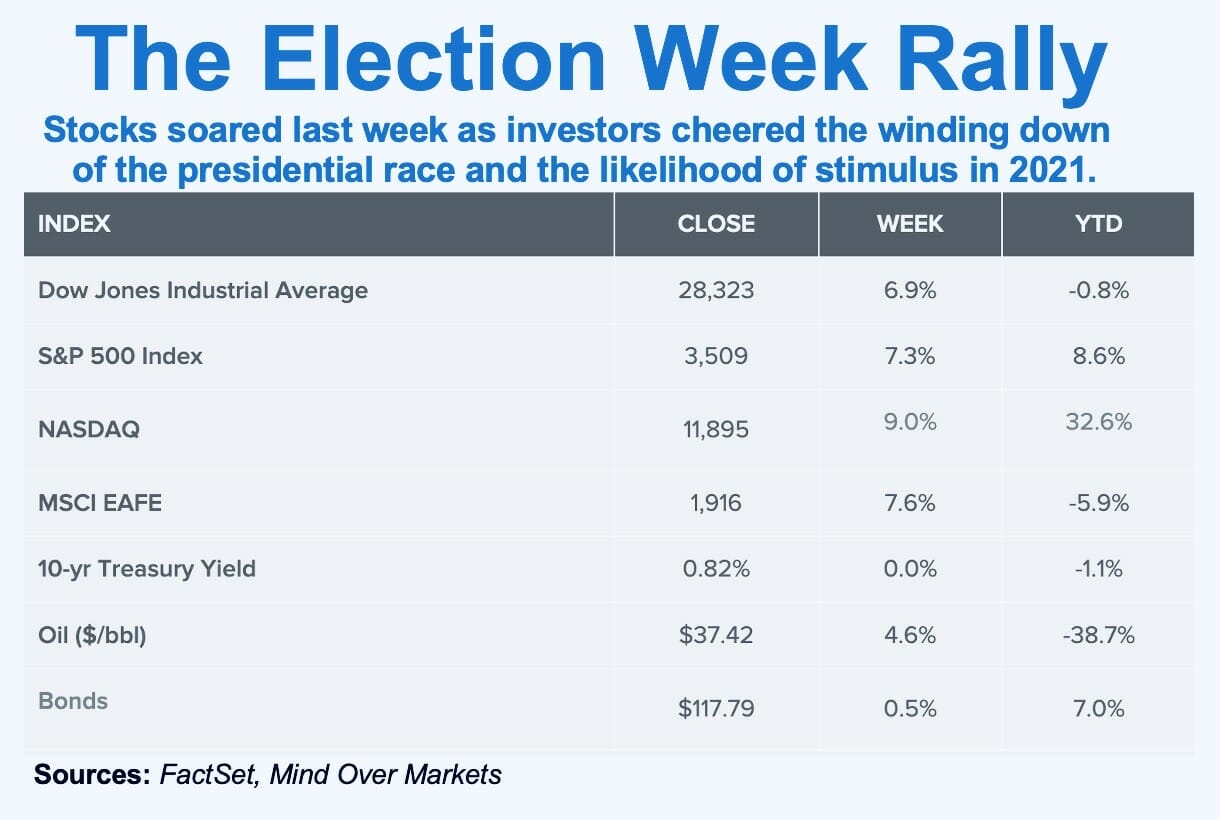 As of this writing Monday morning, the three main U.S. stock market indices were sharply higher in pre-market futures trading. The Dow Jones Industrial Average was poised to open about 400 points in the green.

Conditions are increasingly favorable for a thriving stock market. The U.S. Labor Department reported Friday that total nonfarm payroll employment rose by 638,000 in October, and the unemployment rate declined to 6.9%. The number of unemployed persons fell by 1.5 million to 11.1 million.

October’s job gains largely occurred in the leisure and hospitality, professional and business services, retail trade, and construction industries, which have benefited from loosening quarantine strictures.

As the coronavirus pandemic worsens, these industries could go back into lockdown and job losses could increase again. But for now, investors are content with the numbers.

Meanwhile, corporate earnings for the S&P 500 are coming in considerably better than expected, according to research firm FactSet. To date, a record 86% of companies have exceeded earnings estimates (see the chart): 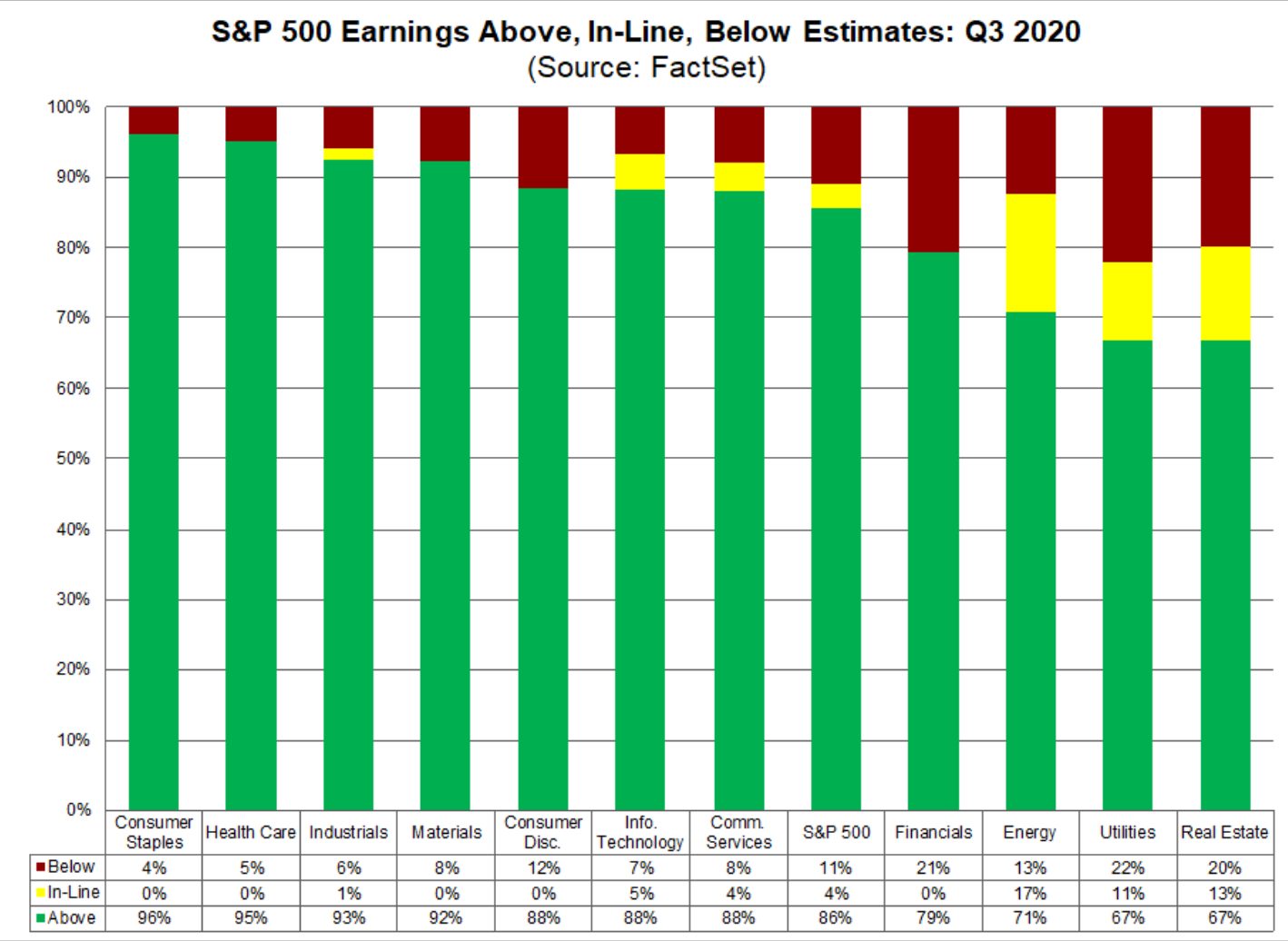 One of the most bitter U.S. presidential elections is over and the alarmists were proven wrong. We didn’t get violence in the streets. We didn’t get a civil war. Russian interference was barely evident. But we will get a peaceful transition of power and that matters a great deal to Wall Street, perhaps even more than who actually occupies the Oval Office.

In presidential elections since World War II, the stock market rose an average of 9.8% one year from the election. With political stability restored and an economy on the mend, I expect the emergence of a prolonged bull market next year. The wild card, of course, is the coronavirus. Containing the virus will be President Biden’s first and biggest challenge. As an investor you should remain optimistic, but on your guard.

We didn’t get a “blue wave” last week, but we certainly got a green one. On November 3, ballot measures in Arizona, Montana, New Jersey and South Dakota to legalize recreational marijuana all passed. South Dakotans also approved a separate measure permitting medical marijuana use, as did Mississippi voters. 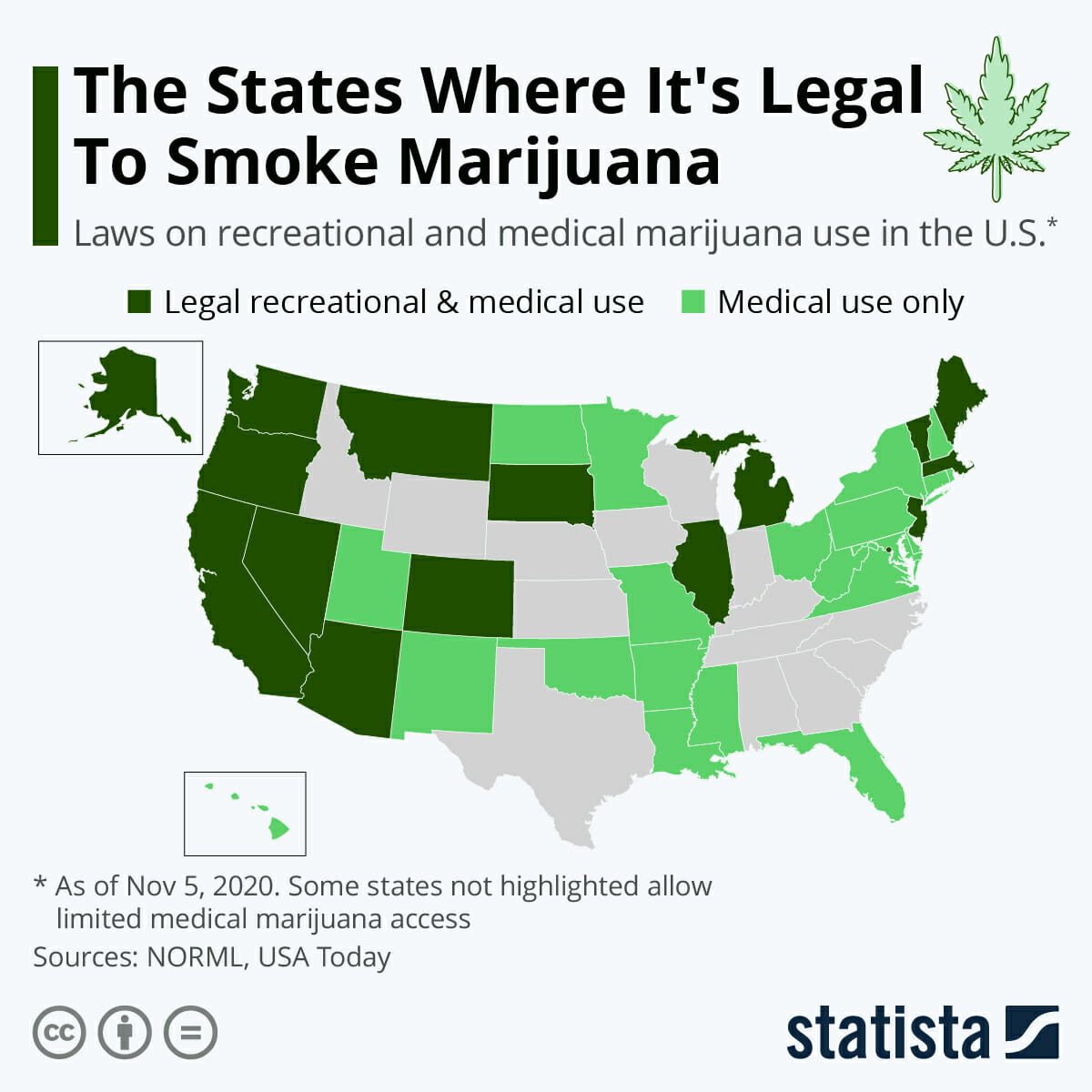 As the map shows, the legalization of medical and recreational marijuana enjoys powerful momentum on the state level. In 2021, Congress is likely to enact laws on the federal level that benefit the cannabis sector.

New laws that lift pot restrictions result in new customers and sales for cannabusinesses and in turn greater profits for investors.

The marijuana industry is gaining financial strength, at the same time that the political environment is becoming more favorable. In recent weeks, marijuana stocks have been soaring and I expect the upward momentum to continue.

After months of diligent research, our experts have found cannabis investments with the greatest upside potential. Click here for our report on the best pot stocks.