Last weekend, shortly after the 2020 presidential election was officially clinched by Joe Biden, a former colleague from my days on Capitol Hill called me to predict that Biden would nominate Elizabeth Warren, the progressive Democratic U.S. Senator from Massachusetts, as Treasury Secretary.

I laughed derisively and bet my friend a bottle of Glenfiddich single malt Scotch whisky that he was dead wrong. We’ll eventually know if I have to pony up.

You see, despite policy differences in other areas, Republicans and Democrats are generally friendly to the business and financial communities. Warren is a knowledgeable and accomplished lawmaker, but she’s also a Wall Street gadfly. Typically after a presidential election, wealthy donors to the winning party (not reformers) are nominated to key positions of power.

I’ve been flooded lately with reader queries on one basic topic: What will a Joe Biden administration mean for investors?

As “Deep Throat” said in the 1976 movie All The President’s Men: “Follow the money.” This election cycle, members of the securities and investment industry contributed about $74 million to support Democrat Joe Biden’s candidacy for president and only about $18 million to Republican Donald Trump. I expect the centrist Biden to nominate Wall Street veterans to his economic team. So does Wall Street.

Stocks soared Monday to all-time highs, as investors embraced the prospects of a Biden administration and apparent progress on a coronavirus vaccine.

In pre-market futures trading Tuesday morning, U.S stock futures were mixed but the Dow was set to open more than 200 points higher.

Former Federal Reserve chair Alan Greenspan coined an infamous phrase: “irrational exuberance,” which he uttered in a televised address on December 1996 to describe the surging stock market of the late 1990s. He was especially referring to the dot-com bubble, fueled by the rise of the fledgling Internet.

Greenspan turned out to be right. The NASDAQ Composite peaked in value in March 2000 then blew up and crashed to the ground like the Hindenburg. The long subsequent decline in stocks lasted from March 2000 to October 2002, during which time $6.2 trillion in household wealth was wiped out.

Since the pandemic lows of late March 2020, we’ve been witnessing a new bout of exuberance (with dips along the way). This time around, is the bullish sentiment…rational? As I explain below, there are ample reasons to be highly confident in the rally, but with a few caveats.

Pfizer (NYSE: PFE) said Monday that its coronavirus vaccine developed with BioNTech SE prevented 90% of infections in a trial with tens of thousands of volunteers. Pfizer said it could ask the Food and Drug Administration (FDA) by the end of November for emergency authorization of the vaccine.

The vaccine has not been developed in conjunction with the Trump administration. Despite the president’s claims, the vaccine has nothing to do with Operation Warp Speed. It’s also worth noting that ultimate distribution could take many months.

Regardless, there’s an inconvenient truth that Wall Street and the media are ignoring: millions of Americans simply won’t take the vaccine, even if it were free and approved by the FDA (see the following chart): 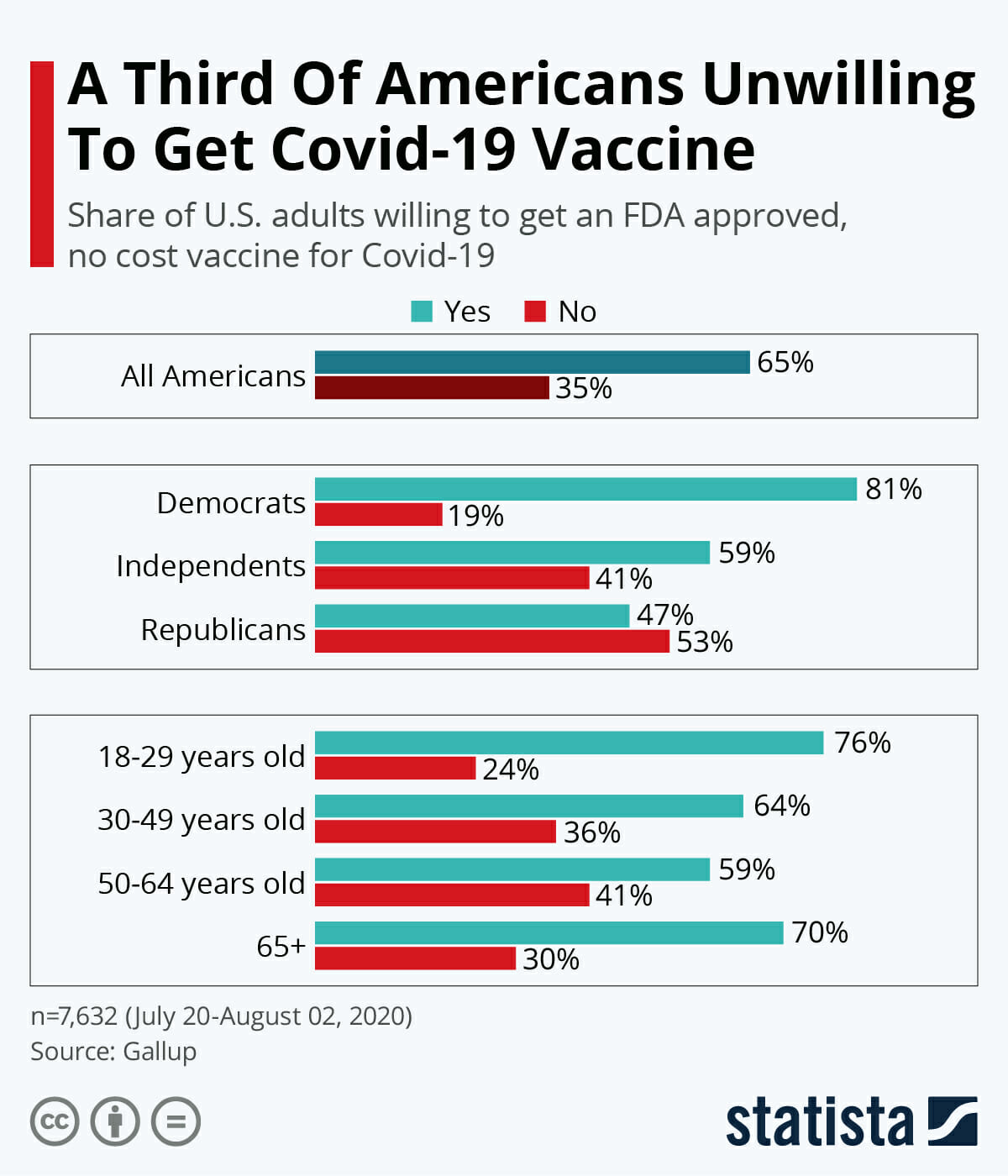 Meanwhile, the coronavirus pandemic is worsening. On Sunday, the U.S. became the first nation worldwide since the pandemic began to surpass 10 million COVID-19 infections. As of this writing Tuesday, our country is home to 10.1 million infections and the case rate is surging exponentially, according to data from Johns Hopkins.

But for now, a prospective vaccine is offsetting fears about the resurgent pandemic. The stock market also is happy that the raucous 2020 presidential election is finally over. Investors have concluded that Trump’s challenges to the results will come to naught.

Also cheering investors is the prospect of massive fiscal stimulus to combat economic damage from the pandemic. This week, Senate Majority Leader Mitch McConnell (R-KY) surprised Washington by taking the lead in stimulus negotiations. The lame duck Trump administration is sitting out the stimulus talks, but President-Elect Joe Biden’s transition team is getting involved. From his many years in the Senate, Biden is a skilled deal-maker.

McConnell has even signaled that he’s willing to compromise on key Democratic demands, notably increased federal assistance to struggling states and localities. McConnell and the GOP had previously balked at this assistance. However, budget-strapped governments already are laying off public workers in droves. A serious risk to the economy has been the inability of the White House and Congress to reach an agreement on another coronavirus rescue package. It appears that the logjam is about to be broken.

A major component of stimulus is likely to include infrastructure spending, which would be a shot in the arm for publicly traded stocks in the beleaguered construction sector. As the economy picks up steam in 2021, the oil and gas sector should also bounce back. Biden can be expected to encourage the trend toward renewable energy, but it’s wrong to assume that he’ll be an enemy of fossil fuels.

Read This Story: What A Biden Presidency Means For The Oil Industry

So yes, optimism is called for. But don’t chase the rally. Pick your spots. The markets have come roaring back, but the coronavirus is far from contained and a vaccine from Pfizer isn’t a magic wand. Further volatility and economic danger lay ahead.

If you’re looking for a steady source of income that’s immune to the pandemic and economic ups and downs, turn to my colleague Amber Hestla.