The average citizen of “Fortress America” doesn’t give much thought to other countries. Surrounded by huge oceans and living in a new republic that fought to separate from the Old World, we tend to be a parochial people. In his farewell address of 1796, President George Washington warned “against the insidious wiles of foreign influence.”

Network producers in this country realize that foreign news is bad for ratings, so they give the rest of the planet short shrift on newscasts. If you don’t believe me, watch the major networks tonight and see for yourself. You’ll barely see coverage of other countries, unless they’re briefly caricatured as villains.

But as an investor, if you ignore international stocks, you’re leaving a lot of money on the table.

After struggling due to the coronavirus pandemic, global equity benchmarks are springing to life in tandem with U.S. indices. Below, I’ll explain why your portfolio should be globally diversified, for growth as well as a hedge. I’ll also highlight salient investment themes and opportunities.

Favorable conditions are in place to boost investment gains in nearly all regions of the world. The International Monetary Fund (IMF) projects that global growth in full year 2021 will reach 5.4% on a year-over-year basis, as factories and consumer consumption get back up to speed.

Central bankers throughout Europe and Asia are keeping the monetary spigots open and U.S. political uncertainty is winding down. Global investors also look forward to an end of the ruinous trade war.

President-Elect Joe Biden belongs to the internationalist school of diplomacy and trade. Biden might not immediately rescind Trump-era tariffs, but he certainly won’t impose new ones. The U.S. is set to abandon “America First” and rejoin the world community, a plus for economic and investment growth.

Much is contingent, of course, on the unpredictable course of the coronavirus pandemic. But the emergence this week of a promising COVID-19 vaccine is a game-changer.

In October, international stocks attracted net inflows totaling $8.6 billion. The benchmark Vanguard Total International Stock ETF (VXUS) led that segment among exchange-traded funds, with inflows of $2.6 billion. The VXUS is up 7.3% over the past three months, compared to 5.8% for the S&P 500 index (as of market close November 10).

In pre-market futures trading Wednesday, all three U.S. indices were sharply higher as post-election optimism continued. European and Asian benchmarks on Wednesday were maintaining their upward momentum as well.

The global boom in construction…

The repair of crumbling infrastructure in developed countries and a surge of new building in developing economies will mean rapid annual growth in infrastructure investment for years to come. Publicly traded construction companies with global footprints should prosper in 2021 and beyond. I expect commodities prices to soar, as demand outstrips supply for copper, iron ore, zinc, silver, and other key materials.

If you’re looking for a specific region that’s positioned to take off economically in 2021, consider Asia, especially China. Due to stricter management of the pandemic, coronavirus deaths per million people are vastly lower in that part of the world than in the West. China’s ambitious “Belt and Road Initiative” extends through 60 partner countries, with infrastructure projects of a massive scope.

Easy money will grease the skids. The U.S. Federal Reserve and its counterparts in Europe and Asia have pulled out all the stops on monetary stimulus. Stimulus overseas will likely drive European and Asian corporate earnings and stock prices higher.

And let’s not forget Latin America. Emerging markets with increasing ranks of middle class consumers should thrive under a Biden presidency, as protectionist measures are put on the shelf. Mexico and other major Latin economies are expected to gain traction in 2021. Although under pressure now, Latin America is poised for a pronounced rebound (see chart). 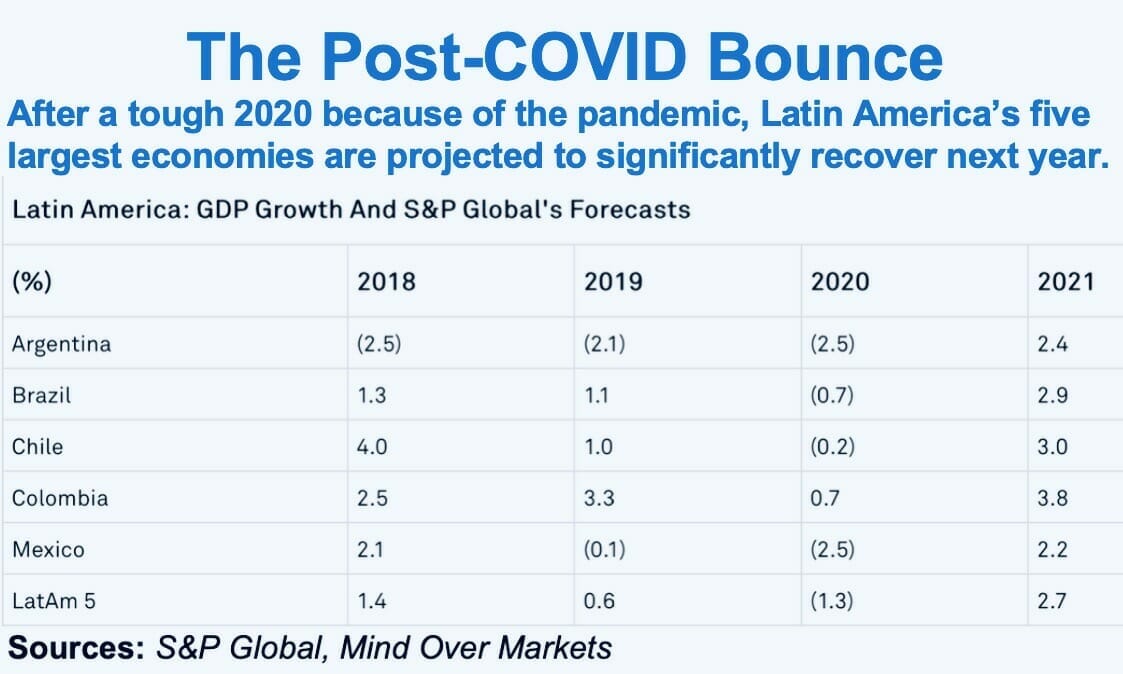 Latin America enjoys favorable demographic trends that will make its countries solid long-term bets once the virus has left the stage.

Economic tailwinds for Latin America include population growth, rising education levels, increasing technological savvy, and the expansion of a free-spending consumer class that skews toward a younger demographic.

Major improvements in the region have been made in terms of life expectancy, infant mortality and other key metrics that reflect quality of life. These advantages apply to other emerging markets such as Africa, but Latin America occupies the vanguard.

During the month of October, analysts boosted earnings per share (EPS) estimates for S&P 500 companies for the fourth quarter, according to research firm FactSet. The Q4 bottom-up EPS estimate rose 1.8% (to $36.72 from $36.08) during this period. “Bottom up” is an aggregation of the median EPS estimates for Q4 for all the companies in the index

Typically during the first month of a quarter, analysts lower EPS estimates, but that wasn’t the case for Q4 2020 (see chart). 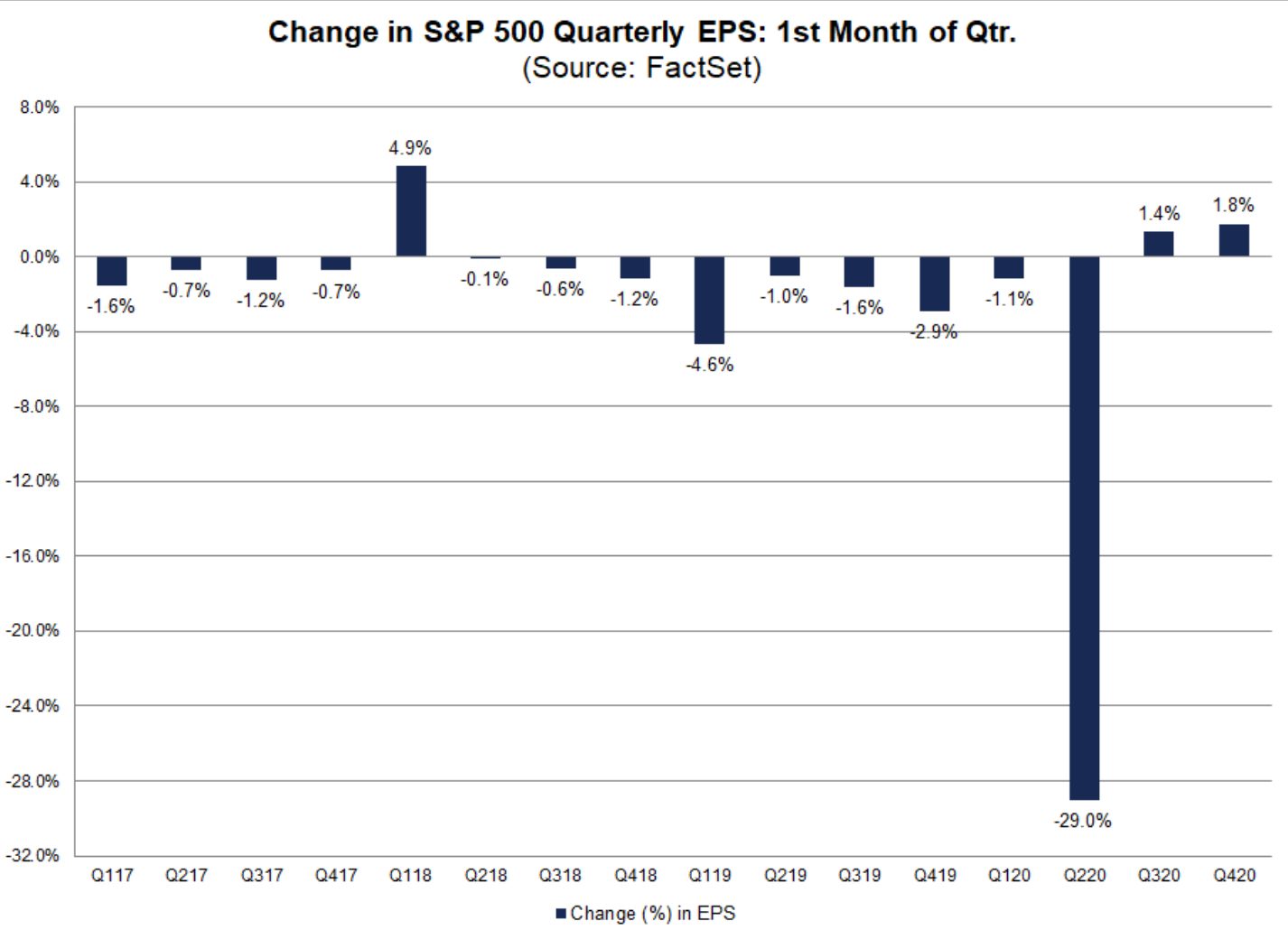 Here at home, traders are cheering the end of the U.S. election, as well as the end of gridlock in Washington.

The U.S. economy is starting to mend and new fiscal stimulus legislation is on the horizon. After months of stalled negotiations this year, Congress is getting ready to pass a new coronavirus relief bill in 2021.

The upshot: factors are in place for a global bull market next year. The U.S. will enjoy renewed growth in 2021, but so will the rest of the world. Now’s the time to increase your exposure to quality foreign equities in the sectors that I’ve just mentioned.

Profit from this loophole…

If you’re looking for a specific and steady source of income that’s immune to the pandemic and economic ups and downs, turn to my colleague Amber Hestla.