The coronavirus giveth, and the coronavirus taketh away. That may be the new credo for shareholders of biotech drugmaker Novavax (NSDQ: NVAX). In a moment, I’ll explain how the latest chapter in this company’s unusual story can giveth to you.

I first wrote about Novavax six months ago when its share price soared following the outbreak of the coronavirus pandemic. The company received a large grant to accelerate the development of its vaccine candidate for COVID-19.

I said then that I believed the stock would move strongly one way or the other in the months to come. I reasoned that if Novavax was the first to develop a successful vaccine, its share price could soar much higher. But if it failed, it could fall back to where it was trading before the pandemic began.

I was right. By mid-July, NVAX was trading above $140. If you took my advice in May, you could have made more than 800% on the call option trade I recommended then.

At that time, I felt NVAX had become overvalued based on speculative trading. The company’s vaccine candidate was still in trial with a result expected in the fall. For that reason, I recommended buying a put option that would gain value if NVAX dropped in value.

Until recently, that trade was not looking too good. By August, NVAX had climbed to $180. But just as suddenly, it reversed direction and plummeted below $100 within a month. Now that trade is back in play. 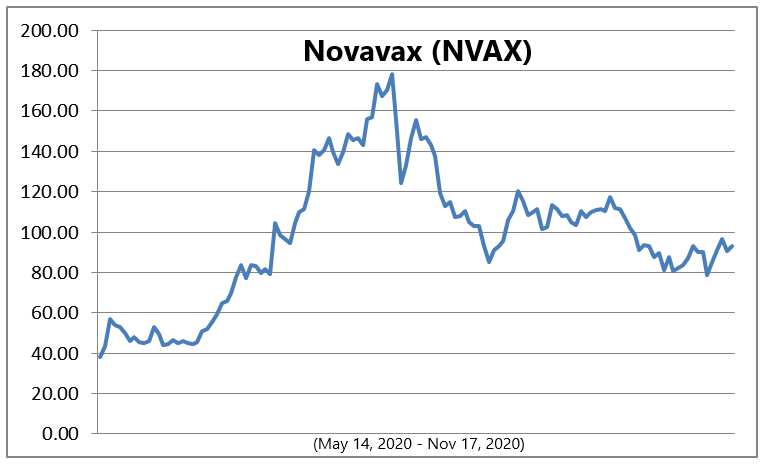 Falling Behind in the Race

Suddenly, Novavax was on the outside looking in. It has not yet completed the stage 3 trial for its vaccine candidate. If the result is anything other than outstanding, NVAX could have farther to fall.

To be clear, Novavax has not failed. Last week, its vaccine candidate was granted fast track status by the U.S Food and Drug Administration (FDA). If all goes well, Novavax may announce a successful vaccine of its own within the next 90 days.

That’s the good news. The bad news is that by then, Moderna and Pfizer may already be producing and distributing their vaccines in large quantities. Of course, there will be a need for many vaccines to satisfy global demand.

But what if the vaccine from Novavax proves to be less effective than the others? Suppose it is only 80% effective, which is still quite good but demonstrably less than the others? Would you take it, or would you wait for one of the other vaccines with a higher efficacy rate?

Further complicating matters is the political transition that will be taking place at about the same time Novavax may know if it has a winner. On January 20, Joe Biden will be sworn in as the next president barring a reversal of this month’s preliminary election results.

Will President-elect Biden’s Coronavirus Task Force follow the same path as President Trump’s committee? There is no reason to believe that it will not, but what we do know is that a different set of decision-makers will be in charge.

It’s a Marathon, Not a Sprint

For that reason, I believe this is a good time to sell a “naked put” option on NVAX. At the start of this week while NVAX was trading near $87, the put option at the $85 strike price that expires on January 15 could be sold for $14.

That money is yours to keep no matter which way NVAX goes. If it drops below $85 by expiration then you will have to buy it at that price. But since you collected a $14 option premium up front, your net cost basis is only $71.

If NVAX remains above $85 through expiration then the option contract expires and you are off the hook. You get to keep the $14 premium with no further obligation. That works out to a 16.5% yield on capital at risk over just eight weeks. On a straight-line basis, that equates to an annualized yield of roughly 100%.

The risk is that NVAX is put to you at $85 and falls below your $71 net price. At that point, you would have a loss on this trade. Even if that happens, I do not expect NVAX to be down for long. By all indications, its COVID-19 vaccine candidate will be successful.

There are 7.8 billion people in the world. To achieve herd immunity on a global scale, we will need billions of doses of vaccines. Novavax may not be the first to market but it won’t be the last, either.

Editor’s Note: Jim Pearce just showed you trading strategies to make market volatility work for you. Our colleague Amber Hestla has found another way to make money that’s immune to the market’s ups and downs.

Amber can show you how any U.S. citizen can pocket instant cash from a government “income insurance” program. It’s all thanks to an obscure loophole she has unearthed through months of painstaking research. Want to tap this pool of Uncle Sam’s money? Click here for details.