Get Ready for the Great Building Boom of 2021

As 2020 winds to a close, readers have been asking me: what do you see as the biggest investment theme for next year? My unequivocal answer: infrastructure spending.

The pounding of jackhammers, beeping of cranes, and revving of bulldozers will be the soundtrack of 2021. Massive stimulus in the form of infrastructure building is on the agenda around the world. This activity will fuel a secular bull market and reward investors who position their portfolios now. Below, I pinpoint a specific play on this trend.

Uncle Sam is getting ready to roll up his sleeves. Much-needed coronavirus relief spending is dead-on-arrival during the waning days of the Trump presidency, but President-elect Joe Biden and a new Congress will take up fiscal stimulus in the first quarter of 2021. An integral part of this stimulus will be infrastructure spending.

Donald Trump has long promised to boost infrastructure spending, going all the way back to the 2016 campaign. In that pivotal year, Trump, Hillary Clinton, Bernie Sanders, and other presidential contenders all talked a good game on infrastructure. Nothing happened, even during the four years of Trump’s tenure. We heard a lot of rhetoric from both political parties in Washington about infrastructure, but we got zilch in terms of tangible legislation.

Read This Story: Your Congress…Inaction

That’s all about to change. Biden vows to spend trillions on infrastructure. When the former Democratic Senator and Vice President moves into the Oval Office on January 20, he’ll have the ideological inclination, political clout, and deal-making skills to pull it off, even if Republicans hold onto the Senate after Georgia’s double run-off in January.

This expectation is one of the favorable factors driving the post-election rally in stocks, albeit with dips along the way depending on the pandemic headlines. On Wednesday, the Dow Jones Industrial Average fell 344.93 points (-1.16%), the S&P 500 slipped 41.74 points (-1.16%), and the tech-heavy NASDAQ shed 97.74 points (-0.82%). The pullback was to be expected, after stocks hit new record highs earlier this week.

In pre-market futures trading Thursday, the three main indices were set to open lower. Weighing on stocks is the possibility that the White House and Congress might fail to reach a budget agreement, triggering a federal government shutdown next month. The latest COVID surge also is spawning renewed fears of economic damage.

Regardless of the pandemic and the chaotic denouement to the Trump presidency, America’s need to upgrade its crumbling infrastructure is real and requires urgent attention. The to-do list encompasses rickety railroads, collapsing bridges, exploding tanker cars, corroding sewer systems, leaking pipelines, and pockmarked highways. The following chart depicts the magnitude of the task: 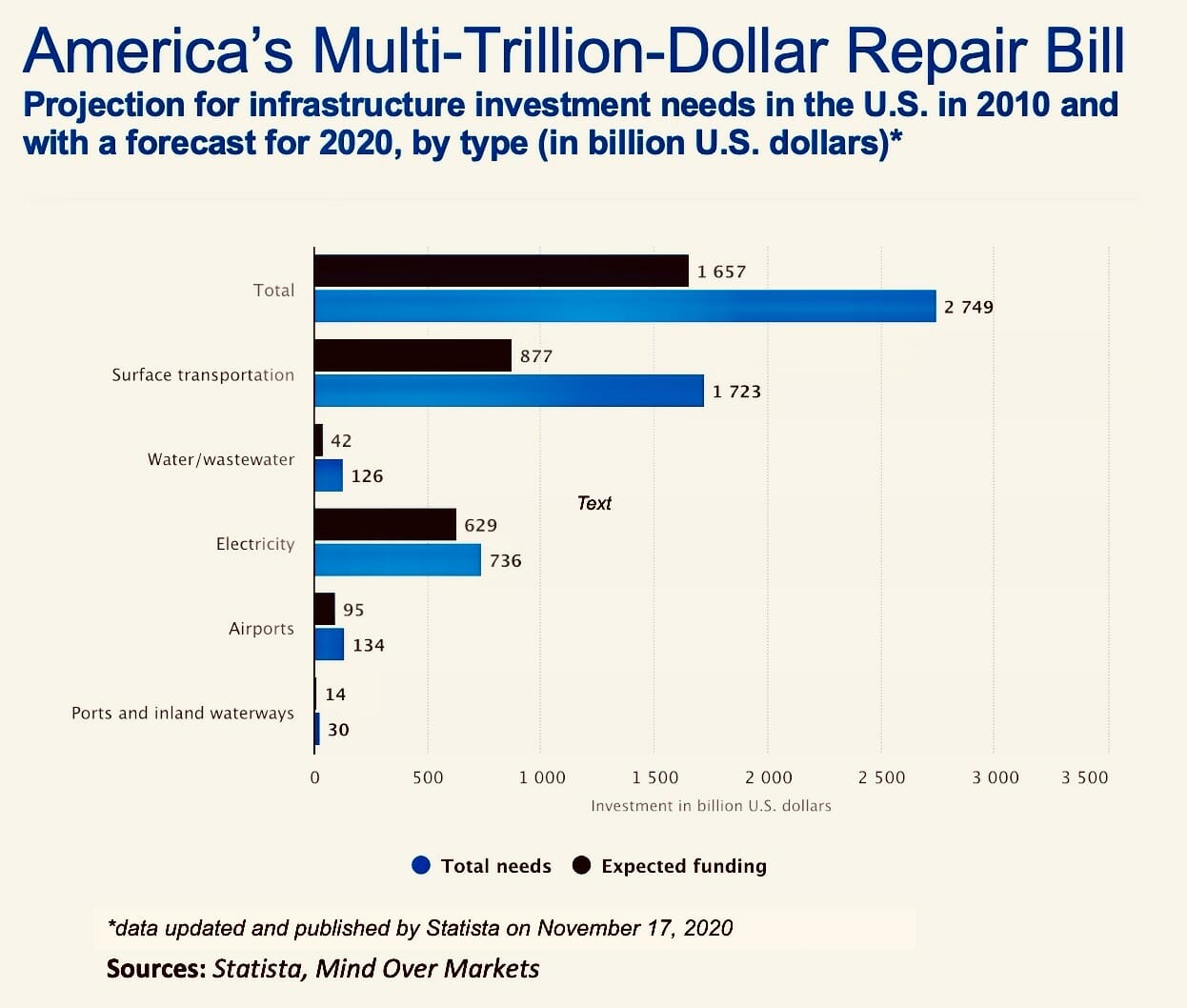 In a recent study, the Global Infrastructure Hub (GIH), a research organization backed by the G20, reported that $97 trillion is required in global infrastructure investment by 2040. The study also found an $18 trillion shortfall between current investment projections and the spending that’s needed.

Among the 50 nations studied in the GIH report, the U.S. has the biggest estimated shortfall at $3.8 trillion. That’s the staggering price tag to get America’s bridges, roads, mass transit, sewer systems, ports, inland waterways, and other infrastructure up to standard. The non-partisan group Building America’s Future reports that one third of America’s major roads are in poor or mediocre condition and 45% of major urban highways are congested.

A recent analysis from the American Road & Transportation Builders Association has found that over 47,000 bridges in the U.S. are falling apart because they’re “structurally deficient.”

Placed end-to-end, these unreliable and dangerous bridges would stretch nearly 1,100 miles, from Chicago to Houston. The total repair bill would be $171 billion. U.S. drivers on average cross those bridges 178 million times a day. At the current rate, it would take 80 years to fix all 4,675 of these bridges.

In develop and developing countries alike, public works projects are on drawing boards to address deferred building needs as well as to counteract economic damage from the pandemic. In particular, China’s multi-trillion-dollar Belt and Road Initiative, designed to link China with more than 100 countries through railroad, shipping and energy projects, will provide a long-term windfall for contractors.

Now’s the time to increase your exposure to publicly traded, infrastructure-related construction firms, ahead of the investment herd. Blue-chip companies with global footprints and an entrenched government client base are your best bets.

But it’s not just public sector construction spending. As economic growth picks up steam in 2021, the U.S. housing shortage will drive demand for home building materials.

Experts at a recent home building industry summit predicted that about $400 billion will be spent on building materials in the U.S. next year, for total year-over-year growth of about 10%. We’ll witness a big shift toward single-family home construction spending. In the first year of a Biden presidency, housing sector stocks should outperform.

Copper is poised to shine…

A generally overlooked way to profit from the building boom is copper. The experts at Investing Daily predict that the price of copper will soar in 2021 and beyond, which is great news for the best-situated copper producers.

Copper is a crucial commodity. The industrial world can’t function without the “red metal.” The practical uses of copper are all around you. Copper is vital for building construction, power generation and transmission, electronics, industrial machinery, and transportation vehicles. Copper wiring and plumbing are mainstays of heating and cooling systems, appliances, and telecommunications links.

As the world economy resumes growth and infrastructure spending explodes, so will demand for copper. For our favorite investment play on copper, click here now.