Talk about getting soaked! Last Tuesday, cruise ship operator Carnival Corp. (NYSE: CCL) offered to swap 57.4 million shares of its common stock to holders of its convertible notes. The exchange was done at a share price of $18.05.

The noteholders that accepted the offer probably reasoned that now was a good time to acquire Carnival stock. After peaking above $50 in January, CCL plunged below $10 in April as the coronavirus pandemic shut down the cruise industry. Last week, CCL surged above $19 after Pfizer (NYSE: PFE) and Moderna (NSDQ: MRNA) each announced successful COVID-19 vaccine trial results. 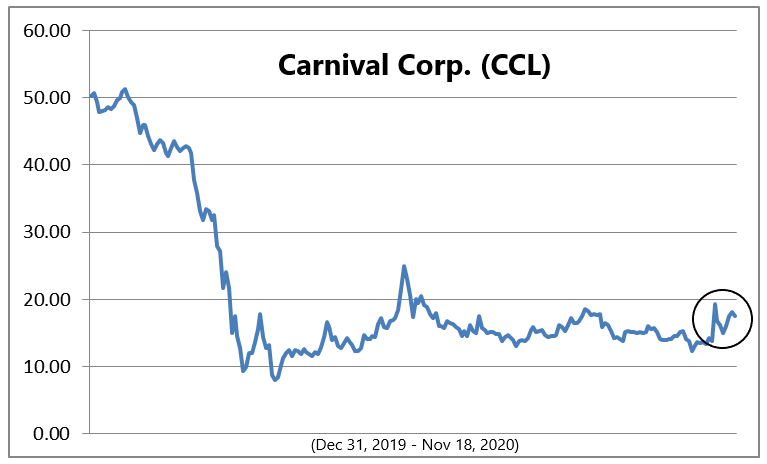 With Carnival getting set to begin cruises in January, the stock was poised for takeoff. However, the day after the bond swap Carnival announced that it will delay its cruise schedule by at least a month. The company said that it needs more time to comply with government regulations regarding COVID-19. As you might expect, CCL fell on the news.

So, if you swapped your Carnival notes for CCL common stock on Tuesday at a price of $18.05, one day later you were saddled with a 2.5% loss. The company disclosed in the bond swap offer that many of the risks and uncertainties associated with the exchange are amplified by the COVID-19 outbreak. However, it did not clearly state that the very next day one of those risks would materialize in the form of a delay in its cruise schedule.

Presumably, the company knew on Tuesday what it would announce on Wednesday. That type of decision is not made without considerable deliberation. If I were one of those noteholders, I’d be upset by the timing of these two events.

Actually, I’m surprised that CCL did not fall further on the news. The bond swap essentially dilutes the existing shareholders by about 7%. Under normal conditions, its share price would have fallen by a similar amount.

To put it mildly, these are not normal conditions. The daily case count of COVID-19 in the United States and Europe is surging out of control. Many cities and states are reimposing severe social distancing restrictions in an attempt to slow down the spread of the disease.

The delay in restarting its cruise operations could end up costing Carnival tens of millions of dollars. Perhaps more, if a spike in COVID-19 this winter pushes the schedule out even farther. The convertible notes that Carnival just took off the books may end up being replaced by new debt to offset the lost revenue.

The noteholders that accepted the deal may figure that they are better selling the stock now and taking a small loss. If they hold the notes until they mature in 2023, they could be worth pennies on the dollar if Carnival doesn’t start operations soon. In that case, the company might have to declare bankruptcy to avoid shutting down altogether. If so, its stock could become worthless.

It isn’t just Carnival that has a problem. All of the major cruise ship operators are in the same boat, so to speak. The same day that Carnival offered its bond swap, Norwegian Cruise Line Holdings (NYSE: NCLH) announced a secondary offering of 40 million shares of common stock. Its share price fell more than 7% that day.

Last month, Royal Caribbean Group (NYSE: RCL) reported negative revenue for the third quarter. How much longer before it, too, must dilute its common stock to remain afloat?

The cruise ship industry is enormously valuable to the ports of call that it serves. The local economies in many European and Caribbean villages are heavily dependent on the tourism income they generate. For that reason, there is a lot of political pressure to get all those cruise ships sailing again.

Of course, there are also lives at stake. Not only on the cruise ships themselves but at the ports of call where passengers disembark. That risk was made clear last week when six passengers aboard a cruise ship tested positive for COVID-19 after successfully passing a battery of tests before setting sail.

That ship was the first to resume operations since the onset of the coronavirus pandemic. Even after seven months of research and planning, it could not avoid an outbreak. On December 1, Royal Caribbean will begin running cruises out of Singapore using a similar set of safety protocols. The entire industry will be watching to see if there are more outbreaks aboard those ships.

At some point, the cruise industry must recognize the reality of its predicament. Unfortunately, that most likely will entail delaying the resumption of operations until every crew member and passenger can be vaccinated for COVID-19. How soon that might be is anyone’s guess, but it certainly won’t be next month.

I don’t like profiting from someone else’s misery, but the upside potential is too big to ignore. Last week, I shared a trade idea for Carnival with readers of my Mayhem Trader service that I believe could jump in value any day now. If you’d like to know more about this profitable opportunity, CLICK HERE.