The Anti-Pot Crusaders Strike Back

Reform of the status quo usually doesn’t occur in a linear, uninterrupted fashion. The status quo rarely gives up without a fight, even if the resistance to change ultimately proves futile. Accordingly, if you think the pot prohibitionists have simply thrown in the towel, you’re sorely mistaken.

Latest case in point: Two law enforcement officials in South Dakota are asking a judge to throw out a marijuana legalization measure that state voters overwhelmingly approved this month. The court challenge, filed last Friday, enjoys the ardent support of conservative Gov. Kristi Noem (R) and is being partially paid for with state funds.

The suit, brought by Pennington County Sheriff Kevin Thom and state Highway Patrol Superintendent Col. Rick Miller, seeks to declare all ballots cast for or against Amendment A null and void and invalidate the changes it makes to the state Constitution.

The challenge claims the constitutional amendment includes at least five separate subjects involving the legalization and regulation of cannabis. Instead of packaging those subjects into a single proposed amendment, the challenge stipulates, organizers should have split them into separate questions on the ballot.

After the South Dakota ballot measure passed on November 3, Gov. Noem said she “was personally opposed to these measures and firmly believe they’re the wrong choice for South Dakota’s communities. We need to be finding ways to strengthen our families and I think we’re taking a step backward in that effort.”

The marijuana industry is closely watching how the South Dakota court challenge fares. Cannabusiness leaders fear that if the suit succeeds, the precedent could pave the way for additional state suits. Indeed, anti-marijuana activists in other conservative “red states” are vowing to follow South Dakota’s lead.

Read This Story: The Epic Cannabis Election of 2020

That said, it’s my contention that marijuana legal reform remains unstoppable over the long haul. Whether you think marijuana legalization is beneficial or immoral is beside the point. The legalization train has left the station and no politician can stop it. Events in South Dakota will likely prove a temporary speed bump, regardless of whether the suit is successful or not. (Legal scholars contend that the suit rests on shaky ground.)

The incoming Biden administration might not wait for Congress to act. Speculation has been increasing that Biden will issue an executive order in his first few days in office that lifts restrictions on marijuana.

On November 22, former Labor Secretary Robert Reich posted a tweet with the headline: “Here are 7 things Biden can do by executive order on Day One.” The seventh item speaks for itself (see tweet below). 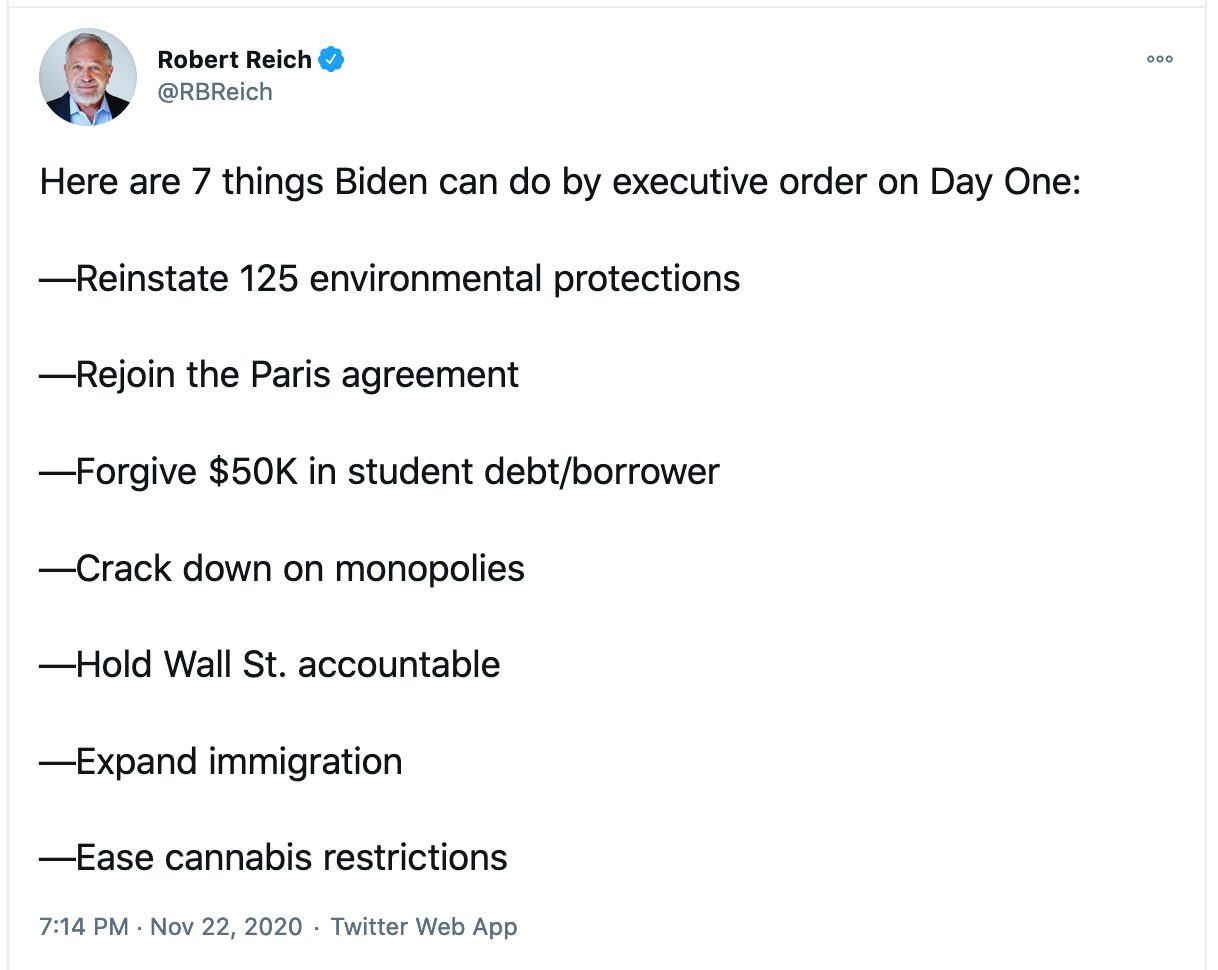 The War on Drugs that started under President Nixon conditioned many people to fear marijuana, but old stereotypes are increasingly debunked by empirical research.

A new Centers for Disease Control and Prevention (CDC) study shows that teen treatment admissions for marijuana fell sharply in most states with legalization. Released on November 19, the report states:

“Consistent with prior research on medical marijuana and adolescent marijuana use, medical legalization status does not appear to correspond to treatment admission trends. Notably, however, 7 of 8 states with recreational legalization during the study period fall into the class with the steepest level of admissions decline…

Although US adolescent marijuana use has not recently increased, the perception of marijuana use as harmful has substantially declined.”

The CDC’s findings contradict prohibitionist claims that legalization would spur a dangerous increase among America’s youth in cannabis use.

The public seems to agree that marijuana doesn’t deserve to be demonized. According to a poll released this month by Gallup: “Majorities of most demographic subgroups of Americans support legalizing marijuana, including by gender, age, education and household income.” Support in the U.S. for legalizing marijuana, Gallup reports, has reached 68%.

The surest way to make investment profits is to tap transformative trends with multi-year momentum. The legalization of marijuana certainly qualifies. My informed hunch is that the legal challenge in South Dakota will eventually fail and similar efforts won’t gain traction elsewhere in the country. If anything, 2021 should prove a banner year for marijuana reform, despite the last gasps of anti-marijuana crusaders. For the best pot stocks to buy now, click here for our report.