As my favorite crooner might put it: Start spreadin’ the news…

The State of New York is a potentially vast market for marijuana. The state exerts an outsized influence in most national matters and it’s about to do so with marijuana. In New York City alone, sales of medical marijuana have soared 50% since the coronavirus outbreak first hit the U.S. in January, as New Yorkers hoard marijuana in quarantine.

November 3 witnessed a slew of pro-marijuana initiatives from coast-to-coast win approval at the ballot box. However, a few major states weren’t part of the electoral action. New York was one of them, but that’s about to change.

A survey released on Tuesday by Sienna College found that New York State voters support legalizing marijuana for all purposes, 60%-32%, up from 55%-40% in February and the highest backing ever. 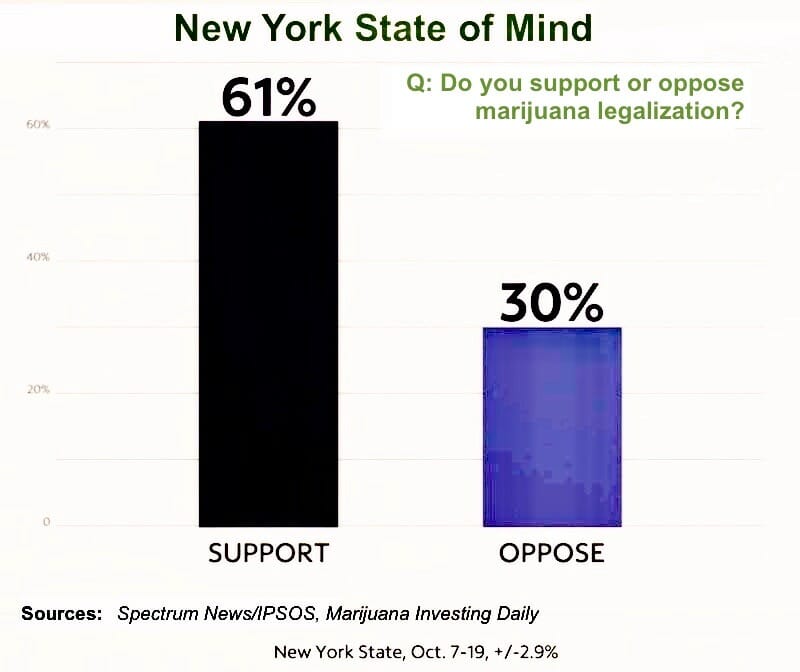 New York Gov. Andrew Cuomo (D) recently said the state will legalize recreational marijuana “soon” to help with the economic recovery from the coronavirus pandemic: “We need revenue and we’re going to be searching the cupboards for revenue. And I think that is going to put marijuana over the top.”

There’s big marijuana money at stake in New York. According to Grandview Research, New York’s marijuana market could be worth $7.07 billion by 2025, up from $1.8 billion in 2018.

As the coronavirus pandemic undercuts state and local budgets throughout the country, political leaders are looking to marijuana legalization as a way to raise tax revenue. Experts estimate that legalizing marijuana in New York could funnel an additional $300 million every year into the state’s coffers.

As state officials across the country get addicted to the tax revenue from marijuana, they’re increasingly averse to any political backlash that could impede the industry.

Read This Story: The Anti-Pot Crusaders Strike Back

Socially conservative groups that seek to roll back marijuana legalization are forced to contend with politicians who relish the tax money from pot.

Legal marijuana also is a jobs generating machine in both the recreational and medical sectors, further proof that the industry and its publicly traded companies have staying power. The marijuana stock swoon last year was traumatic, but those new jobs won’t suddenly disappear. Indeed, now that the industry has consolidated, the surviving companies have seen their share prices soar in recent months.

Marijuana is putting people to work, in biotechnology labs, on farms, behind the counters in dispensary stores and paraphernalia shops, in vaping parlors, in agricultural science…you name it. Marijuana is becoming entrenched as a mainstream business, with more and more families across the country depending on Mary Jane for a paycheck.

According to a recent report produced by marijuana research firm Leafly, the U.S. is currently home to 243,700 full-time-equivalent jobs supported by legal cannabis. That number represents a 15% year-over-year increase, making legal marijuana the biggest generator of new jobs in America. If New York finally manages to legalize recreational marijuana, the state’s cannabis industry could become king of the hill, top of the heap.

Editor’s Note: As this article makes clear, marijuana is a permanent fixture in the nation’s political dialogue and consumer culture. Pot continues to make headlines.

Looking to profit from all of the “buzz” over marijuana? Every retirement portfolio should have at least one marijuana stock. The problem is finding the right marijuana investment. Some pot stocks are poised to make investors rich. Others are destined to go belly up.

Our stock-picking experts have unearthed hidden gems in canna-business that most investors don’t even know about. For our latest research on the best marijuana stocks, follow this link.