Politics in Washington these days more closely resembles a WWE SmackDown than a functioning democracy. Rancor runs deep. Fiscal stimulus before the year ends? Forget about it. But there’s at least one issue on which lawmakers are finding common ground: marijuana legalization.

The U.S. House of Representatives is scheduled this week to take up legislation to legalize marijuana on the federal level, an historic step that could mark the first time a full congressional chamber has voted to end the federal government’s ban on marijuana. The vote could happen as early as Wednesday.

The bill in question is the Marijuana Opportunity, Reinvestment and Expungement (MORE) Act, which would remove marijuana from the federal Controlled Substances Act and open up the industry to multibillion-dollar business opportunities and interstate commerce. The ramifications for marijuana businesses and investors are huge.

Among other things, the MORE Act would expunge the records of those with previous marijuana convictions.

MORE will probably pass the Democratic-controlled House. It faces a more uncertain future in the GOP-led Senate, but odds would improve if Democrats gain control of the Senate after the two Georgia run-off elections in January. As president, Joe Biden would almost certainly sign the bill.

As of this writing on Tuesday, congressional leaders are proposing amendments to the MORE Act, including changes to tax structures. The legislation will go before the Rules Committee on Wednesday.

Other leadership revisions to the MORE Act would clarify that the Food and Drug Administration can continue to exert oversight over marijuana products and marijuana can still be included in drug testing for federal workers.

Efforts to mainstream marijuana have been accelerating on the state level as well. During the November 3 general election, ballot measures in Arizona, Montana, New Jersey and South Dakota to legalize recreational marijuana consumption by adults passed. South Dakotans also approved a separate measure permitting medical marijuana use, as did Mississippi voters.

A divided America is joining hands on marijuana legalization. Anti-pot forces occasionally mount a rearguard action against pot reform, but their efforts tend to be feeble with little chance of success. Public opinion is firmly on the side of normalization.

While these political developments are unfolding, the coronavirus pandemic is boosting sales of marijuana throughout the country. Lockdowns and quarantines have prompted consumers to hoard pot and consume it in greater quantities.

According to a survey released on November 30 by marijuana research firm New Frontier Data:

“Among the most common reasons consumers gave for using cannabis include promoting relaxation, reducing anxiety, and aiding sleep; for many, the pandemic has subsequently heightened those needs. More than half (52%) of consumers reported using cannabis specifically to improve their mental health during the pandemic. Those rates were higher (58%) among consumers under 55 years old, and 63% among those with children under 18 living at home.”

The following infographic tells the story: 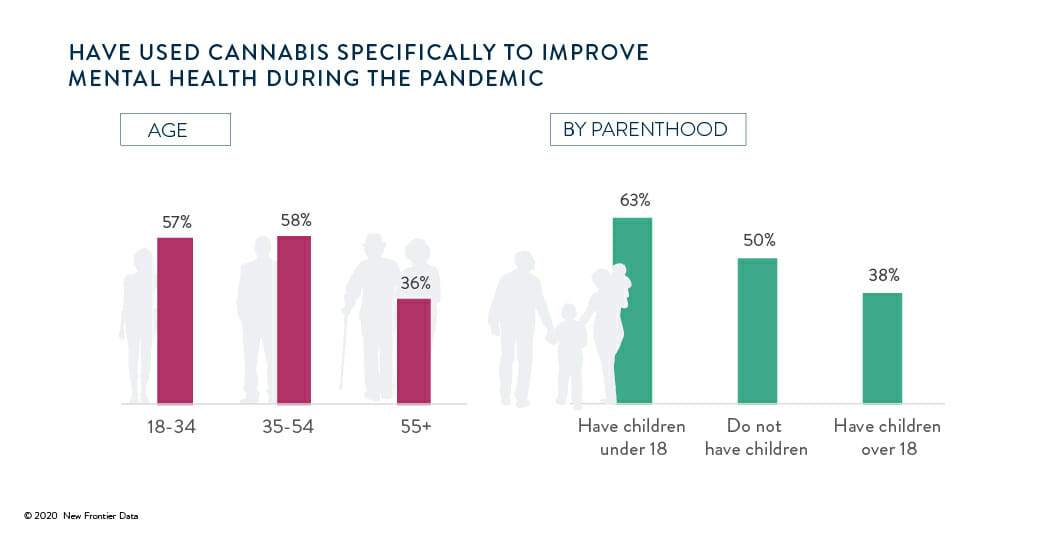 With many restaurants, bars and movie theaters closed during the pandemic, consumers are turning to marijuana, which they can legally enjoy in their homes.

Marijuana dispensaries that provide home delivery are enjoying their best business ever. The coronavirus is a “black swan” event that has devastated many industries, but it has turned out to be a lucky break for the marijuana sector, coming just when cannabis needed a catalyst for growth. Marijuana equities have soared in recent weeks, a far cry from the correction that the sector suffered in late 2019.

It’s an old investment adage: During downturns or crises, so-called sin stocks (alcohol, tobacco, etc.) tend to outperform. Cannabis is no exception. Meanwhile, the demand for novel health treatments and pain remedies won’t abate regardless of the economic cycle or political vagaries.

Editor’s Note: As the above article makes clear, the legalization of marijuana is a social, political and financial revolution that’s making early investors rich. But in the fickle marijuana sector, careful stock selection is all the more important.

This trailblazing small-cap biotech is offering an addiction-proof “marijuana pain pill” that’s about to end Big Pharma’s lock on harmful pain medications. This cannabis-based, non-opiate remedy could be the blockbuster pharmaceutical of the future.

The time to act is now, before this little-known company becomes a household name and its stock price goes ballistic. Click here for details.