During the anti-drug Reagan era, when I was a bearded graduate student at Boston University, if you had told me that Congress would one day legalize marijuana at the federal level, I would have confiscated your car keys and told you to lie down.

Well, this week, we’re on the cusp of an historic moment that I never thought I’d live to see.

The U.S. House Rules Committee on Wednesday cleared a federal marijuana legalization bill for floor action, with debate expected today and a final vote on Friday.

The bill is called the Marijuana Opportunity Reinvestment and Expungement (MORE) Act, a milestone that would finally lift the federal ban on pot. MORE is expected to pass the Democrat-controlled House.

The MORE Act would federally deschedule cannabis and expunge the records of those with previous marijuana convictions. MORE would impose a 5% tax on cannabis sales, the revenue from which would be reinvested in communities most harmed by the War on Drugs. 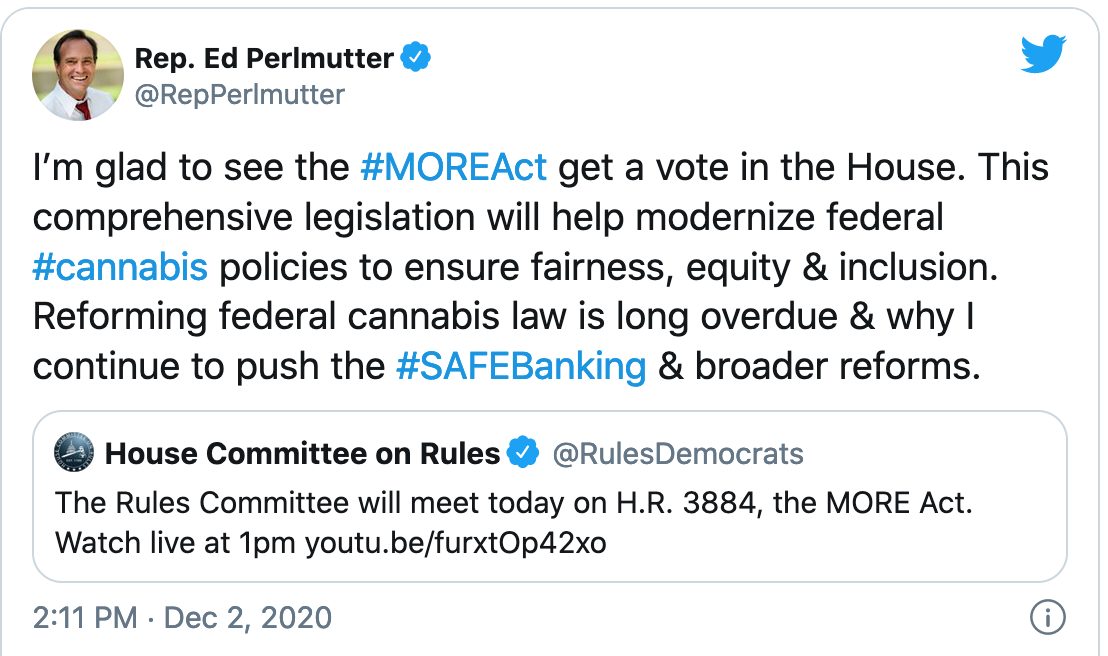 MORE faces an uncertain future in the Senate, but if the Georgia run-off elections in January give control of the chamber to Democrats, passage of MORE into law would be a slam-dunk.

Supporters of legalization say prohibition has failed on all levels. Banning pot has not substantially reduced its use, while wasting billions of dollars on law enforcement that results in racially biased arrests. By comparison, legalization would allow people to use a relatively safe substance without the threat of arrest.

There’s another incentive for legalization that isn’t lost on lawmakers: all levels of government would be able to generate new tax revenues from pot sales.

A catalyst for change…

Passage of MORE in the House would grease the skids for other marijuana bills that have stalled. Notably, we would probably see action on the Secure and Fair Enforcement (SAFE) Banking Act.

Passed by a landslide in the U.S. House in 2019, the SAFE Banking Act would remove the threat of federal penalty from financial institutions that do business with marijuana companies. SAFE still requires the approval of the U.S. Senate and the president’s signature to become law.

The November general election was a major success for marijuana advocates. All state cannabis ballot initiatives passed, which means that more than two-thirds of Americans are now living in states with legal adult-use cannabis.

Marijuana research firm New Frontier Data reports that 71% of Americans now live in a state with either legal adult-use or medical-use programs and only 29% live in states with no legal market.

Projecting a compound average growth rate of 18% over the next five years, by 2025 total annual U.S. legal sales should exceed $35 billion. Between 2020-2025, the total combined U.S. market opportunity for legal cannabis sales is estimated at $172 billion.

Those numbers are impressive, but if MORE becomes law and the feds no longer ban pot, current projections for pot sales could prove conservative. The time to invest in the marijuana industry is now, before the cannabis rocket ship blasts off.

But it begs the question, which pot stocks should you buy? The good news is, my colleague Amber Hestla has done the homework for you.

Amber is chief investment strategist of our premium trading service, Precision Pot Trader. After months of painstaking research, Amber has unearthed a hidden gem in cannabusiness that most investors don’t even know about.

This trailblazing small-cap biotech is offering an addiction-proof “marijuana pain pill” that’s about to end Big Pharma’s lock on harmful pain medications. The company’s cannabis-based, non-opiate remedy could be the blockbuster pharmaceutical of the future. Click here for details.