For journalists like me, caffeine addiction is an occupational hazard. Today, as I drink my favorite coffee (Jamaican Blue Mountain, freshly ground) and write this issue of Marijuana Investing Daily, I’ve decided to channel my caffeine-induced energy into a comprehensive year-in-review examination of cannabis, with an eye toward what it means for the industry’s future growth.

For marijuana, it was a very good year…

Marijuana industry equities underwent a correction in 2019, as inherently weak canna-businesses faced their inevitable day of reckoning. But the industry consolidated during 2020 and now faces 2021 in stronger financial shape. Political, legal and economic trends have moved in marijuana’s favor in recent months, fueling a rebound in pot stocks during the latter half of this year.

Legal marijuana sales in several states have soared during the pandemic, as quarantined consumers stockpile recreational and medical marijuana. Many states and cities designated marijuana dispensaries as “essential businesses” and allowed them to stay open, even as a wide variety of other businesses were shuttered by government fiat.

With restaurants, bars and movie theaters closed, consumers are turning to marijuana, which they can legally enjoy in their homes.

The upward trajectory of marijuana consumption is on track to continue in 2021. America remains divided on many issues but its citizens are joining hands on marijuana legalization. Anti-pot forces occasionally mount a rearguard action against pot reform, but their efforts tend to be ineffectual with little chance of success. Public opinion is firmly on the side of normalization.

On election day November 3, we got a “green wave” at the ballot box. All state cannabis ballot initiatives passed during the election. Five U.S. states passed a total of six ballot initiatives for legalized cannabis programs. Four of those states (Arizona, New Jersey, Montana, and South Dakota) adopted adult-use measures, while Mississippi and South Dakota each legalized medical cannabis.

The result is that two-thirds of Americans are now living in states with legal adult-use cannabis. The following chart summarizes the legal status of marijuana, as of this writing, in all 50 states and the District of Columbia.

Action has occurred on the federal level as well. This month, the U.S. House passed the Marijuana Opportunity, Reinvestment and Expungement (MORE) Act. The landmark MORE legislation would remove cannabis from the federal Controlled Substances Act, expunge past marijuana-related convictions and require certain criminal cases to be resentenced.

Read This Story: Federal Pot Laws: The Times They Are a-Changin’

Less than a week later, the House passed separate legislation to expand marijuana research. The bill would compel the Drug Enforcement Administration to register more growers and allow scientists to study cannabis that consumers buy from state-legal dispensaries.

These two House-passed bills enjoy bipartisan support and face good prospects of passage in the Senate in 2021. Senate Majority Leader Mitch McConnell (R-KY) has previously opposed marijuana legalization but his stance appears to be softening. President-elect Joe Biden has indicated he would sign the two bills if they reach his desk. If the Democrats gain control of the Senate after the Georgia run-off elections in January, the ultimate passage of both bills is assured.

The above trends are generating powerful tailwinds for the marijuana industry’s long-term growth. New Frontier Data projects that total U.S. legal cannabis sales will surpass $20 billion in 2020, with the combination of post-election expansion and existing state markets fueling a projected compound annual growth rate of 21%, to reach $41.5 billion by 2025 (see chart). 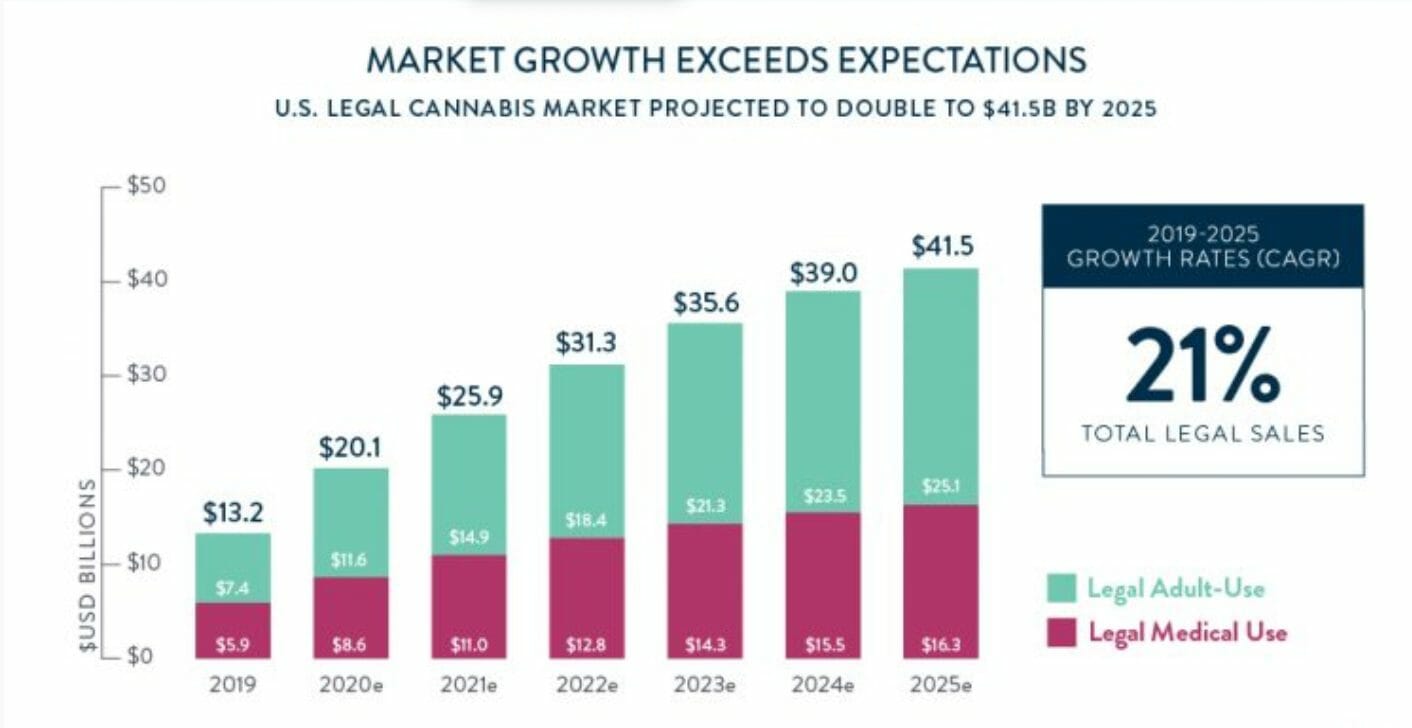 The House vote to approve MORE has brought our country closer to marijuana legalization than we’ve ever been in history. The current political environment means we could be one Senate vote away from full legalization. And the timing couldn’t be better. Our investment team just uncovered one neglected pot company that’s set to blast off when it does. Click here for details.