IPO Investors: Be Careful What You Wish For

Looking for a hot initial public offering (IPO) this week? I can’t blame you if you are. The IPO market is red hot. Below, I explain how you can leverage that unbridled enthusiasm to your advantage.

On December 9, DoorDash (NYSE: DASH) went public at $102. That day, it closed above $189 for an 86% gain in one day. The next day, Airbnb (NSDQ: ABNB) more than doubled in value during its first day of trading as a public company.

Read This Story: Airbnb IPO Houses a Host of Problems

The lone exception to the IPO frenzy was ContextLogic (NSDQ: WISH). WISH fell 17% during its first day of trading on December 16. More than 60 million shares changed hands that day. That’s a sure sign that few of its IPO shareholders were in it for the long run.

So what is it about WISH that makes it different from the others? None of the five companies are profitable. All of them have a high-tech angle to their business models that appeal to momentum investors.

With the exception of BioAtla (a biopharma drug developer), the other four operate under a similar revenue model. Each of them earns a fee for connecting a buyer to a seller. None of them actually makes anything themselves.

The problem with WISH is that it is moving in the wrong direction. This year, the company lost $176 million over the first nine months of the year compared to a $5 million loss over the same span last year. Perhaps that’s why WISH decided to go public now.

There are two reasons why a company decides to go public. Either it needs more capital to invest in future growth or it wants to sell its problems to someone else.

I know, because earlier in my career I worked as a syndicate coordinator for a regional brokerage firm. Putatively, my job was to facilitate the flow of information between companies going public and financial advisors to ensure that a deal was priced appropriately.

In reality, I spent a lot of my time having private conversations with people close to the deal to discover what was really going on. In one case, the primary driver behind the IPO was to raise enough funds to allow the company’s founder to finance his divorce settlement.

Another time, a company founder knew he was terminally ill and wanted to cash out before that became known. If that news broke before the IPO, there would have been considerably less interest in the deal.

For that reason, I am innately suspicious of the motives behind an IPO. Most of them are done for the right reasons. But every once in a while, I run across one that smells funny. Such was the case three years ago when Funko (NSDQ: FNKO) went public.

My concern with that deal was that most of the proceeds from the stock sale would go to the company’s insiders. Almost none of the money would end up as working capital to grow the business. That could be a problem later on if the company ran into trouble and needed to raise more money.

In November 2017, FNKO went public at $12. Over the next two years, it climbed above $25. Then, the bottom fell out. The company was accused of overstating its financial performance. As of last week, FNKO was still trading below its IPO price. 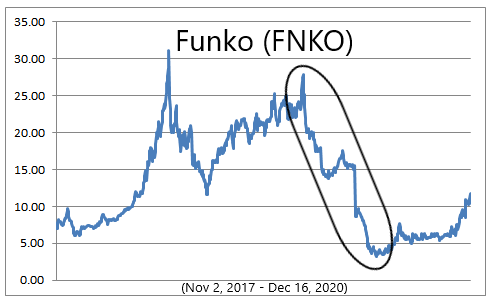 The IPO market can be quite lucrative if you are able to buy shares at the offering price. The problem is that those shares are reserved for a small universe of big investors. They are a broker’s most profitable customers and expect to be treated as such.

How can you participate in the IPO market without getting soaked? One way is to buy shares of the Renaissance IPO ETF (NYSE: IPO). The fund’s top five holdings are Uber (NYSE: UBER), Moderna (NSDQ: MRNA), Zoom Video Communications (NSDQ: ZM), Pinterest (NYSE: PINS), and CrowdStrike Holdings (NSDQ: CRWD).

Despite its name, this exchange-traded fund does not buy shares at the initial public offering price. Instead, it tracks the performance of an index that consists of companies that recently went public. The objective is to participate in the price momentum of these stocks during their first two years of trading before they become stale.

The two-year figure is no accident. Historically, that’s when most IPOs start to lose momentum. By then, most of the early shareholders have either sold their shares or decided to hang on for the long haul.

The next generation of profits…

An average annual return of nearly 20% is certainly a good result, but we think you can do much better. One way to reap outsized gains is to latch onto transformative trends with long-term momentum. Few trends are as powerful as the global implementation of 5G (“fifth generation”) wireless technology.

5G technology provides faster and higher capacity transmissions to carry the massive amounts of data generated by the Internet of Things. The companies involved in 5G include telecoms, chipmakers, modem/IP suppliers, and systems integrators, among others.

We’ve pinpointed a company that’s a crucial player in 5G. In fact, without this company’s proprietary technology, 5G would grind to a halt. This investment play is flying under the radar and the time to buy shares is now. For details click here.