Netflix: A Thorn in The Crown

Without a doubt, Netflix (NSDQ: NFLX) is one of the great stock market success stories of this century. Over the past five years, NFLX has gained over 350%. That is more than three times the return of the SPDR S&P 500 ETF Trust (SPY) over the same span.

For that reason, Netflix is a member of the venerated FAANG quintet of “must own” momentum stocks. It shares that distinction with Facebook (NSDQ: FB), Amazon.com (NSDQ: AMZN), Apple (NSDQ: AAPL), and Google’s parent Alphabet (NSDQ: GOOGL).

But look a little closer at how Netflix has traded this year and an unsettling pattern emerges. Over the past six months, NFLX has risen above $550 three times only to plunge below $480 shortly thereafter. 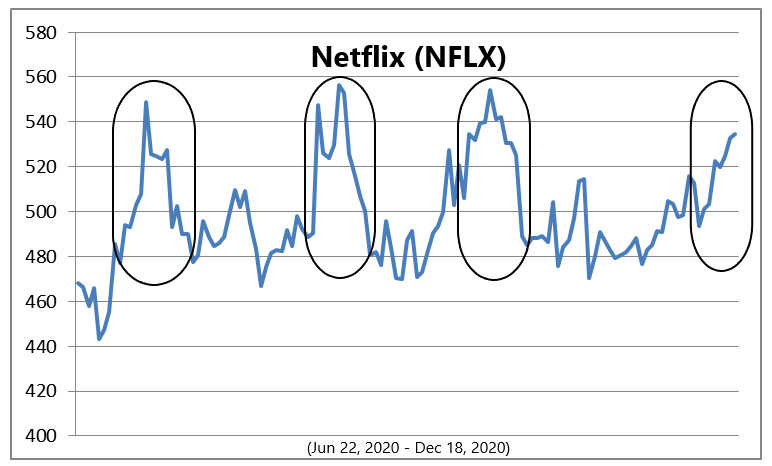 Now, it appears that Netflix is on its way to once again reaching $550. NFLX is up 7% over the past three weeks, ending last week near $534. Another couple of weeks at that pace and it would crest above $550.

If that happens, there may be an opportunity to score a quick profit on the stock’s next nosedive. However, I don’t recommend shorting the stock. There’s too much risk in that. One of these days, NFLX will keep rising in which case covering that short position could prove very costly.

Instead, I suggest buying a put option on Netflix. For example, last week while NFLX was trading near $535, the put option expiring on February 19 at that strike price could be bought for $40.

For that option to become profitable, NFLX must fall below $495 within the next eight weeks. If it once again drops down to $480, that option would have $55 of intrinsic value.

I’m not hoping that Netflix goes out of business. In fact, I subscribe to its service so I can watch programs such as The Crown and The Queen’s Gambit.

Apparently, so do a lot of other people. Over the first nine months of 2020, Netflix added 28.1 million paid members to its customer base. However, nearly 26 million of that number joined during the first half of this year.

The third quarter wasn’t nearly as strong. Netflix gained 2.2 million paid net subscribers during Q3, less than the 2.5 million guided for by the company at the start of the quarter.

That unexpected bad news released in late October explains the stock’s most recent foray below $480. While the rest of the market rallied strongly in November, NFLX went nowhere.

At the same time, Netflix guided for 6 million net additions during the fourth quarter. That is considerably less than the 8.8 million new subscribers from Q4 last year.

The company claims not to be worried about that trend. It expected “record first half paid net additions would result in slower growth in the back half of this year.”

I do not doubt the veracity of that statement. I’m sure that a lot of people joined Netflix earlier this year when the coronavirus pandemic forced them to spend a lot more time at home.

Of greater concern is the company’s admission that “We would expect that our growth will revert back to levels similar to pre-COVID. In turn, we expect paid net adds are likely to be down year over year in the first half of 2021.”

That makes sense, and the company is wise to tamp down expectations for next year. However, that calls into question the very high earnings multiple assigned to NFLX.

Netflix is currently valued at 60 times forward earnings, about the same multiple assigned to AMZN. However, Amazon is not expecting a slowdown in sales growth next year.

The rest of the FAANG stocks are all valued at closer to 30 times forward earnings. That is half the multiple assigned to NFLX, even though most of them expect higher sales growth.

I don’t think NFLX will lose half its value anytime soon. For that to happen, the overall stock market would have to go into a steep correction.

However, I can easily see NFLX falling back below $500 early next year. The company is scheduled to release its Q4 and full-year results on January 19. If those numbers are disappointing, the options trade described above could be a big winner.

Editor’s Note: Our colleague Jim Pearce just described an options trade that could pay off in a big way, but maybe options trading isn’t for you. If you’re risk averse and looking to hedge your portfolio during these pandemic-fraught times, consider the classic hedge of gold. The “yellow metal” outperforms when uncertainty reigns.

We’ve pinpointed an under-the-radar gold miner that shines above the rest. This small-cap “rocket stock” is poised to blast off, but most of Wall Street hasn’t even noticed the company. The time to invest in this gold mining play is now. Click here for details.