We’ve enjoyed a stock market rally that I expect to continue in 2021. Sure, the coronavirus pandemic, high unemployment, and other headwinds make conditions less than perfect for stocks. But to paraphrase the French philosopher Voltaire, we won’t let the perfect be the enemy of the good.

When 2021 gets underway, tailwinds will include loose monetary policy, fiscal stimulus, the likely cessation of trade war, the winding down (more or less) of political chaos, the resumption of robust corporate earnings and revenue growth, COVID-19 vaccine distribution, and the investment “animal spirits” that usually accompany the advent of a new administration in the White House.

In this pandemic-stricken year, much of humanity suffered but the investment class got richer. People with skills suitable for the digital work-at-home economy weathered the storm. Of course, millions of other Americans haven’t been as fortunate. But keep in mind, about half of U.S. households don’t own stocks. Among those who do, the richest 10% own 84% of the total value of these shares. Hence the disconnect between society’s overall struggles and the markets.

If you’ve been following my “defensive growth” strategy this year, you should be sitting on decent gains. The major stock market indices are hovering near record highs (I’ll provide the final year-end numbers in my Mind Over Markets column on Monday, January 4.)

Since the pandemic became apparent in the U.S. in early 2020, I’ve recommended hedging strategies to protect your wealth during the economic fallout. But at the same time, I’ve also counseled you to remain heavily invested in stocks, with guidance as to the key areas of opportunity.

Watch This Video: Running With The Bulls

This investment stance should continue to pay off in 2021. Markets are forward looking and Wall Street expects faster economic growth next year, a reasonable expectation considering underlying conditions.

Before the opening bell Thursday morning, the S&P 500 stood at 3,732.04. With 2020 nearing its end, analysts are making predictions for the closing price next year of the S&P 500. The consensus expectation is for the S&P 500 to close above 4000 by the end of 2021 (see the following chart, compiled with data as of December 14, from research firm FactSet). 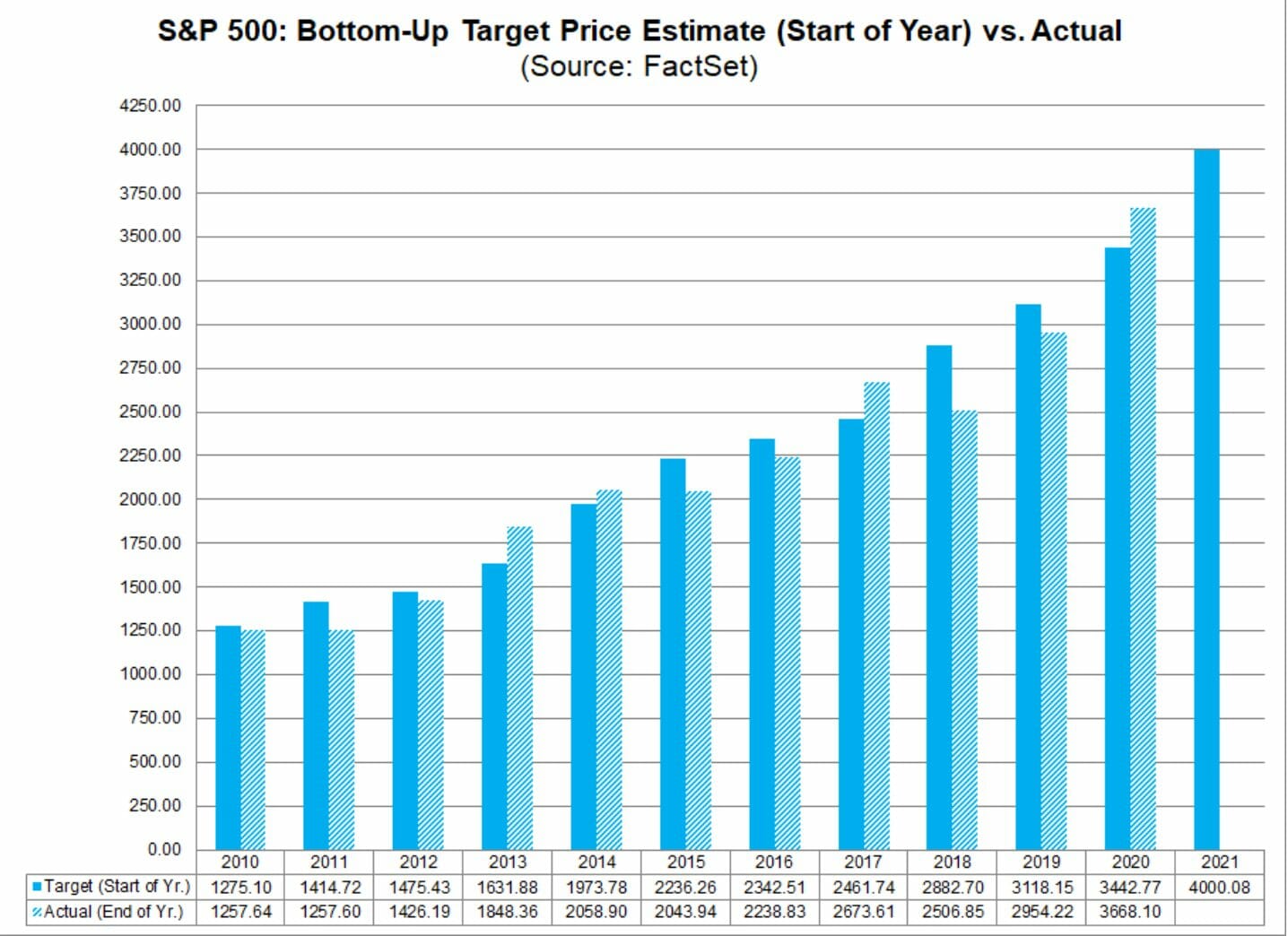 This bottom-up target price for the index is calculated by aggregating the median target price estimates (based on the company-level target prices submitted by industry analysts) for all the companies in the S&P 500 index.

A major source of optimism for investors is the resolution this week of Brexit. Approval of a trade deal between Britain and the European Union (E.U.) was pushed through the British Parliament in just a single day on Wednesday, with overwhelming bipartisan support. That’s an astonishing feat, considering how both sides have been bitterly wrangling over Brexit for more than four years.

The E.U. is a political and economic union of 27 member states that are located primarily in Europe. The E.U. had 28 members until Britain voted to leave by referendum in June 2016.

The E.U. is the largest trade block in the world. Before the E.U. was created in 1993, many pundits worried that a cohesive political and economic union would be overcome by cultural differences, extreme nationalism, and deep-seated acrimony as a result of centuries of wars. But the visionary founders of the E.U. tried anyway, in the hopes that the development of a common identity would keep the peace and foster greater prosperity.

Britain voted to leave the E.U. for many reasons, chief among them a general detestation among Britons of immigrants. After the surprise vote to leave, the pessimists argued that the grand E.U. experiment had failed and other members would soon follow. As is often the case, the pessimists were wrong.

The Brexit compromise imposes additional customs checks and inspections on British goods, but spares the country from tariffs and quotas when trading with Europe. Details remain to be discussed and the tentative deal requires approval of the British and E.U. parliaments, but for all intents and purposes, the Brexit drama is over.

Starting January 1, Britons will no longer be members of the E.U., with all the rights and responsibilities. Travel to and from the Continent will involve more red tape. But here’s the important point: The completed Brexit deal imposes no tariffs and no quotas for goods traded between Britain and the E.U. The dire consequences of a no-deal (aka “hard”) Brexit have been averted. The damage to consumers and businesses on both sides of the English channel will be much less than feared.

The resolution of Brexit strengthens the bull case for 2021. The Brexit deal is far from perfect, but as the Frenchman Voltaire might have said, it’s good enough.

Editor’s Note: In previous Mind Over Markets articles, I’ve devoted considerable editorial coverage to one of the greatest growth opportunities of 2021: the roll-out of 5G (fifth generation) wireless. After months of research, our investment team has found the best 5G play. Click here for details. In the meantime, Happy New Year.