As January looms on the calendar, I’m reminded that the month is named for the Roman god Janus. In ancient Roman myth, Janus is the god of beginnings and endings. He is depicted as having two faces, because he simultaneously looks to the future and the past. Janus is the god of time, gates and passages.

Let’s take a look at the marijuana market’s recent past and see what it portends for 2021. Will the past serve as prologue? In other words, will history set the context for the future?

So far, the omens are promising.

In 2020, marijuana was the fastest-growing industry in the United States. By the end of 2021, the legal industry is expected to be worth at least $25 billion.

A record-high percentage of Americans (68%) now support cannabis legalization. During the November 3 general election, one of the biggest winners was marijuana. Legalization measures passed in Arizona, Montana, Missouri, New Jersey and South Dakota. More than one-third of the country (over 111 million people) currently live in a state with legal recreational cannabis.

Legal cannabis sales reached nearly $20 billion in 2020 and are expected to exceed $40 billion annually within the next four years. The legal cannabis market supports about 244,000 full-time-equivalent American jobs and generates billions of dollars in tax revenue.

In December 2020, the U.S. House passed the Marijuana Opportunity, Reinvestment and Expungement (MORE) Act. The landmark MORE legislation would remove cannabis from the federal Controlled Substances Act, expunge past marijuana-related convictions and require certain criminal cases to be resentenced.

The marijuana industry was of course ecstatic, as this tweet from the advocacy group NORML shows: 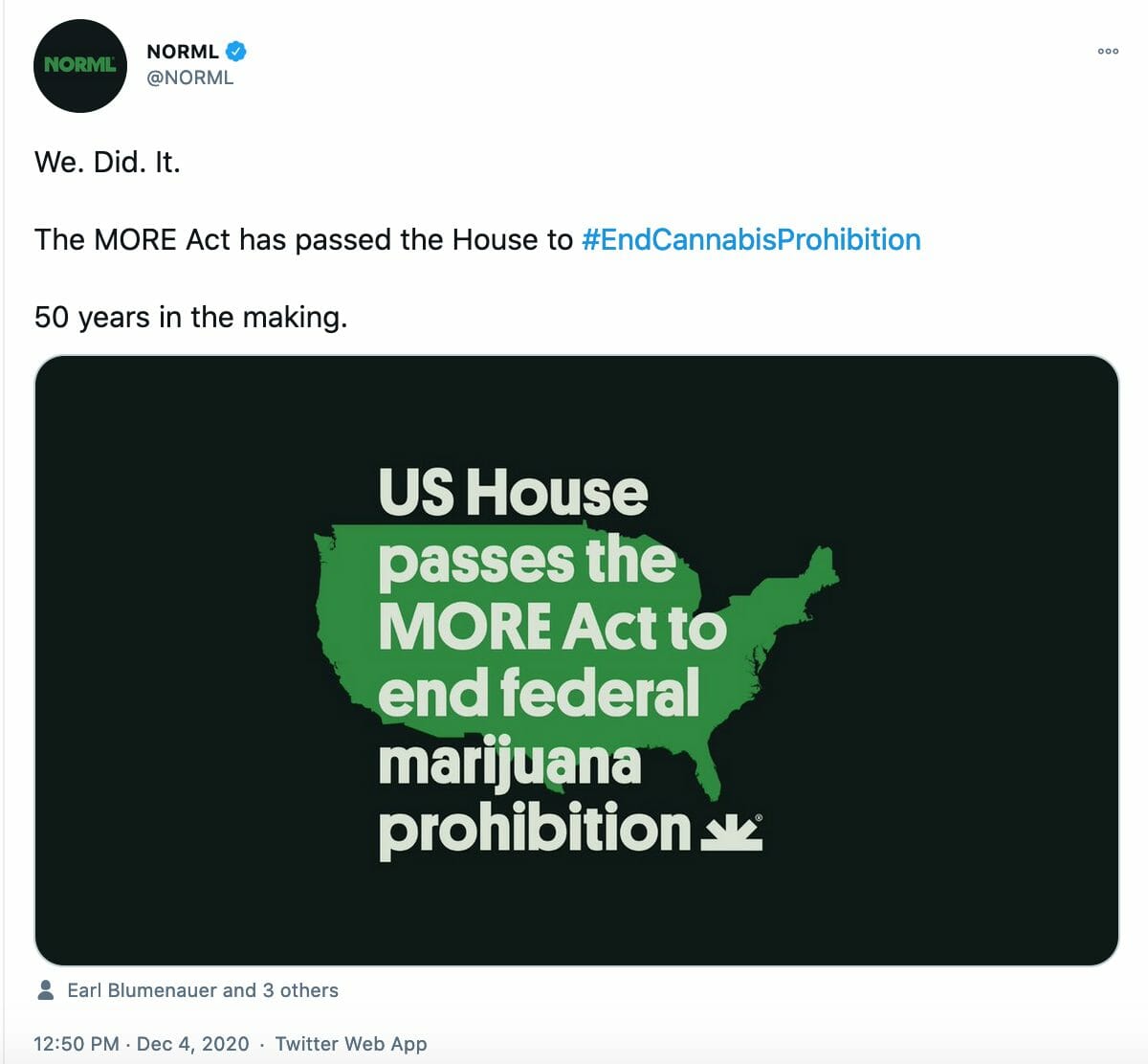 President-elect Joe Biden has indicated he would sign MORE if the bill reaches his desk. However, Senate Majority Leader Mitch McConnell (R-KY) has expressed opposition to MORE.

Read This Story: Cannabis Investors: Georgia On Their Minds

Keep an eye on Georgia. Democratic wins in the state during the January 5 run-offs would grease the skids for MORE and provide a catalyst for marijuana equities to soar.

Legislation is pending in several states that would lift restrictions on marijuana to one degree or another. I think it’s only a matter of time before the federal ban on pot gets lifted, but until then, more states this year will step into the breach.

Technological innovation will accelerate this year in the legal industry. Marijuana e-commerce will continue to flourish, even when the pandemic is finally over. Dispensaries will adopt sophisticated enterprise-level software tools to streamline operations, enhance the customer experience, and ensure regulatory compliance.

Coming to the fore in 2021 will be marijuana’s “pick-and-shovel” plays. These tech-focused companies aren’t necessarily about growing marijuana nor are they developing cannabis-derived drugs. They’re infrastructure stocks that can be hugely profitable.

Among marijuana infrastructure companies, some of the more promising firms deploy controlled environment agriculture systems that are designed to use as little land, water and energy as possible. They market themselves as eco-friendly as well as more cost-effective. These companies have designed vertical farming solutions that use the latest pot growing techniques, including hydroponics and specialized lighting products.

The best news is, federal legalization of cannabis is a distinct possibility in 2021. This pivotal event would enhance industry liquidity and generate a flood of new investment deals.

The current political environment means we could be one Senate vote away from full legalization of marijuana. Our investment team just uncovered one neglected pot company that’s set to blast off when it does. The time to buy the company’s stock is before this seismic event occurs. Click here for details.