Putting Cannabis to the Test

As P.T. Barnum said, there’s one born every minute. Want to make profits in cannabis, without becoming a sucker? You must stick to the fundamentals. Look beneath the razzle-dazzle and study the financial statements. The words “cannabis” or “marijuana” in a company’s title don’t guarantee success.

When seeking to buy pot stocks, scrutinize company balance sheets. Make sure there’s reasonable cash flow to cover operating expenses. Too many investors are jumping aboard the marijuana bandwagon without first examining the financial fundamentals.

In addition to dubious penny stocks and pump-and-dump schemes, the marijuana industry also is plagued by a lack of standards. This problem is coming to the fore in the cannabis testing industry. If left unaddressed, doubts about testing veracity could erode consumer confidence in marijuana products.

Regulators warn that some unscrupulous marijuana businesses, e.g. growers, processors, and manufacturers, are shopping around for labs that will give them preconceived results in terms of THC potency and contaminants.

Other cannabis businesses are reported to be sending samples to testing labs of marijuana products that have been illegally adulterated to give the semblance of higher THC content. This ruse is accomplished by spraying marijuana oil or sprinkling THC crystals on the marijuana, among other methods.

On a mounting basis around the country, regulators are fining companies and closing testing labs as reported results don’t match official audits.

Recent case in point: The Washington State Liquor and Cannabis Board (LCB) last month suspended the license of Praxis Laboratory for allegedly falsifying testing data on more than 1,200 samples of cannabis by providing higher THC numbers than tests actually found. While the lab is shut down, state regulators are seeking to permanently revoke its license.

According to a LCB release: “Labeling cannabis with falsely high THC potency levels is a form of consumer deception and is prohibited under Washington law…During the investigation the lab owner attempted to destroy evidence of falsified data in an effort to obstruct (the agency’s) ability to conduct a complete investigation.” The lab denies the charges and is appealing the ruling.

The growing need for quality assurance…

Praxis is a private company but its sudden notoriety underscores the increasing prominence of marijuana testing, which is attracting a flood of venture capital and investor interest.

The increasing legalization of cannabis is generating new growth avenues for testing laboratories. According to the research firm Global Market Insights, the global cannabis testing market is on track to reach $2 billion in annual sales in 2025, for a five-year compound annual growth rate (CAGR) of 13%. Long known for its excellence in lab testing, Germany is a dominant player in this space. 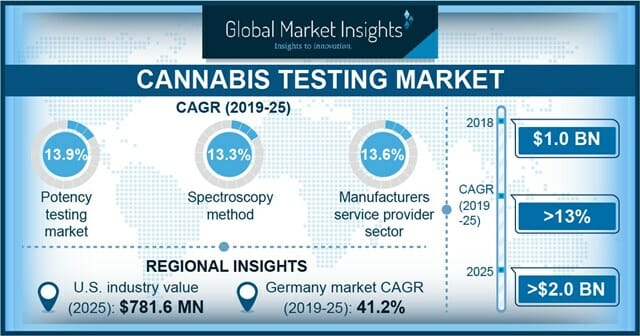 Problem is, many of these pick-and-shovel plays are penny stocks with low floats, low volume, and next to no revenue. They’re on the radar now largely because the yakking pundits on financial news channels are obsessed with the cannabis sector. Marijuana investing is a sexy topic that boosts ratings.

As often happens when a disruptive industry is booming, we’re seeing a proliferation of marijuana penny stocks. Some of these stocks are worthwhile plays, but many others are hyped-up scams that prey on the gullible.

Medical marijuana is one of the biggest investment opportunities of a lifetime. Marijuana biotech firms and testing labs are interdependent sectors that are generating synergistic growth. Biotech growth expands demand for testing. By the same token, advances in testing boost biotech.

Cannabis investments, especially in biotechnology, confer market-beating potential and they’re a must for your portfolio. But the key is finding the right pot stocks. You need to conduct due diligence.