Investors Climb the Wall of Worry

All in all, it’s just another brick in the wall.

I played a lot of Pink Floyd during my formative years, so you’ll forgive me if those lyrics are stuck in my head right now. When stocks march higher in the face of several risks, they’re proving an old Wall Street adage: stocks climb walls of worry. This expression refers to the stock market’s tendency to climb when investor fears don’t materialize.

Wall Street has been scampering up the wall of worry, brick by brick, as it shrugs off the coronavirus pandemic. The strengthening economic recovery is assuaging investor worries.

In the Georgia Senate runoffs, as of this writing Wednesday morning, Democrat Raphael Warnock had defeated Republican Kelly Loeffler and the race between Democrat Jon Ossoff and Republican David Perdue was too close to call. If Ossoff wins, the Democrats obtain Senate control, which means Wall Street will be on track to get legislation it likes (e.g., significant fiscal stimulus) and some it doesn’t like (higher taxes and regulation).

But investors have other matters on their minds besides just politics. When it comes to the coronavirus crisis, the widespread hope is that new vaccines will save the day. Vaccines aren’t a magical silver bullet, but they at least signal light at the end of the pandemic tunnel.

Despite COVID’s terrible human toll, the economy is showing resilience. The Institute for Supply Management (ISM) reported Tuesday that economic activity in the manufacturing sector grew in December, with the overall economy posting the eighth straight month of growth.

The December Manufacturing Purchasing Managers Index (PMI) reached 60.7% last month, up 3.2 percentage points from the November reading of 57.5%. ISM’s PMI is based on data compiled from monthly replies to questions asked of purchasing and supply executives in over 400 industrial companies.

As the following table shows, the ISM’s PMI has been steadily increasing over the past 12 months, which of course bodes well for the economy and by extension stocks: 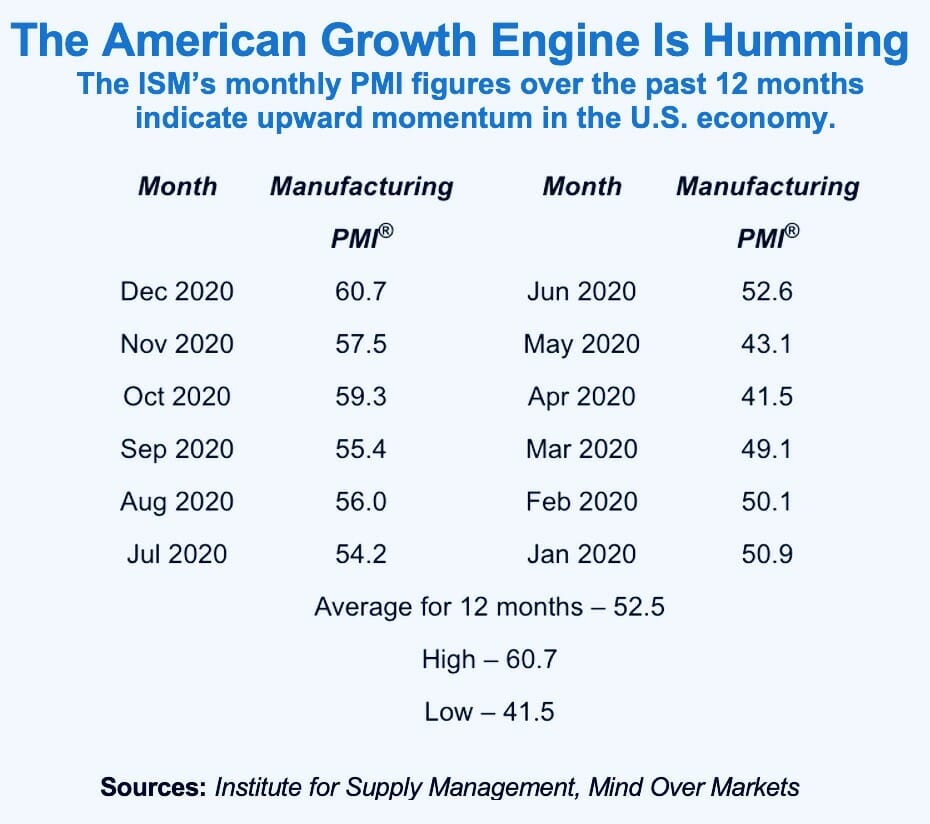 Buoying the economy and stocks during the pandemic has been unprecedented Federal Reserve stimulus. The Fed has slashed interest rates to near zero and pledged to buy bonds in nearly all segments of the credit market, including government and mortgage securities and corporate and municipal bonds. The central bank’s largess should continue for at least the rest of 2021 and probably beyond.

Moreover, expanding Democratic power in Washington points to Keynesian “pump priming” this year, in the form of infrastructure spending and other initiatives. That’s beneficial for certain cyclical sectors, such as construction.

The teachers in my Econ 101 course would have argued that this surge in money supply would lead to high inflation, but that hasn’t been the case. The latest data point to muted inflationary pressures, largely because of pandemic-induced slack in the jobs market and economy.

This combination of stimulus, low inflation and easy money is manna for equities. It seems that reports of Goldilocks’ demise were premature, as economic growth stays not-too-hot, not-too-cold.

The future beneficial effects of stimulus are fueling bullish sentiment. The $900 billion coronavirus relief package passed by Congress in the waning days of December will provide a bridge for struggling American households and businesses until the new Congress can cobble together further aid this year. President-elect Joe Biden has referred to December’s stimulus package as a “down payment.”

Rest assured, it’s inevitable that COVID-19 will be contained. The ground has been fertilized for future growth. The unexpected strength of China’s economy is another major tailwind.

Read This Story: Bull in a China Shop

This week in the U.S., we’ll get further clues as to the strength of the economic recovery. On the docket in coming days: initial jobless claims and ISM’s services index (Thursday) and the unemployment rate (Friday).

Prediction is often just an expression of preconceived desires, but I’m sufficiently confident in the strength of economic growth to predict the bull market will continue in 2021. A shrewd strategic move now would be to increase your exposure to cyclical growth stocks, with the following allocations as a general rule of thumb: 45% cash, 30% stocks, 15% hedges, 10% bonds.

In previous Mind Over Markets articles, I’ve devoted considerable editorial coverage to one of the greatest growth opportunities available: the roll-out of 5G (fifth generation) wireless. After months of research, our investment team has found the best 5G play. Click here for details. 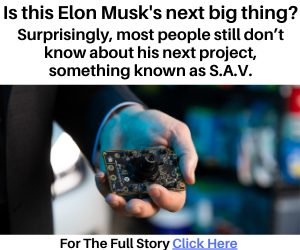