Also referred to as a “blank check” company, a special purpose acquisition company (SPAC) raises money from investors via an initial public offering (IPO). It then uses that money to acquire a private business. That may sound like a reckless way to invest, but it can also be quite lucrative.

Below, I’ll explain how you can get in on the action. But first, a quick review of what a SPAC is and why it has become so popular recently.

The advantage of a SPAC is that it can convert a company from private to public in considerably less time than a conventional IPO. There is no need for roadshows to build investor interest in the deal. Instead, a SPAC merges with a privately held company by buying its stock.

Speed matters when the market is moving fast and investor interest in a particular business or product is at a fever pitch. A year ago, online gambling website DraftKings (NSDQ: DKNG) merged with a SPAC shortly after the coronavirus pandemic closed casinos which triggered a spike in Internet betting activity.

DraftKings merged with Diamond Eagle Acquisition in April 2020. At that time, the SPAC was trading below $20. Six months later, DKNG peaked above $64. 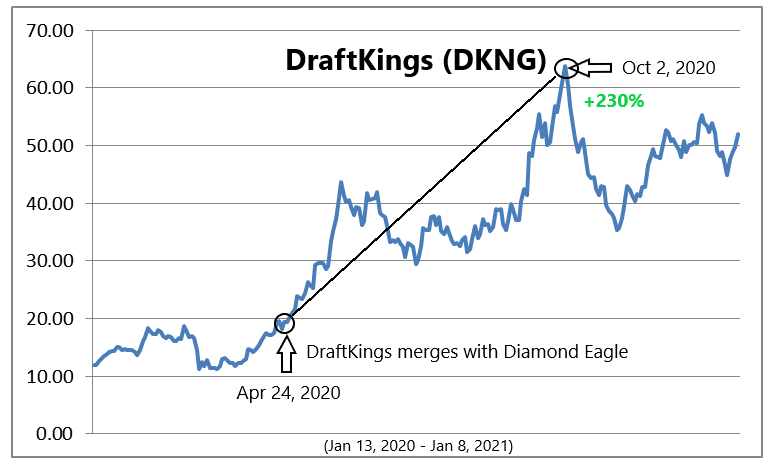 Investors that got in on the Diamond Eagle IPO in May 2019 at $10 made more than 500% in just 16 months. It is that type of performance that has piqued interest in SPACs.

The disadvantage to a SPAC offering is that it effectively neuters the purpose of Securities and Exchange Commission (SEC) disclosure requirements. Since the business to be acquired is unknown at the time of the IPO, there is no way to inform investors of what the specific risks to it might be.

In that respect, a SPAC is more of a “trust me I know what I’m doing” type of transaction. The sponsors of the SPAC are usually wealthy private equity investors. They have a lot of their own money in the deal and stand to profit enormously if it works out.

That is, if the SPAC can convince the target company to merge with them. Last July, hedge fund manager Bill Ackman raised $4 billion for his SPAC, Pershing Square Tontine (NYSE: PSTH). Ackman hoped to use PSTH to take Airbnb (NSDQ: ABNB) public. Instead, Airbnb spurned the activist investor in favor of a traditional IPO.

Last week, Ackman’s SPAC jumped more than 10% on rumors that a new merger candidate would soon be announced. The same thing happened in late November when PSTH considered merging with a private fintech (financial technology) company.

Thus far, neither of those rumors has borne fruit. Nevertheless, PSTH has appreciated 40% since it went public five months ago even though it has no employees and generates no revenue.

That degree of speculation illustrates the current level of interest in SPACs. More than $20 billion was raised in SPAC offerings last year, a 50% increase over 2019. With the stock market hitting an all-time high last week, more SPAC deals are likely on the way.

Instead of trying to guess which SPAC is going to pay off big, consider buying shares of the Defiance Next Gen SPAC Derived ETF (SPAK). SPAK went public on October 1 at $25 and has recently been trading near $30.

The fund has $23 million in assets. Its largest holding is DraftKings, followed by Clarivate (NYSE: CCC), Vertiv (NYSE: VRT), and Virgin Galactic Holdings (NYSE: SPCE). With more SPAC deals on the way, this fund could have a banner year in 2021.

However, the recent success of SPACs could also be their undoing. Wall Street makes a lot of money from IPOs. It also has a lot of lobbyists in Washington, DC looking out for its best interests.

For those reasons, we may see increasing pressure to regulate SPACs more tightly later this year. The SEC recently issued an Investor Alert regarding SPAC offerings. With a Democrat in the White House, the SEC may feel that now is the time to clamp down on SPACs.

I don’t expect that to happen right away. President-elect Joe Biden has bigger priorities coming into office. Unemployment is high and COVID-19 is still raging out of control. The last thing Biden wants to do is give the stock market one more reason to take a dive.

But later this year after the coronavirus pandemic has been tamed, the SPAC party may come to an end. That will also depend on who Biden appoints as the next SEC Commissioner. A progressive reformist may want to do away with SPACs altogether. In that case, we may be seeing the last of the SPAC deals right now. I hope that doesn’t happen, but it is a risk that can’t be ignored.

Editor’s Note: The economy is improving, stocks are rallying, and the roll-out of vaccines provides hope that we’ll get the coronavirus pandemic under control. But we’re not out of the woods…not by a long shot.

As the above article makes clear, risks still lurk around the corner. More than ever, you need to be selective with your investments.