This week, shares of Signal Advance (OTC: SIGL) surged more than 800% in a single day. You may be forgiven if you have never heard of the company. With a market cap of less than $500,000 even after the huge gain, SIGL trades on the “pink sheets” of the over-the-counter market.

If you aren’t familiar with the pink sheets, that is where the smallest publicly traded companies are listed (back then, that list of stocks was actually printed on pink paper to warn brokers of their illiquidity). Some days, there is no trading volume at all in them. As my first manager once told me, the pink sheets are where stocks go to die.

So why the sudden interest in Signal? On January 7, Tesla (NSDQ: TSLA) CEO Elon Musk tweeted “Use Signal” to his 42 million Twitter followers. Immediately, the trading algorithms that act on headline news went to work. If Musk is endorsing Signal, then by golly there must be a good reason for it. 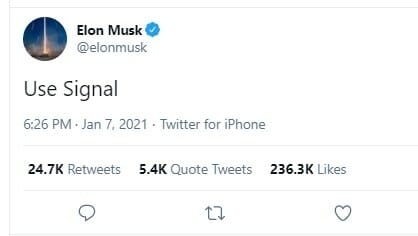 There is a good reason for it, but Musk was referring to a different organization altogether. That “Signal” is a not-for-profit outfit that provides a messaging service that competes with Facebook (NSDQ: FB). Apparently, Musk would prefer that his minions follow his sometimes bewildering musings on a platform unencumbered by intense regulatory scrutiny.

On January 11, Signal Advance issued a press release to alleviate the confusion. That caused SIGL to lose half of its value the next day, which was still considerably more than what it was trading for just a few days prior.

I don’t know exactly who bought millions of shares of SIGL this week, but I’m pretty sure they already regret it. Once the trading algorithms were done buying the stock it quickly plummeted in value.

In that respect, the sequence of events surrounding SIGL created an unintentional “pump and dump” scheme. That’s when promoters of a penny stock engage in questionable marketing practices to drive up the price of a cheap stock and then sell their shares to unwary buyers at inflated prices.

I’m not sure what, if anything, the U.S. Securities and Exchange Commission (SEC) can do about it. Presumably, Musk had no intention of driving up the share price of SIGL so he could sell shares of the company. His message was not fraudulent; it was simply misinterpreted.

I also would not blame company insiders for selling their shares of SIGL this week at inflated prices. They are not to blame for the mistaken interest in their company. If there are speculators willing to buy stock on nothing more than a two-word tweet then that is the risk they take.

Nevertheless, this episode illustrates one of the risks of algorithmic investing. An algorithm does not think; it only operates within the confines of a rigid set of instructions.

In this case, the algorithms got burned. Now, somebody owns millions of shares of a company that is all but worthless. Almost all of that will eventually be written off as the cost of doing business.

We’ve seen this same type of mistake made before. Three years ago, a company previously known as Long Island Iced Tea changed its name to Long Blockchain (OTC: LBCC) to cash in on the cryptocurrency craze. Bitcoin (BTC), and all cyber currencies, rely on blockchain technology to protect the value of their currencies.

Within days, Long Blockchain’s share price tripled in value as algorithms searching for blockchain stocks snapped up the stock. After spiking above $9 in December 2017, one year later LBCC was trading for fifteen cents. 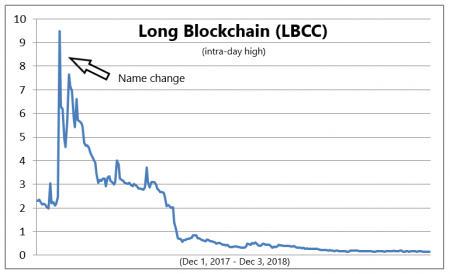 A Chip Off the Old Block

In this case, the correct stock was identified by the algorithms. However, the company in question had no blockchain technologies of its own to sell. The trading algorithms that bought the stock based on that news took a bath. Fortunately, it was a very small company to begin with so the amount of money at risk is relatively small.

But what if the mistake had been far larger? For example, over the past week shares of Indian automaker Tata Motors (NYSE: TTM) jumped 25% on rumors that Tesla may partner with Tata to build its electric vehicles for the Asian market.

If true, Tata deserves its higher share price. But if false, then more than $2 billion of investor capital may have just been wasted. Thus far, Musk has not confirmed or denied this rumor. But if he ends one of his tweets with “Tata for now,” don’t be surprised if TTM suddenly surges in value.

Trading on headline news is not a wise way to make money in the stock market. Instead, I suggest using a proven methodology based on logic and facts.

Which brings me to my colleague Jim Fink, the chief investment strategist of Velocity Trader.

Jim Fink has devised a scientific trading method that consistently outperforms, in markets that are going up, down or sideways. In a new presentation, he explains how you can turn $5,000 into $255,000 in the next 12 months.