How to Profit Under The New Majority

Inauguration Day on Wednesday will herald unified power in Washington DC, with the Democrats controlling the White House and both chambers of Congress. What does the new political majority mean for investors?

That profane bit of wisdom helps explain why stocks are shrugging off the Capitol riots, the persistent pandemic, and disappointing jobs reports. Majority rule in Washington will break political gridlock and pave the way for ambitious initiatives that will assist pandemic-afflicted individuals and businesses. The seeds will be planted for an economic boom, watered by loose monetary policy.

Now’s the time to rotate into cyclical, economically sensitive sectors, such as energy and infrastructure-related construction stocks. These assets also have the virtue of trading at bargain levels, after getting clobbered during the early stages of the pandemic.

The majority-wielding Democrats are all but certain to get massive fiscal stimulus passed, which is manna for Wall Street. Pump-priming policies were consistently stymied by Senate Majority Leader Mitch McConnell (R-KY), but McConnell will have to get accustomed to a new title: Minority Leader.

Wall Street isn’t necessarily pro-Democrat; right now it’s pro-stimulus. It’s a matter of pragmatism, not ideology. During the coronavirus crisis, financial and corporate leaders simply want Congress to do something.

Fueling the need for more fiscal stimulus are vaccine roll-outs that are falling short of goals, the emergence of a more virulent strain of the virus, a sputtering jobs market, and small business woes. However, unprecedented fiscal and monetary stimulus should help the economy turn the corner. In the coming weeks, we’re also likely to see improving vaccination rates and stronger public health policies.

Stocks finished in the red last week, after posting record highs in the previous week. But year to date, stocks continue to ride a post-election high. Crude oil prices also are higher so far this year, in anticipation of economic growth (see table). 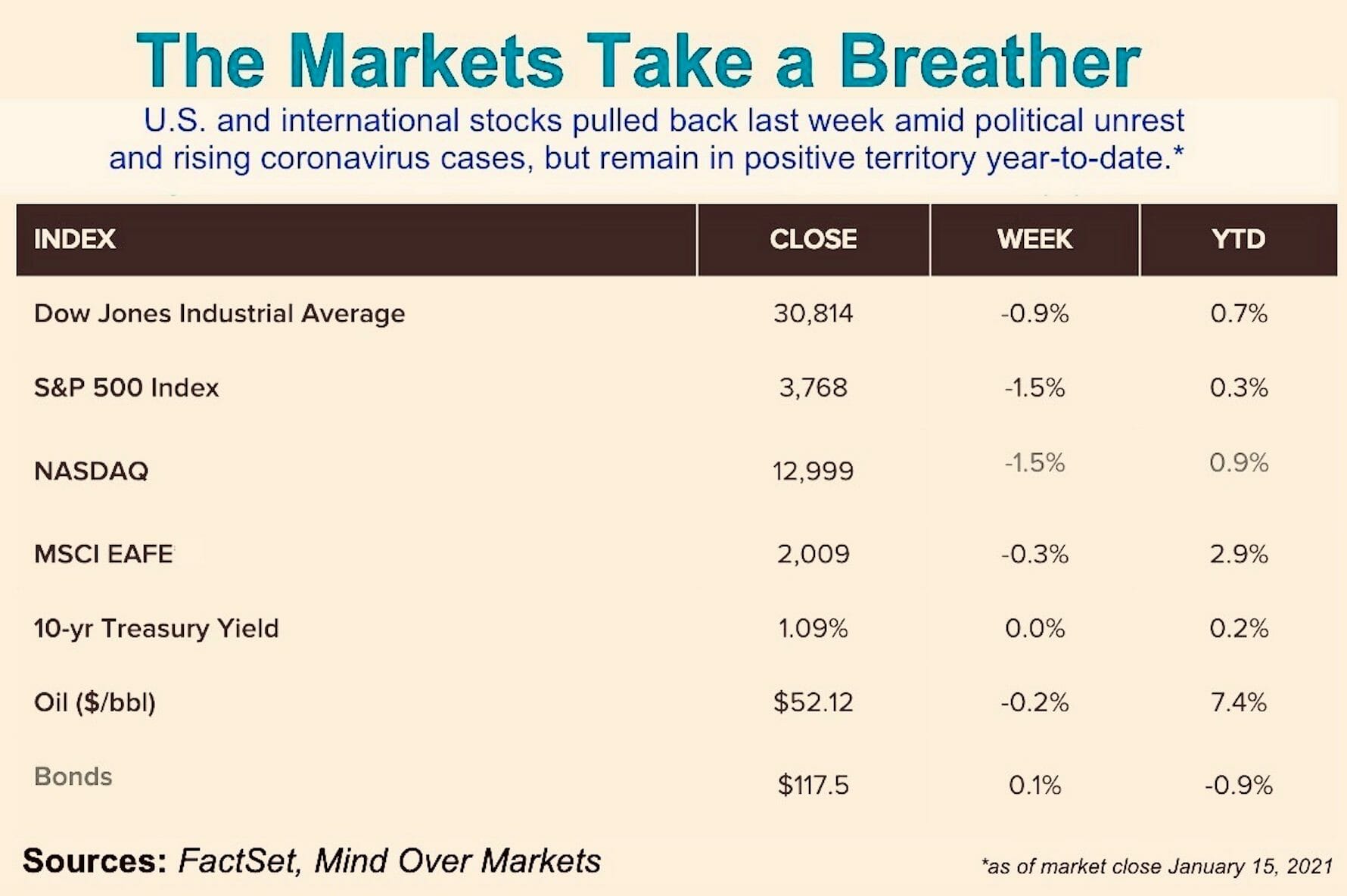 Monday was a national holiday and the markets were closed. In pre-market futures trading Tuesday, the three major U.S. stock market indices were all set to open sharply higher, as optimism grows about economic growth.

Over the holiday weekend, analysts at Goldman Sachs (NYSE: GS) released a note to clients that raised the bank’s forecast for U.S. gross domestic product growth from 6.4% to 6.6% in 2021, due to Biden’s stimulus plan.

Read This Story: Q4 Earnings: The Beat Goes On

We continue to face uncertainty and headwinds over the short term. But as always, keep your eye on the long term. History shows that in the wake of catastrophe comes rebirth. Monetary and fiscal stimulus will propel stocks higher.

Sectors that are benefiting during the pandemic, such as e-commerce, work-at-home technologies, renewable energy, and digital multimedia, will thrive even more in the post-COVID world.

Meanwhile, benchmark 10-year Treasury yields (which started the year below 1%) have since risen steadily. Driving bond yields higher have been rising inflation expectations, due to the probability of faster economic growth. The jobs market and economic recovery remain weak enough to keep inflation in check, for now. However, historic levels of stimulus could fuel a temporary surge in inflation later this year.

That’s why it’s prudent to increase your exposure to gold. The rule of thumb is to allocate about 10% of your portfolio toward gold. The yellow metal tends to outperform during periods of rising inflation. Gold also makes an excellent long-term investment, not just a short-term hedge. To learn the details about our favorite gold play, click here.