Use of cannabis is legal in New York State for medical purposes, whereas recreational use is not. That’s about to change, though, as New York Governor Andrew Cuomo (D) makes a big push for adult-use legalization. And if marijuana can make it there (as the song goes), it can make it anywhere.

Investors should view this political development in New York as an imminent profit catalyst for the entire marijuana industry. Marijuana stocks have been on a tear lately, as political trends become more favorable for Mary Jane. The pot stock crash of late 2019 is a distant memory.

The marijuana industry benchmark exchange-traded fund Horizons Marijuana Life Sciences Index ETF (HMMJ) year-to-date has gained 25.3%, compared to a gain of 1.1% for the SPDR S&P 500 ETF Trust (SPY), as of market close January 18. The momentum for pot stocks should continue in the coming months, as reflected by the impetus toward legalization in the bellwether state of New York. 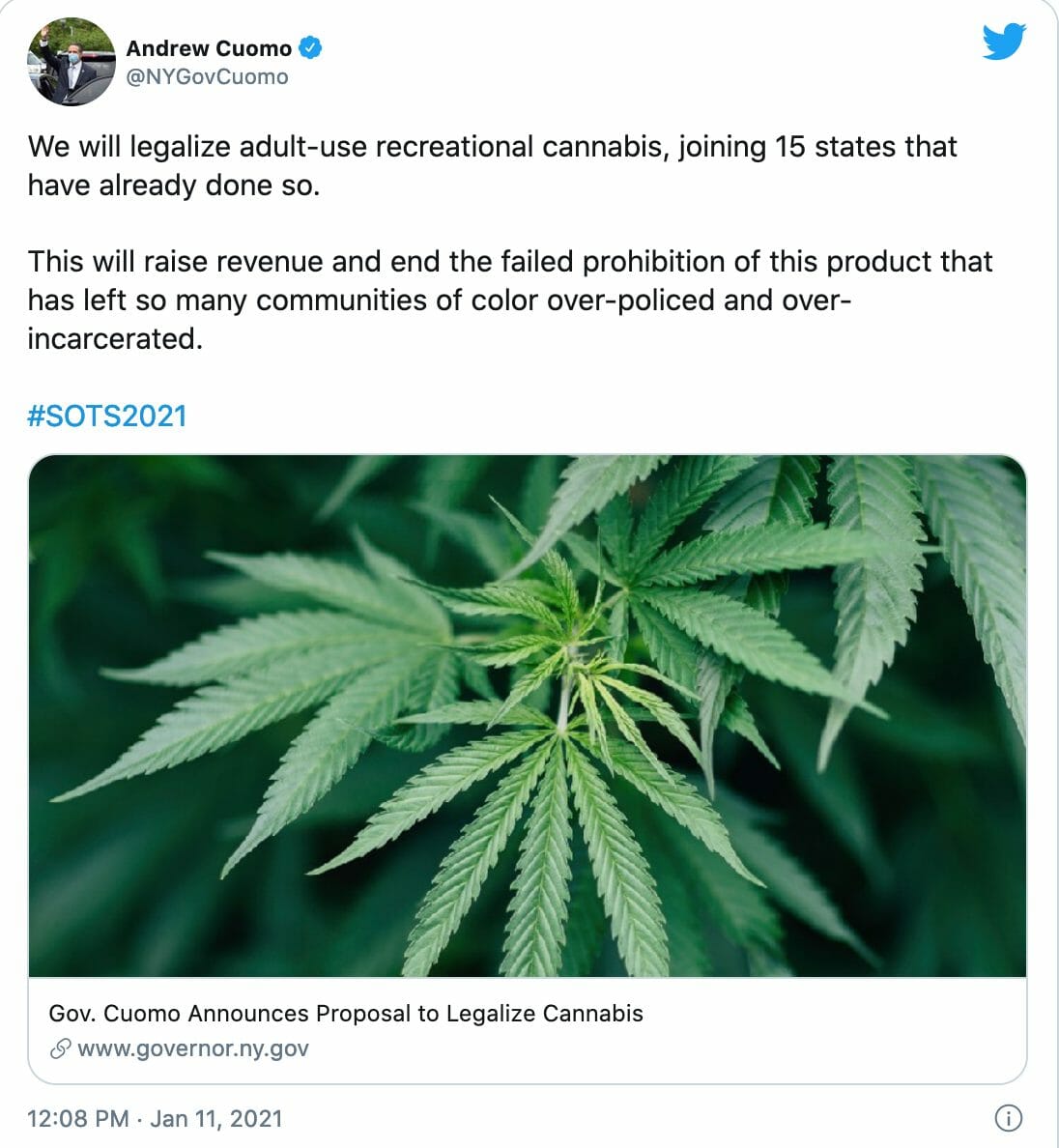 Gov. Cuomo’s proposal includes an effort to “correct past harms by investing in areas that have disproportionally been impacted by the war on drugs.”

The document goes on to assert: “Cannabis legalization will create more than 60,000 new jobs, spurring $3.5 billion in economic activity and generating an estimated $300 million in tax revenue when fully implemented.”

The governor’s full budget language, including his marijuana proposal, is scheduled for release on Tuesday, January 19.

Cuomo’s proposal would create an Office of Cannabis Management to regulate the state’s program, foster guidelines to encourage responsible marijuana consumption, and provide for “robust social and economic equity benefits to ensure New York’s law will create an egalitarian adult-use market structure that does not just facilitate market entry but ensures sustained market share for entrepreneurs in communities that have been most harmed by cannabis prohibition.”

Cuomo has called for marijuana legalization in his last two annual budget plans, but the efforts were stymied over details and the resistance of anti-marijuana Republicans.

However, state-level New York Democrats expanded their majorities in the November elections, which increases the odds that New York will finally legalize marijuana this year. Top leaders in the New York Assembly this week said they expect the legislature to legalize recreational cannabis this coming session.

There’s big marijuana money at stake in New York. According to Grandview Research, New York’s marijuana market could be worth $7.07 billion by 2025, up from $1.8 billion in 2018.

As the coronavirus pandemic undercuts state and local budgets throughout the country, political leaders are looking to marijuana legalization as a way to raise tax revenue. New York’s example is likely to spur other states to take similar actions.

A total of 36 states and the District of Columbia have approved comprehensive, publicly available medical marijuana programs. The recreational use of cannabis is legalized in 15 states, including DC. Another 16 states have decriminalized its use.

As state officials get addicted to the tax revenue from marijuana, they’re increasingly averse to any political backlash that could impede the industry. Socially conservative groups that seek to roll back marijuana legalization are forced to contend with politicians who relish the tax money from pot.

Several conservative red states have moved to legalize recreational pot, which makes it counter-intuitive that a liberal blue state such as New York would come late to the party. However, the state capital of Albany is governed by long-entrenched fiefdoms. Even an aggressive politician such as Andrew Cuomo has encountered difficulty getting his way, on several initiatives and not just marijuana legalization. But it now appears that forces are finally in alignment for the state to lift its remaining restrictions on pot.

The verge of history…

Meanwhile, the marijuana industry faces an historic moment on the federal level. The time for investors to act is now, before the big event occurs.

The Marijuana Opportunity Reinvestment and Expungement Act of 2019, aka the MORE Act, passed the U.S. House last month and now awaits action in the U.S. Senate. MORE is the “Holy Grail” for the marijuana industry, because it would finally decriminalize marijuana on the federal level.

MORE this year faces excellent odds of passage in a Senate that will be run by Sen. Chuck Schumer (D-NY), who strongly favors marijuana decriminalization. President-elect Joe Biden is fully on board.

Our team of analysts just uncovered a well-positioned pot company that would skyrocket after the Senate vote. Click here for details.