Get Ready for the Roaring 2020s

I often turn to history for context or, if needed, solace. Let’s set the Wayback Machine to the Spanish influenza, which lasted from 1918 to 1920 and infected 500 million people, which at the time was roughly a third of the world’s population. Globally the pandemic resulted in about 50 million deaths.

When the Spanish flu ended, pent-up consumer demand combined with revolutionary new technologies (the airplane, automobile, radio, etc.) produced the bull market, robust economic expansion, and liberating social changes of the Roaring Twenties. The stimulus of rebuilding after the destruction of World War I also played a role in fostering the decade-long prosperity of the 1920s.

Today, I suggest to you that we stand on the cusp of the Roaring 2020s.

During the coronavirus pandemic, households and businesses are prudently parking substantial cash on the sidelines. Once the pandemic is under control, I expect a boom in public, private and business spending that will drive equities higher. Digital innovations that are thriving during the work-at-home culture will soar to even greater prominence in the post-COVID world. 5G and the Internet of Things will revolutionize our lives, just as Marconi’s wireless did a century ago.

Of course, over the near-term you should brace for volatility. The coronavirus isn’t vanquished yet and we’ll still experience brief corrective sell-offs. Hedge your portfolio with proven safe havens (notably gold mining stocks). But as always, play the long game. Position your portfolio now, for the great American boom to come. Below, I’ll show you how.

Stocks opened sharply higher Thursday, with all three major U.S. indices in the green, as political optimism returned. I’m bullish over the long term, but volatility is here to stay.

Roiling the market has been the drama over consumer electronics retailer GameStop (NYSE: GME), which jumped 134.84% Wednesday. GameStop’s surge over the past week has come as individual retail traders, many of whom have revealed their trades on the social media site Reddit, have piled into the stock and call options.

Read This Story: The Rise of the Reddit Revolution

Since December, GameStop’s stock has risen by a whopping 1,700%. GME’s soaring share price has generated a stock “squeeze,” whereby short sellers and options dealers are compelled to buy shares of a rising stock to cover their positions, which in turn drives the stock even higher. The aim of the investors who went long on GameStop was to act in concert like guerilla fighters to punish the institutional short sellers (and make some money while they did so).

The Wall Street establishment is discovering the power of Internet trolls. On the Reddit forum WallStreetBets, an insurrectionist GameStop investor recently posted the following statement: “You guys are making such an impact that these fat cats are worried that they have to get up and put in work to earn a living.”

Don’t get distracted by these colorful sideshows. Stay focused on the fundamentals, such as earnings results. For fourth quarter 2020, more S&P 500 companies are beating earnings per share (EPS) estimates than average, and beating EPS estimates by a wider margin than average, according to research firm FactSet.

In aggregate, companies so far for Q4 are reporting earnings that are 22.4% above expectations. This surprise percentage is above the 1-year (+11.9%) average and above the 5-year (+6.3%) average. The industrials sector (+33.4%) is reporting the largest positive aggregate difference between actual earnings and estimated earnings.

Loose monetary policy is helping the corporate bottom line. The Federal Reserve made it clear Wednesday that it would keep its ultra-dovish stance in place, as the U.S. central bank assesses an economy still struggling through the coronavirus pandemic.

The number one Biden theme…

If I had to pick one overriding investment theme for the Biden presidency, it would be infrastructure. Worldwide, capital project and infrastructure spending is expected to total more than $9 trillion by 2025, up from $4 trillion in 2012 (see chart), according to a report by Oxford Economics. 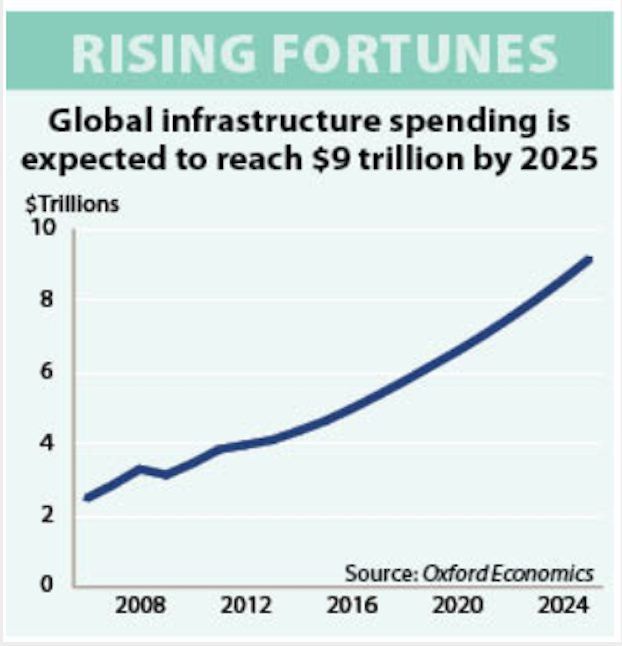 The White House proposes massive spending on infrastructure projects. With the Democrats in control of the presidency and both chambers of Congress, we’re likely to see much-needed spending on public works. This spending will create new opportunities for investment profits in the following segments (data from Oxford Economics):

Electricity: From 2010 to 2040, global electricity demand is projected to increase 85% as living standards rise and economies expand, especially in emerging countries.

Natural Gas: Global demand for “clean” natural gas is projected to rise 65% from 2010 to 2040, the largest volume growth of any energy source.

Water: By 2030, global water needs will grow 40%. Societies are increasingly bedeviled by a water crisis, spawned by climate change, worsening pollution, and overpopulation.

Looking for momentum stocks that will thrive during the Roaring 2020s? Consider our new report: “5 Red Hot Stocks to Own in 2021.” In this report, we provide the names and ticker symbols of high-quality, rock-solid growth stocks to own for the new year and beyond. Click here for your copy.