GameStop Adds Fuel to the Fire

With so much attention being paid to the GameStop (NYSE: GME) controversy, it’s easy to overlook some of the other compelling stories playing out on Wall Street recently (if you are unfamiliar with what is happening with GameStop, read this article from last week).

One development I am watching closely is the price of oil. That’s because it is viewed as a harbinger of the global economy. As more people go back to work and do more traveling, demand for gasoline and aviation fuel should increase. According to the U.S. Energy Information Administration (EIA), the primary use of crude oil in the United States is for transportation. 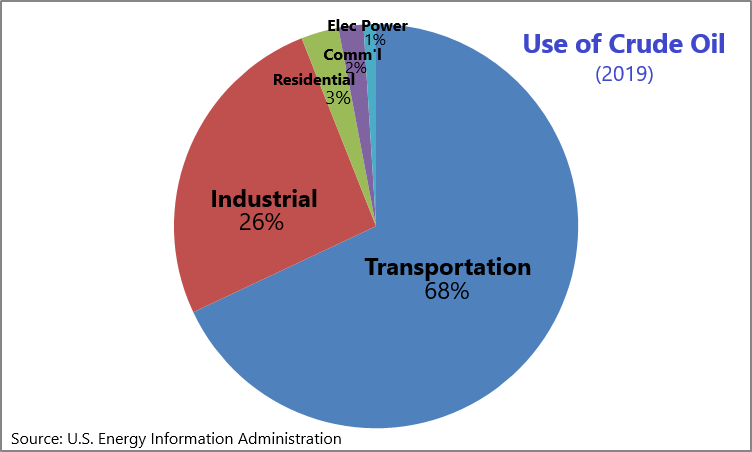 At the start of this year, a barrel of crude oil was selling for around $48. Two weeks later, it jumped above $53 and has stayed there since. Coincidentally, that is exactly where it was trading one year ago before the coronavirus pandemic sent the global economy into a tailspin.

That one data point suggests that the global economy will fully reopen this year. If commodity traders feared that another shutdown would occur, the futures price of crude oil would plummet as it did last April when it temporarily went negative.

However, it appears that the equity managers on Wall Street are beginning to think that the economic reopening may take longer than expected. During the past two weeks, the share prices of “supermajor” oil producers Chevron (NYSE: CVX), Royal Dutch Shell (NYSE: RDS.A), and ExxonMobil (NYSE: XOM) each receded 10% while the overall stock market moved sideways.

For obvious reasons, higher oil prices are good for oil producers. The cost of extracting raw petroleum from the ground is fixed. However, the price at which crude oil can be sold to refiners is variable.

Nothing has changed over the past few weeks to suddenly alter the outlook for oil producers. As the price of oil rises, the share prices of the biggest oil producers should also be going up, not down. So what gives?

The problem is earnings. All of the big oil companies took on a lot of debt last year to survive the crisis. Even at relatively low interest rates, servicing that debt will cut into profits. They also cut back on CapEx (capital expenditure) spending to reduce costs. That means they will have less oil to sell which will put a lid on top-line revenue.

Somewhat perversely, the primary beneficiaries of oil’s recent price increase are the least profitable producers that were given up for dead last year. A case in point is Transocean (NYSE: RIG), which is headquartered in Switzerland and specializes in extracting petroleum from some of the harshest environments on the planet.

I highlighted Transocean in an article three weeks ago after its share price tripled in value in less than a month. Last week, it tacked on another 30% in a single day! 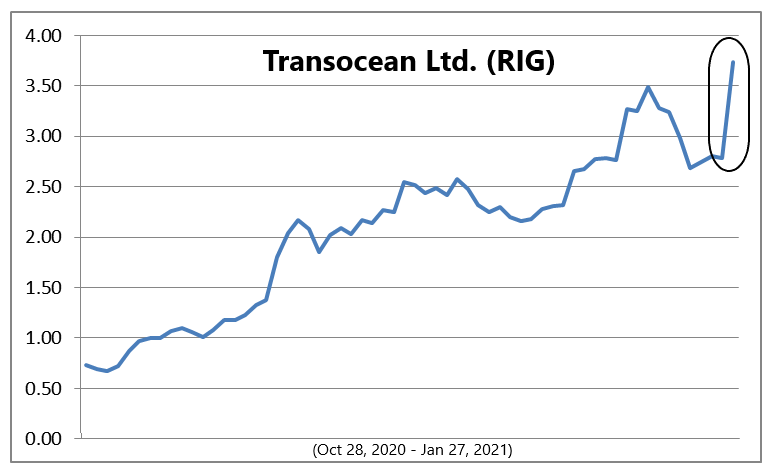 Despite its recent surge in value, RIG is still well below where it was trading a few years ago. That’s because it can’t make money unless oil prices are above $60 a barrel.

Transocean is not profitable and has not been for the past couple of years. It has a profit margin of negative 17%, a negative return on equity, and its revenue is shrinking.

On paper, Transocean appears to be a little company in big trouble. Barring a sudden spike in oil prices it will remain unprofitable this year, too.

Despite those shortcomings, someone is buying a lot of the stock. On January 27, more than 140 million shares of RIG changed hands. That is more than five times its average daily trading volume of 27 million shares.

This is where our story comes full circle. The same dynamic that has propelled GameStop and a handful of other troubled companies higher could be at work with Transocean.

Read This Story: Casino Capitalism: How to Play to Win

What Transocean has in its favor at the moment is that it is a small-cap stock with high short interest. That means it is a viable candidate for a “short squeeze”, which occurs when short sellers must buy the stock to meet margin calls on their positions. That is what propelled GameStop into the stratosphere last week.

The approach used to drive up the share price of GameStop can be easily replicated with other companies. If that is what is happening with RIG, then it could rise considerably higher in the weeks to come.

That may explain why the call options on RIG are trading at a very high “implied volatility,” which reflects how much potential price change there may be in a stock over the life of the option. If RIG jumps in value, some of those call options could easily double or triple in price.

Of course, there is considerable risk in speculating on nearly bankrupt companies. Eventually, some of them go under leaving worthless stock (and options) in their wake. It is easy to identify the companies that are vulnerable to a short squeeze. However, it is considerably more difficult to figure out which ones won’t go bankrupt and leave a lot of investors owning worthless stock.

If you’re looking for rock-solid stocks without the speculative risk, I suggest you take a look at our new report: “5 Red Hot Stocks to Own in 2021.” In this report, we provide the names and ticker symbols of high-quality growth stocks that are poised to soar this year. Click here for your copy.