VIDEO: GameStop and the Investor Insurrection

Welcome to my video presentation for Monday, February 1. For greater details, read my article below.

The battle between amateur investors and giant hedge funds over GameStop (NYSE: GME) also weighed on the markets, as investors feared that speculation in risk-on assets was running rampant.

Q&A: Has The Stock Market Reached a Top?

When hordes of neophyte investors are treating the stock market like a Las Vegas casino, it’s often a sign of a market peak. The market’s gyrations lately have been disconnected from underlying fundamentals.

The GameStop tug-of-war has generated market imbalances that could trigger a financial contagion. Stocks last week pulled back from their lofty and unsustainable heights (see table). 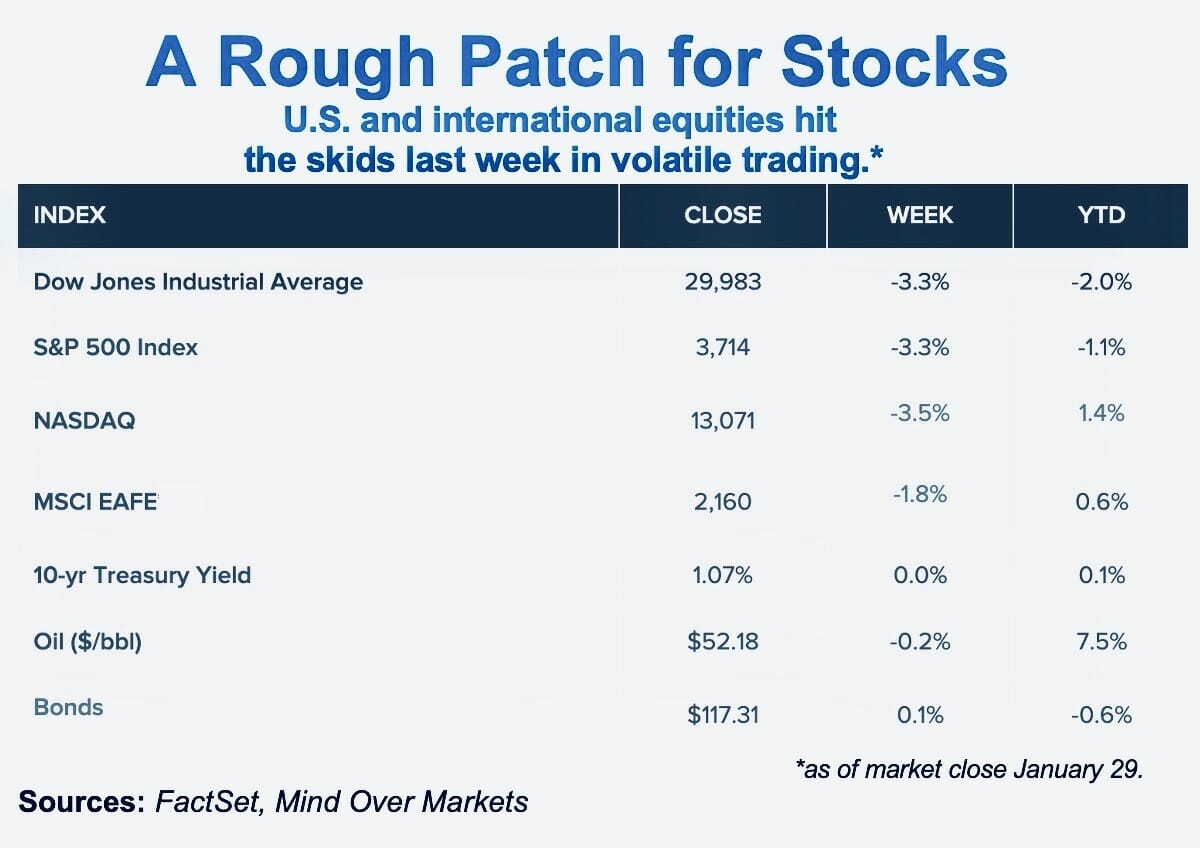 Last week’s negative performance in equities doesn’t necessarily herald a prolonged market downturn. As of this writing Monday morning, stock futures were trading sharply higher. However, recent events do indicate that we’re facing a period of volatility and caution is warranted.

Unless you live in a cave, you’re familiar with the high-stakes scuffle over video game retailer GameStop. The company has become a household name, but not for positive reasons that have anything to do with its actual business model. In fact, as a bricks-and-mortar retailer of obsolete physical products, GameStop is a dying business whose woes have been exacerbated by the pandemic.

GameStop’s sales have been sliding, along with many other retail dinosaurs. The company’s management has been making heroic but probably doomed efforts to turn around the company. Hedge fund short sellers were, quite logically, betting against the company’s chances.

However, users on the Reddit channel WallStreetBets in recent days noted that GameStop’s stock was heavily-shorted and decided to scoop up shares to drive up the price and force the hand of short-sellers. The Reddit revolutionaries wanted to punish the pessimists, partly out of anti-establishment spite and partly (of course) out of greed.

Social media chatter quickly spread and GameStop’s stock exploded on the upside, rising high enough to force the huge hedge funds to jettison their positions and lose billions of dollars.

By Wednesday, January 27, GME had gained more than 700% over the course of four trading days, a success that motivated the insurgents to target other heavily-shorted stocks such as theater operator AMC (NYSE: AMC).

On Thursday, online brokers used by retail investors blocked trading of the targeted stocks, allowing users only to sell their shares of GameStop and other “meme” stocks, all of which subsequently tumbled. The following chart shows the recent roller-coaster action of GameStop: 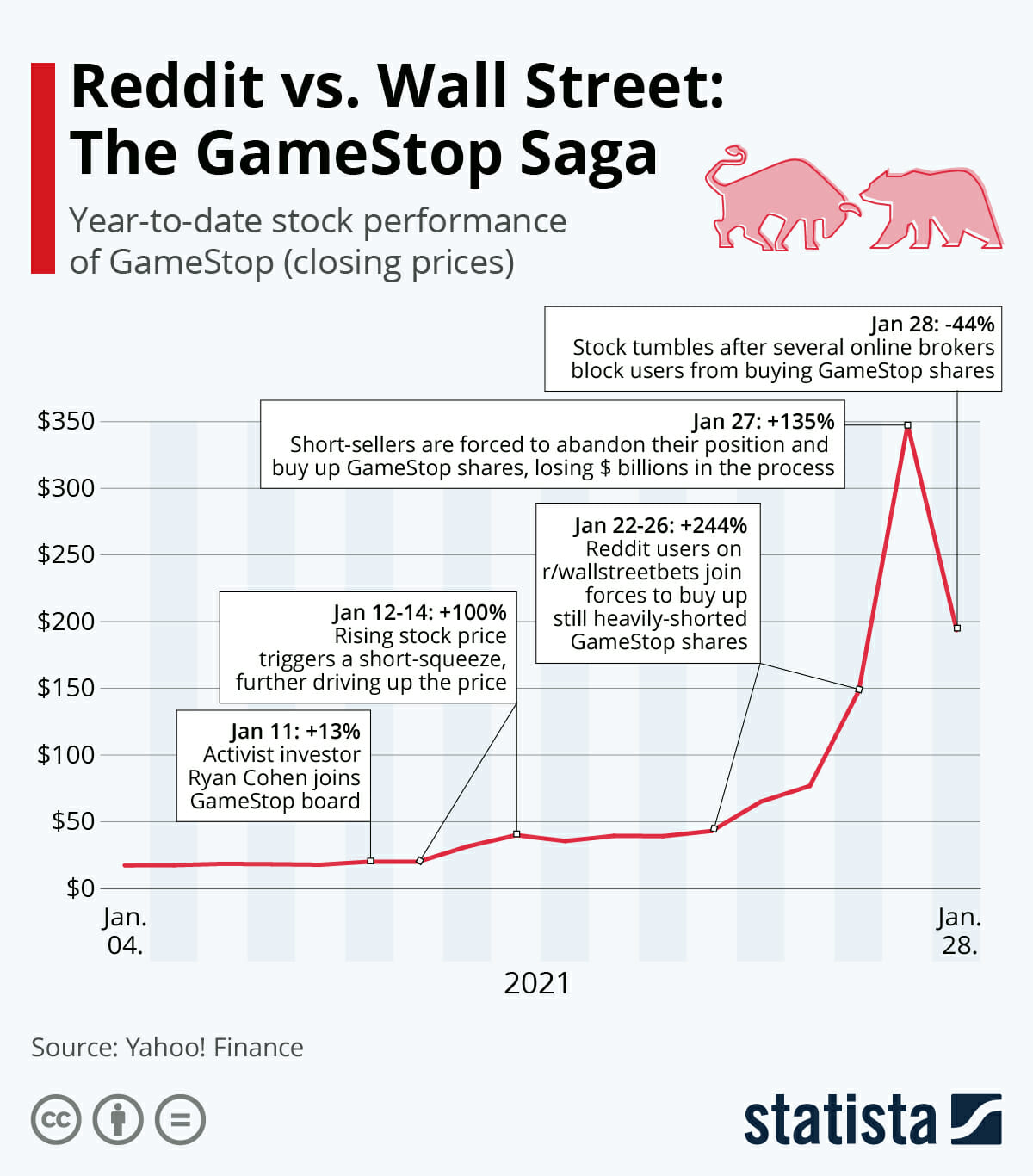 After angry complaints from the public and lawmakers, several brokers (notably Robinhood) rescinded their decision to limit trading. The GameStop rally reignited Friday, with the stock soaring nearly 70% for the day.

A punch in the nose…

The scheme’s originator on Reddit claims to have turned an initial investment of $50,000 into more than $40 million. Melvin Capital, among the hedge funds that had shorted GameStop’s stock, was forced to beg for a $2.75 billion bailout from two other investors after it was clobbered with huge losses because of the “short squeeze.”

Melvin Capital has suffered the worst from the skyrocketing prices of heavily shorted stocks, losing 53% on its investments in January. One WallStreetBets user gleefully posted on Sunday: “Only 47% left to go!!”

It’s unclear how this David vs. Goliath story will ultimately pan out. One thing is clear, though: Reddit’s online rebels exposed the lack of fairness in a financial system dominated by the “big boys” on Wall Street. The billionaires got bloody noses and their pain has touched off widespread Schadenfreude.

With the Democrats in charge of the White House and both chambers of Congress, we might see new regulations come out of the GameStop saga. The U.S. House Committee on Financial Services announced Wednesday that it would hold hearings into the matter.

The pitchfork-wielding investors on Reddit perhaps set in motion lasting changes to institutional investing that would prevent brokers from treating rich clients differently from the little guy.

A long way to go…

On the economic front, investors are increasingly worried that the recovery might be losing steam. Federal Reserve Chair Jerome Powell on Wednesday cautioned that the U.S. economy is still “a long way from a full recovery.”

The U.S. central bank vowed to use “its full range of tools to support the U.S. economy in this challenging time.” The Fed’s warning, combined with disappointing economic data and the persistence of the pandemic, contributed to the pessimism last week on Wall Street.

The U.S. Bureau of Economic Analysis reported on Thursday that U.S. real gross domestic product (GDP) growth increased at an annual rate of 4% in the fourth quarter, down from 33.4% in the third quarter. For the full year, real GDP decreased by 3.5% compared to 2019, representing the sharpest annual decline since 1946 (see chart). 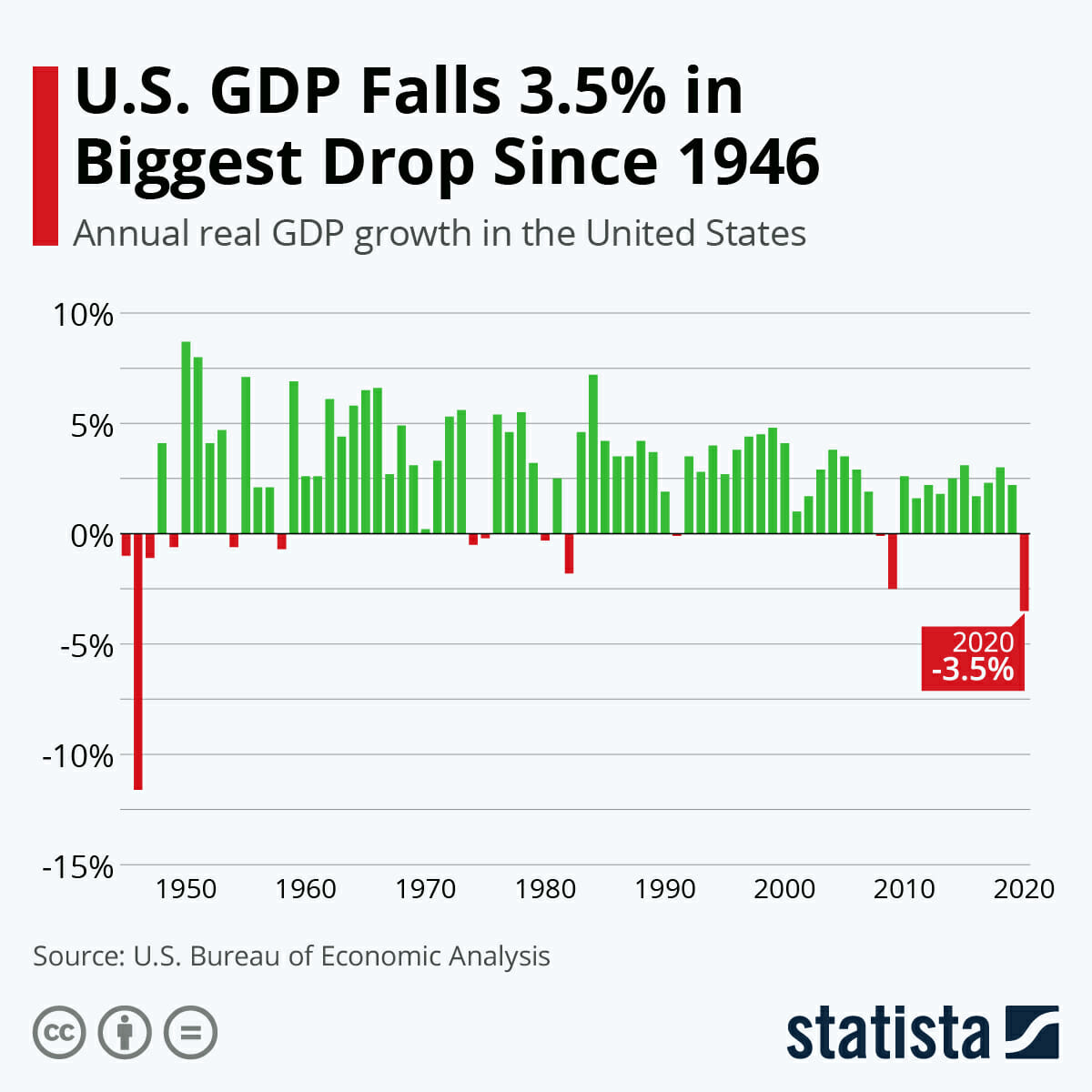 The pandemic-battered economy still struggles, underscoring the need for another round of fiscal stimulus.

Senate Majority Leader Chuck Schumer (D-NY) has made it clear that Democrats have sufficient votes to pass President Biden’s proposed $1.9 trillion stimulus package, with or without Republican support. Passage of the coronavirus relief bill would provide a catalyst for another upward leg in the stock market. Cyclical, economically sensitive stocks should benefit the most.

Meanwhile, Donald Trump’s impeachment trial in the Senate is scheduled to begin on the week of February 8. Here’s my take: Wall Street couldn’t care less. From an historical and political perspective, the impeachment trial of our ex-president is significant. But for the financial markets, it’s a non-event.

If you’d rather focus on making money, I suggest you take a look at our new report: “5 Red Hot Stocks to Own in 2021.” In this report, we provide the names and ticker symbols of high-quality, rock-solid growth stocks that are poised to soar this year. These stocks should thrive in the conditions that I describe in my article above. Click here for your copy.