VIDEO: The Raw Materials of Wealth

U.S. stocks last week racked up their best weekly gain since November, with the three major indices closing at new all-time highs. Hopes for fiscal stimulus and widening vaccine distribution continued to justify bullish sentiment. As I explain below, conditions are favorable for commodities.

Key sectors such as housing and manufacturing are performing strongly, while stimulus should encourage consumer spending.

Optimism over the economy helped push crude oil prices to their highest levels in more than a year, for a nearly 10% gain for the week (see table). 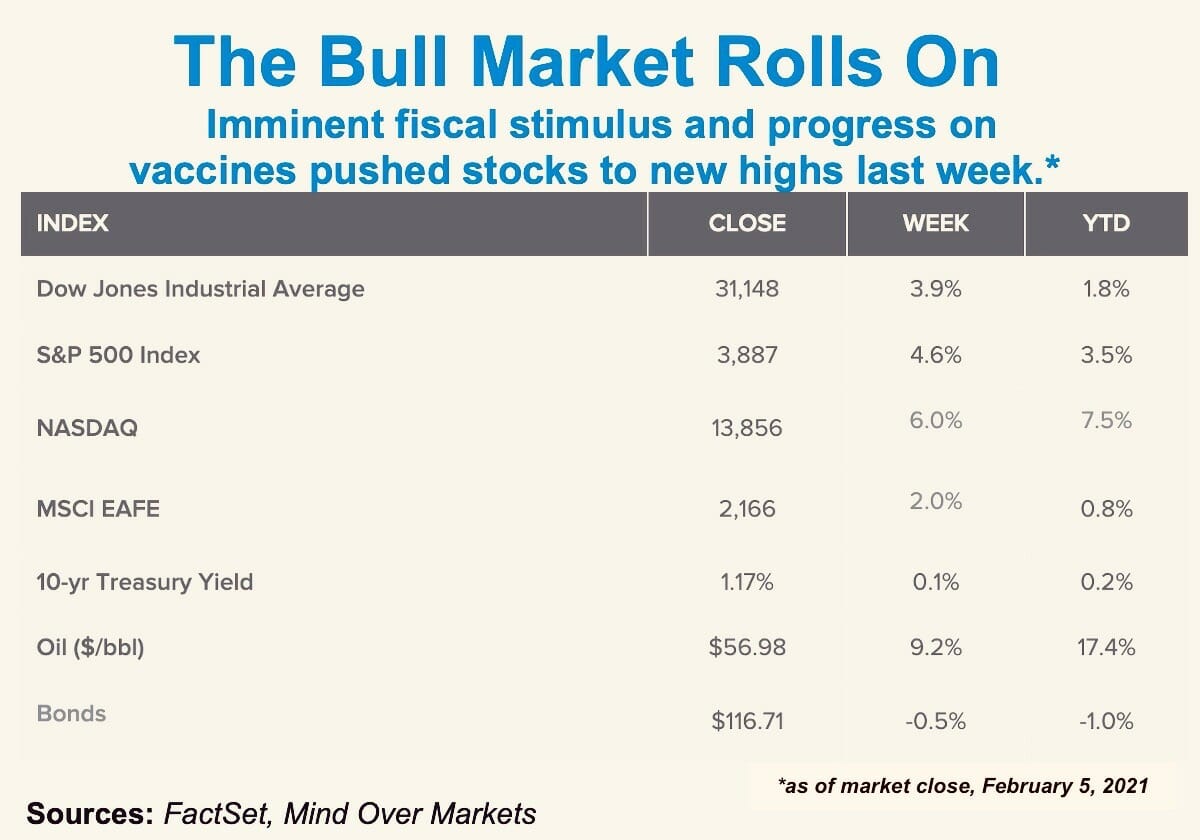 The employment situation has been trending in the right direction, but jobs growth remains fragile.

However, the government’s Friday jobs report disappointed, with the U.S. economy adding only 49,000 jobs last month, according to the Bureau of Labor Statistics. The number fell far below the 105,000 expected. The unemployment rate dipped by 0.4 percentage point to 6.3% in January, a welcome but only slight improvement (see chart). 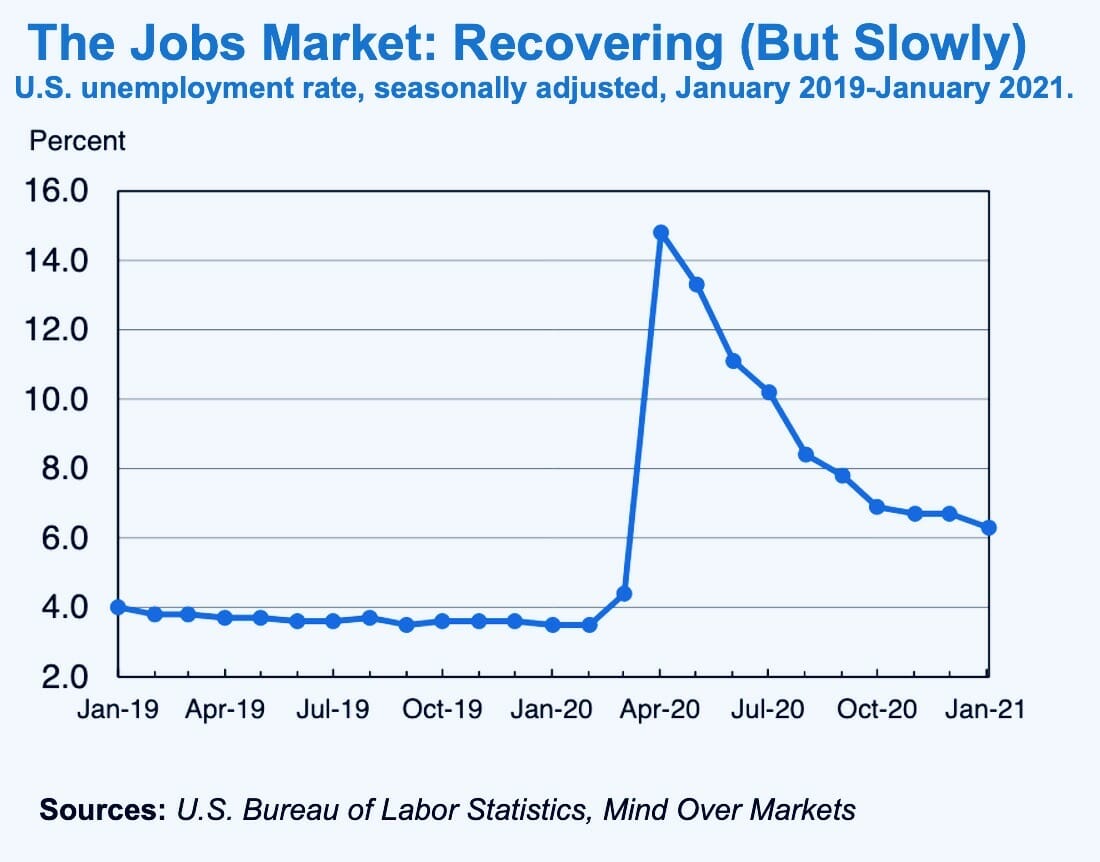 But in a positive sign, initial jobless claims, a timelier gauge of labor market trends, fell for the third consecutive week. The U.S. government reported Thursday that initial jobless claims for the week ended January 30 came in at 779,000 versus 830,000 expected and a revised 812,000 during the previous week.

What’s more, we’re starting to see light at the end of the COVID-19 tunnel. As of this writing Monday, new U.S. COVID-19 cases have declined by 61% compared to the peak level on January 8, according to Johns Hopkins.

In a report released February 2, the U.S. Geological Survey (USGS) showed that U.S. mines produced $82.3 billion worth of minerals in 2020, a reduction on the $83.7 billion extracted the year before.

However, in the context of the sharp economic downturn caused by the coronavirus pandemic, the 2020 mining level is actually encouraging and bodes well for 2021 when the recovery is expected to pick up steam.

The estimated value of metals production rose 3% to $27.7 billion, largely as a result of price increases for precious metals. Notably, gold reached a record-high price of $2,060 per troy ounce last August. Gold (38%), copper (27%), iron ore (15%) and zinc (6%) were the primary contributors to the total production value of U.S. metal in 2020. 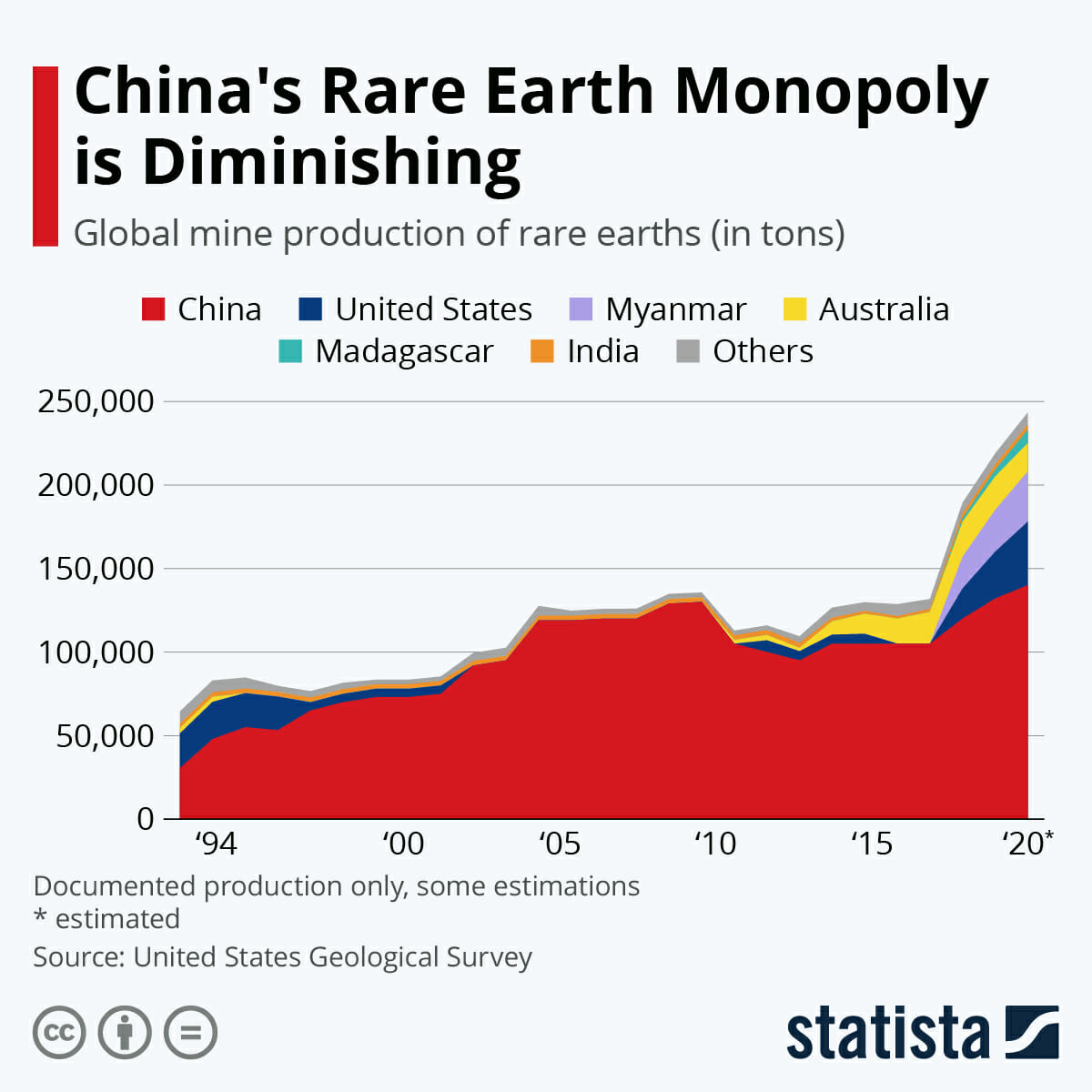 During the Sino-America trade war under the Trump administration, China threatened to curtail its exports of rare earth metals that are vital for products in key industries, such as aerospace, high technology, automobiles, and energy.

Read This Story: Biden’s New Global Stance and Your Portfolio

Regardless, China’s threat increasingly rings hollow. As the latest numbers show, America is no longer overly reliant on China for rare earth minerals.

According to the USGS report, industrial mineral production in 2020 totaled $54.6 billion, of which $27 billion was construction aggregates production such as sand, gravel and crushed stone.

President Biden’s $1.9 trillion fiscal stimulus package is likely to become law, which would give a shot in the arm to the recovery. Biden also promises massive expenditures on infrastructure.

The coming surge in commodities prices…

It adds up to a coming boom in commodities. It makes sense for investors right how to increase exposure to commodities. The world will soon be clamoring for vital raw materials, such as copper, zinc, lithium, and rare earth minerals. When economic growth accelerates in 2021, these commodities (especially economically sensitive copper) should soar in price.

In particular, make sure your portfolio contains gold. The persistent pandemic has propelled the price of gold in recent months. Gold probably has further to run, especially as inflation rears its head this year as expected.

The rule of thumb is for a portfolio allocation of 5%-10% in either gold mining stocks, exchange-traded funds (ETFs), or the physical bullion itself. I prefer gold miners, which offer exponential gains because of corporate operating leverage. To learn about our favorite gold mining stock, click here for details.

Stimulus and a concomitant return to economic growth in 2021 also would be favorable for copper demand. The price of copper is poised to soar this year and beyond, which is great news for copper producers.

The industrial world can’t function without the “red metal.” Copper is vital for building construction, power generation and transmission, electronics, industrial machinery, and transportation vehicles. Copper wiring and plumbing are mainstays of heating and cooling systems, appliances, and telecommunications links.

This year, as the world economy resumes growth and infrastructure spending explodes, so will demand for copper. For our favorite investment play on this crucial commodity, click here now.