Getting a BAANG Out of the Stock Market

Thanks in large part to the performance of those companies, the stock market is at an all-time high. At the start of this week, the S&P 500 Index traded above 3,900 for the first time ever. The tech-heavy NASDAQ Composite Index has doubled in value since bottoming out last March.

Despite the strong performance of large-cap stocks over the past year, it is a handful of small-cap stocks that have been getting a lot of attention lately. So much so, they have been assigned the moniker of “BAANG” by the mainstream financial media.

The five BAANG companies are BlackBerry (NYSE: BB), AMC Entertainment (NYSE: AMC), American Airlines (NSDQ: AAL), Nokia (NYSE: NOK), and GameStop (NYSE: GME). Recently, each of these stocks spiked unexpectedly. The reason for their sudden popularity is both surprising and disturbing. More about that in a moment.

Last month, shares of GameStop surged over twenty times in value in just two weeks. At the same time, BlackBerry more than tripled in value while AMC jumped by 400%. Nokia appreciated 50% and American Airlines ran up more than a third in value.

In all those cases, a “short squeeze” was the reason for their sudden share price hikes. A short squeeze occurs when speculators that have sold shares short in a company must buy them back at inflated prices in response to margin calls.

Putting the Squeeze On

The FAANG stocks are all trading at very high multiples to their sales and earnings. However, their revenue and profits are growing rapidly so higher multiples are warranted. The coronavirus pandemic has greatly increased demand for their products and services.

Conversely, the BAANG stocks are all in precarious financial shape. For a variety of reasons, each one of them has suffered either declining revenues or shrinking market share in recent years. From a fundamental perspective, there is no good reason for their share prices to go up.

As a result, the number of shares sold short increased to the point that they were vulnerable to a short squeeze. If enough investors buy a lot of shares of one of those stocks at the same time, that can briefly drive up the share price due to an imbalance of bid (buy) and ask (sell) orders.

If the price goes a lot higher, the short-sellers could get a margin call from their brokers. At that point, they either have to buy the stock back or cough up more cash.

If they buy the stock to cover their short positions, their loss is limited to the cost of purchasing those shares. Or, they can keep those short positions open by depositing more cash into their accounts. In that case, there is no limit to the size of the potential loss.

That is the dilemma that many hedge funds have had to confront during the past month. And given the short-term success of the BAANG short squeeze strategy, they should be prepared to deal with it again in the months to come.

The simultaneous popularity of the FAANG and BAANG stocks creates the ultimate two-tier market. At one end of the spectrum are some of the biggest and most profitable companies in the world. At the other end are much smaller businesses that appear to be on the verge of collapse.

The fact that both strategies are thriving at the same time should be cause for concern. The only attribute they share is the assumption that someone else will be left holding the bag when those stocks eventually lose momentum and come crashing back down to earth.

Two weeks ago, GameStop crossed above the $300 threshold. At that time, giddy shareholders vowed they would not sell their stock until GME made it to $1,000. It looks like they may be in for a long wait. At the start of this week, GME was back below $60. 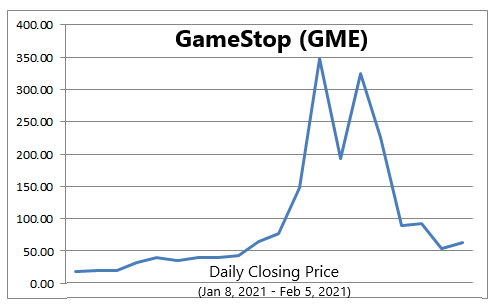 Likewise, AMC has fallen from $20 to $6, BB dropped from $28 to $14, and NOK has lost more than half its value. Only AAL has managed to avoid a big decline, but it never ran up that far in the first place.

My guess is the BAANG phenomena will soon run out of gas. It worked once as an ambush trade. But now that everyone knows about it, nobody should be caught off-guard by it again.

Editor’s Note: Our colleague Jim Pearce just described market imbalances that could threaten your portfolio. That’s why our investment team has put together a special report: “5 Red Hot Stocks to Own in 2021.” In this report, we provide the names and ticker symbols of solid stocks to own for the new year. These high-quality stocks are appropriate for any type of investor. Click here for your copy.