Your Biggest Investment Risk: Fear Itself

I’m often dismayed by how easily investors are sidetracked by irrational fears. Recent emails to me from readers have expressed anxiety about Joe Biden’s election (he’s a commie-lib!), Donald Trump’s second impeachment trial (it will spook the markets!), or the Federal Reserve’s dovishness (we’ll get hyperinflation!). Might as well add killer asteroids to the list.

Here’s the reality. Biden’s policies are establishmentarian (which is to say, capitalist and investor-friendly). This week’s impeachment trial of ex-President Trump is significant for historical posterity but it means nothing…zip, zilch nada…to Wall Street. And there’s so much pandemic-induced slack right now in the economy, the U.S. central bank is purposely (and wisely) trying to stoke a modicum of inflation to get the growth engine humming.

Put aside unreasoning fear and focus instead on hard data. And on that score, there’s ample good news that justifies a further run-up in stocks.

If 81% turns out to be the final percentage, it will tie the mark for the second-highest percentage of S&P 500 companies reporting a positive EPS surprise since FactSet began tracking this metric in 2008.

Climbing the wall of worry…

During the Q4 earnings season, more companies have beaten EPS estimates than average and by a wider margin than average. Wall Street has worried about corporate earnings because of the pandemic, but as surprisingly strong results are posted, investors have climbed this wall of worry.

If +1.7% turns out to be the actual growth rate for the quarter, it will mark the first quarter in which the index has reported a year-over-year earnings growth since Q4 2019. On December 31, the estimated earnings decline for Q4 2020 was -9.3%.

As Trump’s impeachment trial got underway in the Senate on Tuesday, the main U.S. stock market indices closed essentially flat. The Dow Jones Industrial Average fell 9.97 points (-0.03%), the S&P 500 slipped 4.36 points (-0.11%), and the tech-heavy NASDAQ rose 20.06 points (+0.14%) to reach a new high. In pre-market futures trading Wednesday, all three indices were in the green.

Since the depths of pandemic-induced economic damage last year, we’ve witnessed substantial improvement. In April 2020, the U.S. reached the highest level of unemployment since the Great Depression. Since then, the unemployment rate has steadily declined. However, we still haven’t achieved pre-pandemic normalcy.

Certain types of jobs (especially in technology) have bounced back, whereas low-skilled jobs have not. We’re in the midst of a “K-shaped” economic recovery, characterized by winners and losers in the new paradigm forged by COVID-19.

Read This Story: The K-Shaped Recovery: How to Invest

As of January 2021, the unemployment rate is still 2.8 percentage points higher than it was before the COVID-19 outbreak (see chart). 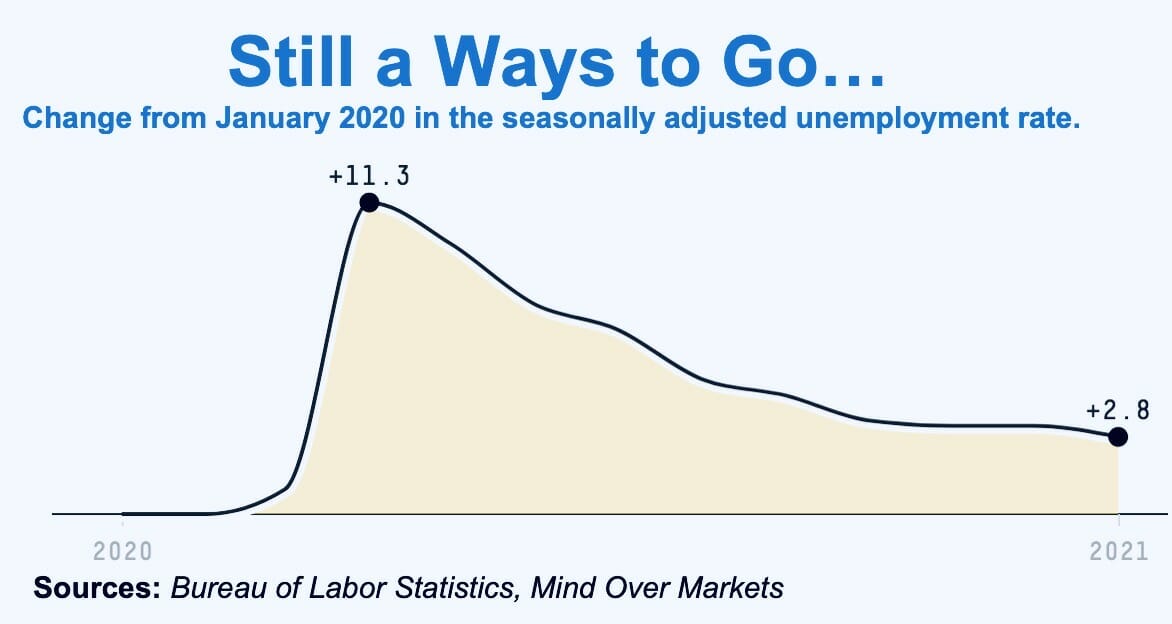 According to the Bureau of Labor Statistics, the unemployment rate dipped by 0.4 percentage point to 6.3% in January, an (albeit anemic) improvement.

But we have the wind at our backs. Since the end of the second quarter of 2020, many of the pandemic-fighting measures that impeded economic activity have been lifted to varying degrees around the world and throughout the U.S. Accordingly, we’ve enjoyed a rebound in economic activity in recent months.

Notably, the latest government data show that U.S. gross domestic product (GDP) grew by 4.0% (seasonally adjusted annual rate) in the last quarter of 2020 compared to the previous quarter. That puts the U.S. economy above the “ideal” growth rate of between 2% and 3%. Economists consider the ideal rate robust enough to generate sufficient jobs, but not so fast it fosters inflation or an asset bubble.

Nearly three-fourths of U.S. GDP is consumer spending and on that front there’s reason for optimism. Retail sales data show that by the end of 2020, consumers had continued their previous spending patterns despite the pandemic.

How should you invest now? With stronger economic recovery on the horizon, our investment team decided it was time to pinpoint the best growth stocks available. That’s why we put together a new report: “5 Red Hot Stocks to Own in 2021.”

In this report, we provide the names and ticker symbols of high-quality, rock-solid growth stocks that are poised to soar this year. These stocks should thrive in the conditions that I describe above. Click here for your copy.