Wall Street is perpetually preoccupied with the antics of Elon Musk, eccentric founder and CEO of electric vehicle (EV) maker Tesla (NSDQ: TSLA). Musk is currently worth about $183 billion, which makes him the wealthiest person on the planet. That distinction earns you a lot of media coverage.

The financial media love to fawn over celebrity CEOs. Accordingly, Musk’s latest moves concerning cryptocurrency are generating considerable buzz. Let’s dig beneath the hype and see what it means for individual investors.

In a Securities and Exchange Commission annual report filing February 8, Tesla announced that it had bought $1.5 billion worth of Bitcoin (BTC). The company also said that it would start accepting Bitcoin as a payment method for its products, to achieve “more flexibility to further diversify and maximize returns on our cash.” Tesla is the first automaker to accept cryptocurrency. The announcement drove a 20% surge in Bitcoin, the world’s original and most widely held cryptocurrency.

Musk’s tweets in recent months have boosted the prices of cryptocurrencies. Two weeks ago, Musk added the hashtag #bitcoin to his Twitter bio.

Bitcoin has soared in value by about 53% year to date and currently hovers at about $44,920 per token. That means a single Bitcoin is more than enough to buy a Tesla EV.

President Biden’s $1.9 trillion coronavirus relief package is nearly assured of enactment during the first quarter of 2021. At the same time, the Federal Reserve has vowed to maintain an ultra-dovish monetary policy throughout 2021 and, if necessary, beyond. These measures will fuel economic growth and in turn inflation. Demand for inflation hedges, especially “alternative investments,” has been increasing.

During past inflationary periods, investors dedicated small portions of their portfolios to art, stamp and coin collecting as a way to preserve value. Alternative investments such as these have always been a key inflation strategy to preserve wealth. That said, they represent high risk and should only contain amounts that investors can afford to lose.

Within this context, there’s sufficient momentum in the emergence of digital currency to justify watching Bitcoin closely as a potential alternative investment and inflation hedge.

Bitcoin has garnered global attention with its highly volatile price gyrations and increased adoption. Supporters claim that digital currency has the potential to be “Gold 2.0,” the world’s next reserve currency or the ultimate payment system, while detractors say it’s a speculative, bubble market with no intrinsic value that’s prone to abuse for illicit activities. Further, detractors say that Bitcoin is a market controlled by speculators and could collapse at any moment.

The reason cryptocurrencies are gaining attention today, particularly Bitcoin, is the fact that they represent a massive technological breakthrough in digital money. Bitcoin did away with the third party by publicly distributing the ledger, what Satoshi Nakamoto, Bitcoin’s designer, or some believe a pseudonym for the design team, called the “blockchain.”

Unless you live in a cave, you know that cryptocurrencies are a digital means of monetary exchange that are secured by encryption, with no physical representation of the “money.” The exchanges are recorded in what are known as blockchains, which make up the underlying infrastructure supporting the currencies.

The point is that blockchains have a multitude of uses and represent a dynamic growth area within tech. Blockchains have the potential to add to the growth of many established and inherently strong companies.

For many in the Bitcoin world, the core issue is ease of adoption and not security. Bitcoin proponents argue that while Bitcoins in digital wallets can be stolen if they are entrusted to a shady third party or not properly secured, the system itself is extremely secure.

To trick the Bitcoin network (for 10 minutes) you need the computing power of the top 500 supercomputers times 256, according to experts. With respect to illicit activities, Bitcoin proponents argue that there’s nothing special here. Just as with cold hard cash, the money can be traced when directed through bank accounts and can even be confiscated like cash by authorities, simply by hauling away the hard drives.

From my standpoint, the best cryptocurrency play isn’t Bitcoin itself. It’s simply too risky and volatile. I prefer a pick-and-shovel route, i.e. blockchain technology. The soaring NASDAQ composite is an appropriate backdrop to my argument.

Since the stock market’s coronavirus-induced lows of late March, the tech-heavy NASDAQ composite has been on a tear and hitting new records.

Read This Story: The Biden Bull Market: Alive and Kicking

In the vanguard of the NASDAQ’s rise are mega-cap technology companies that are benefiting from greater demand generated by the coronavirus pandemic. Quarantined consumers are relying on Big Tech more than ever, for teleconferencing, mobile apps, cloud-based data storage and retrieval, cashless payment systems, virtual reality, streaming entertainment and news, and online shopping.

Major corporations are discovering genuine utility with blockchain technology and its development remains a key strategic direction for the developers of the technology as well as the end users. The following chart tells the story of the blockchain’s rapid rise: 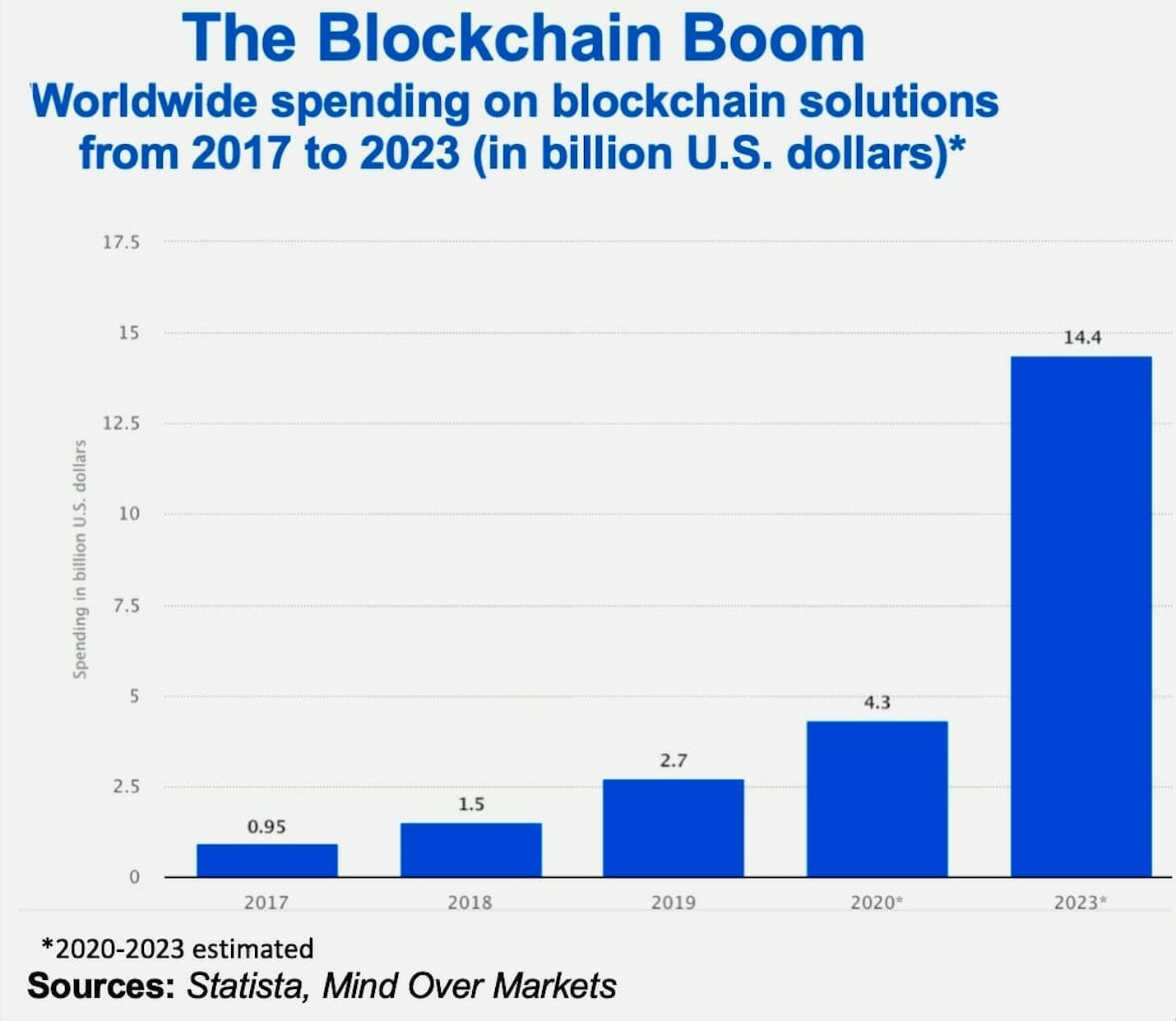 Large software, hardware and chipmaking companies are banding together to form consortiums that create lightning quick private blockchains for individual firms. Warehouse inventory, HR files, supply chains, and many other tasks are well-handled by the blockchain.

These networks provide the capability whereby users can integrate blockchain applications with the cloud services and tools of their respective organizations, to manage shared business processes. Increasing numbers of enterprises are using blockchain technology for their social media sites, turning them into e-commerce platforms as well.

All of which brings me to a related tech trend that’s revolutionizing our lives: the global roll-out of 5G (“fifth generation”) wireless technology.

With its massive bandwidth capabilities, 5G is expediting the development of blockchain technology, as well as the seamless web of interconnectivity known as the Internet of Things.

Our investment team has pinpointed an innovative tech company that’s crucial to the proper operation of 5G networks. The company also is poised to play a major role in blockchain development. Click here to learn more.