What The “Buffett Indicator” Tells Us Now

Are stocks currently overvalued and on the verge of a correction? To shed light on that quandary, let’s consult a time-proven tool favored by the Oracle of Omaha himself, Warren Buffett.

Buffett by latest estimate is worth $84.6 billion, so he must know a thing or two. The tool is called the “Buffett Indicator,” which I’ll get to in a minute.

We’re living through a dramatic and historically significant episode in American politics. The second impeachment trial this week of Donald Trump makes for emotionally disturbing television. And yet, the financial markets are responding to Trump’s impeachment with a yawn.

In Washington, what matters is power. On Wall Street, what matters are outcomes. The Democrats control the White House and both chambers of Congress, which means the outcome (i.e., fiscal stimulus) that the financial community wants is assured. The markets are uninterested in the lawyerly arguments of Trump’s Senate trial. Gordon Gekko, in the 1987 movie Wall Street, summed it up: “It’s all about bucks, kid. The rest is conversation.”

Accordingly, the U.S. stock market rally has shown remarkable momentum, with the S&P 500 gaining more than 18% since the November 3 election. All three major indices are hovering at all-time highs, on expectations that massive new federal spending will add impetus to the economic recovery.

Many market observers are starting to get skittish about valuations. As of this writing on Thursday, the forward price-to-earnings (P/E) ratio of the S&P 500 sits at 25.3. This P/E ratio is above the five-year average (16.8) and above the 10-year average (15.1). There appears to be a disconnect between the stock market and the economy.

Read This Story: The K-Shaped Recovery: How to Invest

Even though the economy is improving, the coronavirus pandemic is still with us and unemployment is elevated. More than 10 million Americans are out of work and scores of small businesses teeter on the brink of bankruptcy.

A bubble in search of a pin?

Are we in the midst of an asset bubble that’s about to pop? Let’s turn to the so-called Buffett Indicator for clues.

This indicator, devised by Warren Buffett, is the market cap to gross domestic product (GDP) ratio. It’s a measure of the total value of all publicly traded stock in a country, divided by that country’s GDP.

In a Fortune magazine interview in 2001, Buffett described his indicator as “the best single measure of where valuations stand at any given moment.”

Think of the Buffett Indicator as a broad way to assess whether a country’s stock market is overvalued or undervalued. Brace yourself for a possible wave of selling, because the indicator for the U.S. currently hovers at a record high.

The ratio of market capitalizations, as measured here by the broad Wilshire 5000 index to U.S. GDP, is substantially higher now than it was shortly before the dot-com bubble burst in 2000 (see the following chart). 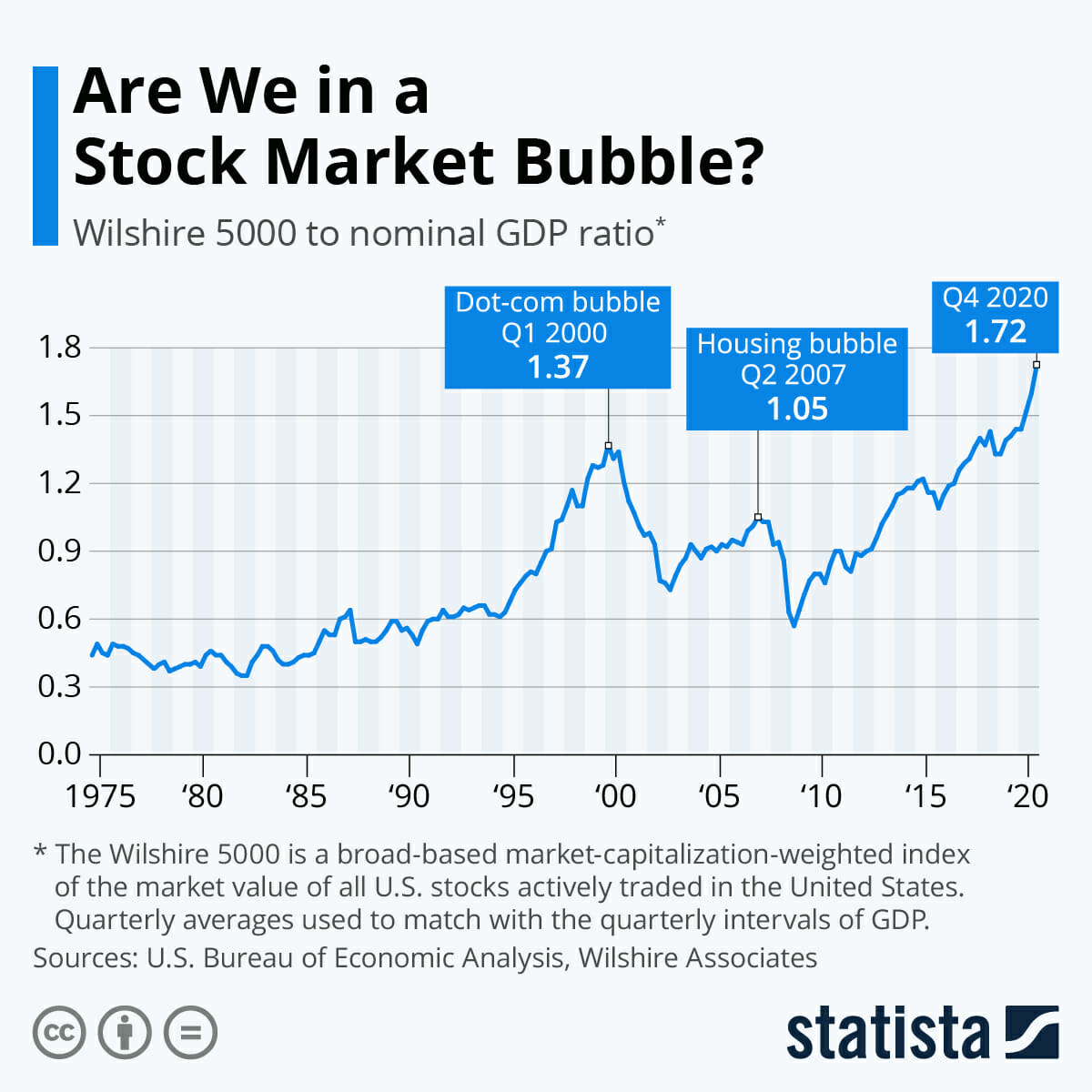 So how should you invest now? Let’s turn again to Warren Buffett. I generally follow the value investing school of thought and Buffett takes value investing to a deep level. As he puts it: “In the short term the market is a popularity contest; in the long term it is a weighing machine.”

The market appears to be frothy right now, but you should welcome a temporary pullback. Buffett also said: “Widespread fear is your friend as an investor because it serves up bargain purchases.” Never panic during a sell-off. Not only will the market eventually bounce back, but it will do so a lot sooner than you might think.

Buffett doesn’t necessarily wait for the market to eventually reward the merits of underappreciated stocks; he chooses stocks according to their potential as companies. He looks for strong balance sheets, good products that people need, market domination, and high-quality management. He emphasizes long-term ownership of a company, not just the chance for capital appreciation based on temporary market dynamics.

The upshot: Stick to your long-term goals. Pursue wealth-building with mental discipline, one step at a time.

Warren Buffett’s timeless investment principles guided our investment team, when we put together a new special report: “5 Red Hot Stocks to Own in 2021.”

In this report, we provide the names and ticker symbols of reasonably valued growth stocks. These picks are strong enough to weather temporary downturns and they’re poised to soar as economic growth accelerates later this year. Click here for your copy.