The Best Stock to Own for the Roaring Twenties

Last April, I identified three companies as economic bellwethers for the Chinese economy (“An Early Warning Signal for the Stock Market”). I theorized that the performance of those three stocks would be indicative of the health of the overall global economy.

I dubbed this trio of companies the “China Three Stock Economic Activity Index.” What I wanted was a very simple way of tracking the direction of China’s economy throughout the coronavirus pandemic.

For that purpose, I chose Australian oil and mining producer BHP Group (NYSE: BHP). BHP provides China with much of the iron ore used in its steel production. If China buys less iron ore from BHP, that probably means that demand for steel production is declining.

I included fast-food giant Yum China Holdings (NYSE: YUMC) since it operates more than 9,000 restaurants in China. If China suffered a second wave of COVID-19, that would show up quickly in reduced revenues in those locations.

I added one of China’s largest regional airlines, China Southern Airlines (NYSE: ZNH), to the portfolio. The company derives a lot of its revenue from commercial travel, so a drop in its revenue would suggest less business activity in China. 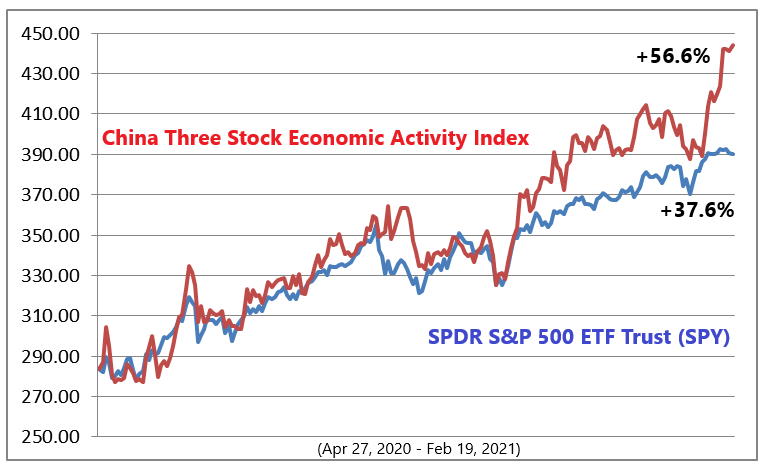 Picking Up the Slack

At first glance, it may seem that either China’s economy is overheating or U.S. stocks are underperforming. However, when we dig a little deeper we can see that the entire explanation for the huge difference in performance can be attributed to a single factor.

Two of the holdings in my “China Three Stock Economic Activity Index” have performed virtually identical to the SPY since last April. YUMC has gained 36.5% while ZNH is up 36.9%. However, BHP has nearly doubled in value (+96.5%), accounting for the entire differential in performance.

I have followed BHP closely since I added it to the Personal Finance Growth Portfolio four years ago. At the time, I reasoned that BHP was the closest thing to a pure-play on the growth of China’s economy.

That’s because BHP was in the process of restructuring its operations to focus almost solely on China. After a couple of years of erratic financial performance, that bet is beginning to pay off in a big way.

Now, BHP’s recent share price surge begs this question: Is BHP still only a pure-play on China, or is it also trading as a hedge against the threat of future inflation?

As I have stated previously, I do not view inflation as a threat to the global economy this year or next. There is too much slack in the system in the form of high unemployment and underutilized factory capacity.

In January, U.S. industrial capacity utilization was 4% below its average level since 1972. At its recent monthly growth rate of 0.7%, that gap would be closed before the end of this year.

I am beginning to think that BHP may be the single best bellwether stock for the entire global economy. Not only is it a direct play on the health of China’s economy, but it produces three of the commodities most highly correlated to future inflation (iron ore, copper, and oil).

For the past few years, mega-cap tech stocks have been viewed as the best way to participate in the growth of the global economy. That may be true, but most of them do not provide much protection from inflation.

While BHP has been soaring during the past month, Apple (NSDQ: AAPL) has fallen more than 10% as has Tesla (NSDQ: TSLA). Both companies make wonderful products but they are consumers of raw materials, not producers.

Higher inflation may still be a few years away. But what we may be seeing in the stock market is a pivot towards businesses that would benefit from higher commodity prices.

If that is the case, an entirely new set of stocks could lead the market higher in the years to come. Already, BHP is leading the charge but there are many others that may soon follow suit.

Editor’s Note: Our colleague Jim Pearce just pinpointed a global mining giant that’s a well-positioned play on the robust economic growth that lays ahead in 2021. Every portfolio should have exposure to commodities, which thrive during expansions and provide a hedge against inflation.

Faster economic growth should also be a boon for small-capitalization stocks. If you’re looking for a small-cap miner that’s a more aggressive bet on the underlying conditions described in the above article, click here.