Asian economic growth is outpacing the rest of the globe, but many equities and funds tied to the region are attractive bargains because they’ve been battered by the coronavirus pandemic. Looking for outsized growth this year? Forget Horace Greeley! Go East, young investor.

Emerging market stocks have passed in and out of vogue over the past two decades. Investors have fluctuated from unbridled enthusiasm about their growth prospects to intense hand-wringing about their riskiness. Now, emerging markets are back, for real. And yet, they’re relatively cheap.

As the global economy picks up steam, the East is home to inherently strong growth stocks that are value plays. Positive factors for the region include population growth, higher education levels, greater technological savvy, and the expansion of a free-spending consumer class that skews toward a younger demographic.

China has resumed its role as global growth engine, assuaging anxieties that it would sputter. The world’s second largest economy showed surprisingly strong gross domestic product growth (GDP) in the fourth quarter of 2020, expanding at a year-over-year rate of 6.5%.

China’s Q4 2020 growth rate exceeded consensus expectations, pushing growth to 2.3% for the full year. This comeback made China one of the few major economies in the world to record positive growth during a year clobbered by the pandemic. Economists expect China’s GDP to expand at the blistering pace of 8.2% in 2021. A tailwind for China and indeed the rest of the global economy is the expected easing of trade tensions under the Biden administration.

In tandem with global growth has been the rise in commodities prices. The value of raw materials should continue an upward trajectory, as producers show a ravenous appetite for raw materials to meet consumer demand.

Read This Story: The Rise of The Commodities “Super-Cycle”

The middle class in the United States and other developed countries is under pressure, but the opposite is occurring in Asia.

According to recent data from Euromonitor International, the middle class in Asia is not only expanding, but also enjoying robust gains in personal income. That’s particularly good news for global giants that make tech gadgets and branded consumer goods.

What does “middle class” mean, anyway? There’s no universal definition, because living conditions and costs vary from country to country. The core of the definition is the financial wherewithal to spend on discretionary items such as household durables, leisure, tourism, and recreation. In addition, middle class members are confident that they can survive an unexpected economic shock (e.g., a temporary layoff) without slipping into poverty.

The ranks of the middle class in Europe and the Americas are growing at a tepid pace, as globalization and automation replaces traditional manufacturing jobs. Membership is rising a bit faster in Africa and the Middle East, but middle classes remain smaller in those regions.

However, according to recent research by the Brookings Institution, the situation is brighter in Asia. Only in this region are there middle classes of substantial size which are also strongly expanding. Take a look at the following chart. 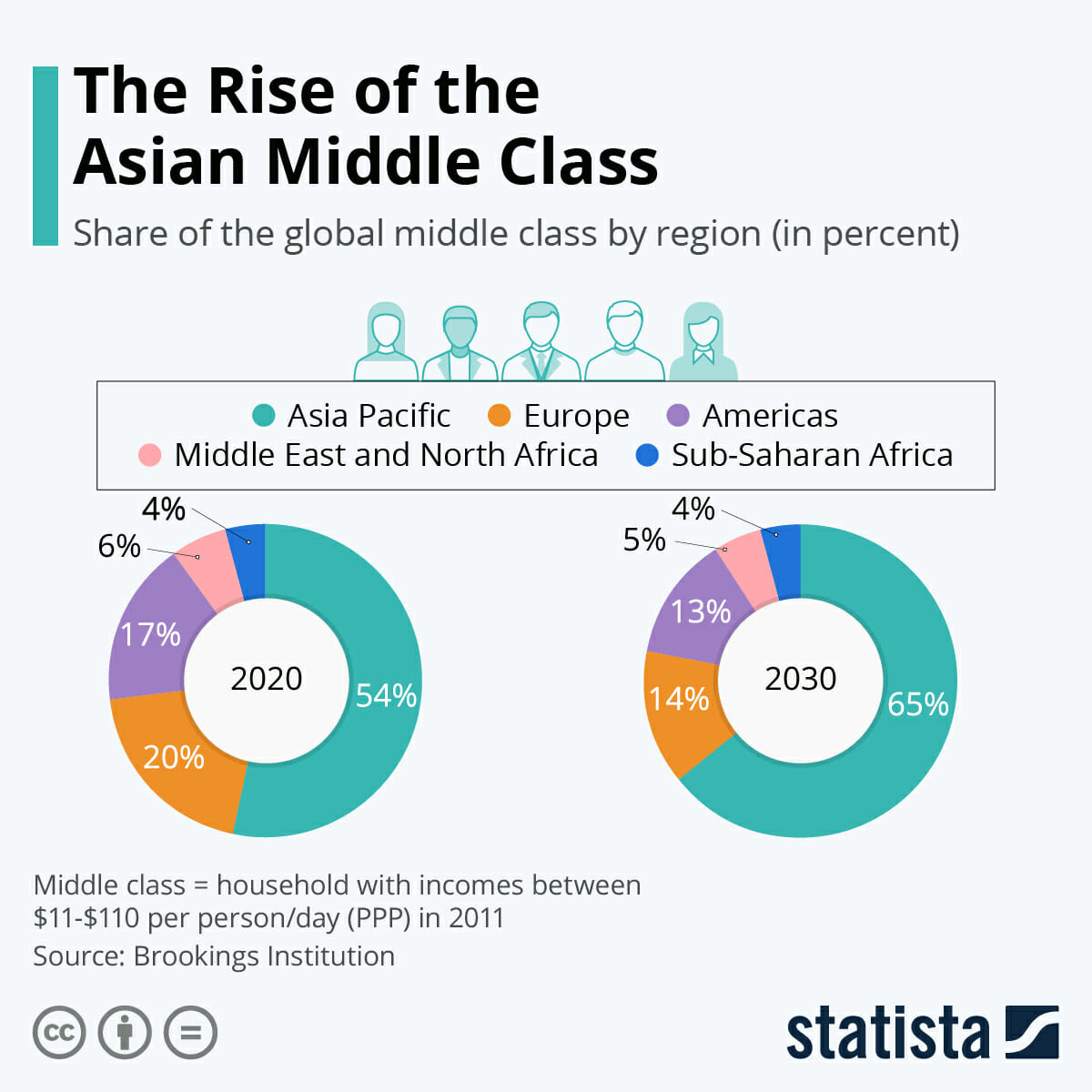 In 2020, an estimated 2 billion Asians were members of the middle class and that number is set to increase to 3.5 billion by 2030. By comparison, middle class membership in the Americas is estimated to have reached 647 million in 2020 and is on track to hit 689 million by 2030.

Middle class citizens in the Americas accounted for 17% of global middle class size in 2020, a percentage that’s set to decrease to 13% in 2030 due to the fast growth of the Asian middle class. In 2030, two in three members of the middle class will be Asian.

According to estimates from the World Economic Forum, Asia’s GDP in 2020 overtook the GDP of the rest of the world combined. By 2030, the region is expected to contribute roughly 60% of global growth. Don’t be a parochial investor. If you don’t look overseas for opportunities, you’re leaving money on the table.

Which brings me to our special report. In the context of the macroeconomic trends described above, the analysts at Investing Daily have pinpointed the best momentum stocks to buy now. They reveal the names and ticker symbols of these investments in a new report: “5 Red Hot Stocks to Own in 2021.” By leveraging structural changes in the global economy, these equities should outpace the broader market this year and beyond. For your copy, click here.