The financial markets lately have been reminding me of a movie genre I’ve always enjoyed: the spaghetti western. Like the menacing hombres in a Sergio Leone epic, the “bond vigilantes” are back in the saddle to cause fear and mayhem.

Bond vigilante is Wall Street slang for a bond market investor who “protests” (so to speak) monetary or fiscal policies he considers inflationary by selling bonds, which in turn boosts yields. In the bond market, prices move inversely to yields.

In recent days, signs of stronger economic growth have been stoking inflation fears, causing a sell-off in bonds and boosting yields. Investors are rattled, as reflected by Thursday’s swoon in global stock markets.

U.S. Treasury bond yields jumped past the dividend yield for the S&P 500 on Thursday as bond markets continued to sell off. Benchmark 10-year Treasury notes at the closing bell had reached 1.52%, an increase of 0.13%, surpassing the estimated S&P 500 dividend yield of 1.48%.

On Thursday, the Dow Jones Industrial Average plummeted 559.85 points (-1.75%), the S&P 500 shed 96.09 points (-2.45%), and the tech-heavy NASDAQ plunged 478.54 points (-3.52%). Tech shares, which have enjoyed a run-up in prices since the November election, led the sell-off. The CBOE Volatility Index (VIX), aka “fear gauge,” spiked more than 38%. In pre-market futures contracts Friday, stocks were trading higher as bond yields reversed direction.

Federal Reserve Chair Jerome Powell this week has tried to reassure investors that the Fed will stick to its policy of ultra-low interest rates, even if inflation flared up. But his reassurances have done little to calm Wall Street, as the job market improves and key economic indicators (e.g., retail sales and home prices) point to a robust economic recovery in 2021.

The U.S. Labor Department reported Thursday that first-time jobless claims fell to 730,000 for the week ended February 20, well below the 845,000 consensus estimate and a steep drop from the 841,000 the previous week. The numbers marked the first decline in five weeks. Continuing claims also fell, decreasing 101,000 to 4.42 million, the lowest since the trough of the pandemic-induced economic contraction in late March 2020.

A healthier job market, fiscal and monetary stimulus, and a rapidly rebounding China are setting the table for at least a moderate rise in inflation, which in turn is bad news for bonds because inflation erodes the value of future payments.

However, in my view, there’s still sufficient slack in the COVID-battered economy to preclude a worrisome level of inflation. Let’s not forget, 10 million Americans remain out of work (and many of those jobs are never coming back). If inflation does spike this year, it’s likely to be a temporary phenomenon and not the start of a long-term trend. Regardless, the Fed has vowed to remain patient and not tighten the monetary spigot anytime soon.

Inflation remains largely under control, with the “core” rate for the consumer price index (excluding volatile food and energy costs) hovering at 1.4% in January. The following chart shows the U.S. inflation rate, over the past 10 years: 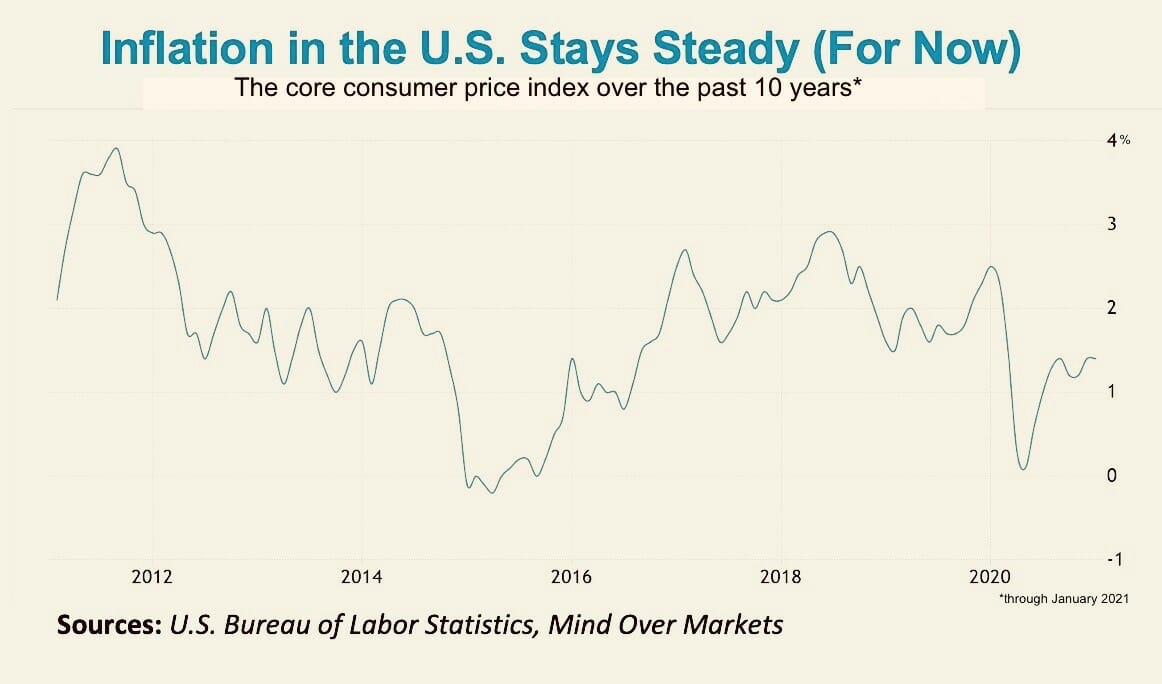 For a few dollars more…

You need to buy inflation hedges now, before the rest of the crowd gets further spooked by inflation and bids up the prices of these assets. Broadly speaking, inflation hedges worth considering include precious metals, inflation-indexed bonds, and commodities.

Portfolio allocations that make sense now, as a general rule of thumb: 45% cash; 30% stocks; 15% hedges (such as gold and other commodities); and 10% bonds.

We’ve unearthed a raw materials mining company that belongs in your portfolio’s hedges sleeve. Amid the conditions that I’ve just described, this company is uniquely positioned to prosper. Even if inflation only rises by a modest amount, this miner will reap a windfall and enrich investors.

This small-cap mining stock plays a dual role: it’s a hedge that also offers the potential for market-beating profits. To learn the details about our commodities play, click here now.