The Remote Economy Slows Down

One year ago, I wrote my first article about the coronavirus pandemic (“The Remote Economy Takes Off”). At that time, none of us knew how it would turn out. Despite the stock market’s extreme volatility in the weeks following the outbreak, I realized then that “not all companies have been adversely impacted by the threat posed by the coronavirus pandemic.”

I identified three businesses that I believed would thrive during the pandemic: Grubhub (NYSE: GRUB), Netflix (NSDQ: NFLX), and Zoom Communications (NSDQ: ZM). I only wish I had invested my life savings accordingly. Over the next 12 months, those three stocks delivered an average return of 113% compared to a 28% gain for the SPDR S&P 500 ETF Trust (SPY). 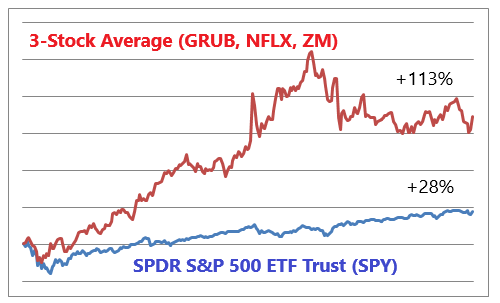 Of course, it might have turned out much differently. The virus could have fizzled out after a few weeks or months. In that case, it is unlikely that those three stocks would have performed as well as they have. Regardless, that is now water under the bridge.

The question today (and every day) is, how will they perform going forward? To some degree, the companies that benefited from the virus should continue to thrive even after it is gone. As I said about these businesses a year ago, the outbreak “represents an opportunity to gain new customers that may stay with them long after the outbreak is over. The longer it takes to contain the virus, the stickier those relationships will become.”

To be sure, those three companies have gained new customers that will stay with them long after COVID-19 is a distant memory. However, Wall Street tends to overreact to current trends by extrapolating them too far into the future. That sets the stage for some reversion to the mean.

As you can see in the chart above, the widest spread between these three stocks and the index was several months ago. In mid-October, these stocks were worth nearly two-and-a-half times the index. Over the past five months, the spread has narrowed considerably.

The turnaround began on October 19. That was just before several successful COVID-19 vaccine trial candidates were announced. Since then, these three stocks have fallen by an average of 26% compared to a 14% gain in SPY.

The problem is not that these companies have underperformed. They have each taken advantage of a unique set of circumstances to vastly improve their respective financial positions:

The problem is the multiples assigned to those metrics during the peak of the pandemic. We all knew that the virus would not go on forever. We also knew that several drug companies were working on vaccines for the virus. The only thing we didn’t know is exactly when the pandemic would be brought to an end.

We still don’t know the answer to that question, but we have a pretty good idea. Probably the second half of this year or the first half of next year, depending on how quickly those vaccines can be distributed and administered.

By then, a new set of stocks will be leading the market higher. In fact, it may already be happening. According to Yardeni Research, the top-performing global industry classification standard (GICS) sector over the first two months of 2021 has been energy stocks, jumping 28.4%. Of course, much of that gain is a rebound from last year’s dreadful performance.

The next best sector is financials, up 12.3% followed by a 6.3% rise in telecom stocks. One element that all three of those sectors have in common is they pay high dividends. That may not be the primary reason for their newfound popularity, but clearly investors are no longer punishing companies for paying dividends.

Not long ago, growth stocks such as Amazon.com (NSDQ: AMZN) and Tesla (NSDQ: TSLA) were lauded for not “wasting” cash on dividends. Instead, excess cash flow was retained until it could be invested in the growth of the business. But with so many companies sitting on more cash than they know what to do with, perhaps the stock market is sending them a message.

If so, then some companies may feel compelled to raise their dividend payments this year instead of using that money to speculate on Bitcoin (BTC) or repurchase shares. The remote economy is slowing down. As people head back outdoors, it appears they want more of that money in their pockets than in a company’s bank account.

Amber isn’t just a veteran of Wall Street. She’s also the veteran of a shooting war in the Middle East. She served in Operation Iraqi Freedom. While deployed overseas with military intelligence, she learned the importance of interpreting data to forecast what is likely to happen in the future.

Right now, as an investment analyst in the civilian world, Amber wants to send you a brand new P.I.N. that gives you a shot at instant cash. This number will work so steadily every week, you’ll begin to think of it as an extra paycheck.

This number isn’t a weird ticker symbol for a dividend stock, nor an international phone number for how to buy gold bars. To learn the specifics on how Amber’s P.I.N. works, click here now.