Red Dragon Rising: The Profits and Perils of China

Chinese leader Xi Jingping is expected to unveil an aggressive multiyear strategy for guiding China, when the Communist Party-controlled legislature, the National People’s Congress, gathers on March 5 in Beijing for about a week. At the top of China’s agenda: continued emphasis on sophisticated military technology.

As a long-time specialist in aerospace/defense, I’ve watched China pour vast resources into its military sector. In past years while attending international air shows, I’ve observed first-hand the ascendancy of China’s technological know-how. Once derided for producing poor-quality “knock offs” of Western and Soviet aircraft, Chinese original equipment manufacturers (OEMs) have made enormous strides in quality. This innovation has spilled into the civilian sector.

The global trade war may be easing under the new Biden regime, but the Sino-American battle for global hegemony is heating up. Therein lay investment opportunities, as I explain below.

This week, China will point with pride to a robust domestic base for the production of state-of-the-art aerospace manufacturing. This capability is a national triumph for China but it also poses perils for the Western alliance, which has frayed in recent years.

According to the latest statistics from the Stockholm International Peace Research Institute, China accounts for the second largest share of arms sales, following the U.S. Both countries have been boosting defense spending over the past decade, with a wary eye on each other. Among the chief beneficiaries of this rivalry are U.S.-based aerospace/defense giants, which still dominate global military spending.

Xi views the U.S. as an adversary, even with Donald Trump out of the White House, and the hard-line Chinese leader has been challenging U.S. military and commercial influence in regional flash points around the world, including emerging economies in Latin America and Africa. America’s recent abrogation of multilateral trade agreements has left a vacuum in lucrative markets and China has been all too happy to barge in.

Within this geopolitical context, China-based companies in the industrial and technology sectors should prosper in 2021 and beyond. China’s containment of the coronavirus pandemic is a strong factor in favor of its economy.

Also on the agenda in the coming days at the National People’s Congress meeting will be the commitment of China’s leaders to hasten the economy’s transformation to green technologies. Beijing is intent on moving away from fossil fuels to embrace electric cars and renewable energy, such as wind and solar.

China has resumed its role as global growth engine. The world’s second largest economy showed surprisingly strong gross domestic product growth (GDP) in the fourth quarter of 2020, expanding at a year-over-year rate of 6.5%.

China’s Q4 2020 growth rate exceeded consensus expectations, pushing growth to 2.3% for the full year. This comeback made China one of the few major economies in the world to record positive growth during a year bedeviled by the pandemic.

Chinese equities finished 2020 at multi-year highs, a bull run that should continue as 2021 unfolds. Economists expect China’s GDP to expand at the blistering pace of 8.2% in 2021, dwarfing projected growth of the developed world.

The assembled Chinese leaders this week intend to announce an increase in debt financing to spend more on job-creation projects. These infrastructure initiatives are good news for global construction firms and commodities miners. China’s ambitious “Belt and Road Initiative” extends through 60 partner countries, with planned construction that will consume huge amounts of raw materials for several years.

The rapid rise of e-commerce in China is another sign of the country’s momentum. E-commerce in China already comprises more than 50% of global retail sales on the Internet, with Chinese online trade continuing to grow.

The party conference this week also is expected to underscore China’s commitment to developing 5G (“fifth generation”) wireless technology. The following chart depicts the long-term upward trajectory of 5G adoption around the world: 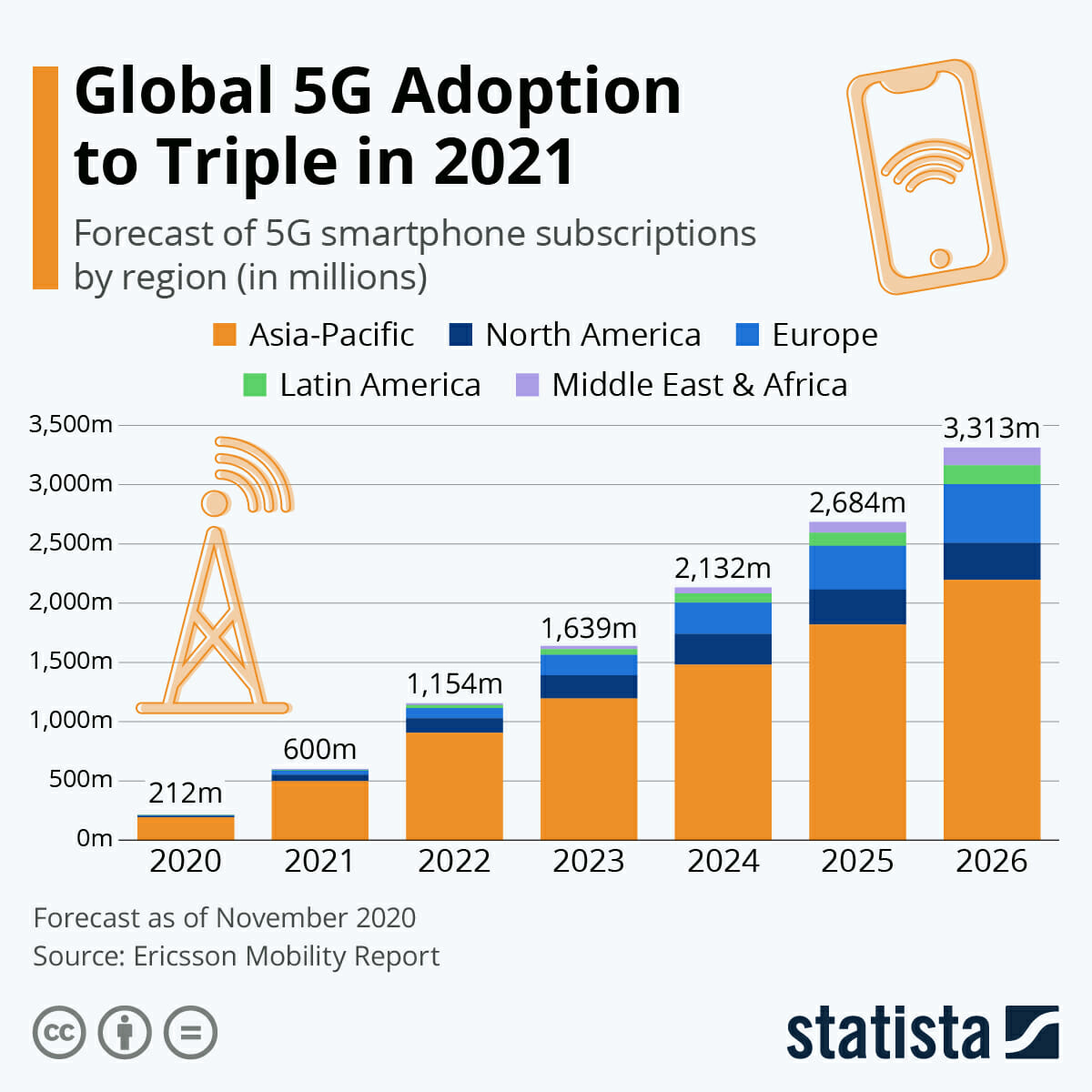 As you can see from the chart, the biggest chunk of 5G expansion is occurring in the Asia-Pacific region. According to research firm Statista, there were approximately 42.3 million 5G users in China in 2020, with a projected 1.39 billion by 2030 (yep, that’s billion with a “b”).

The global implementation of 5G carries national security implications, for both China and the U.S. Military 5G mobile networking capabilities will exert a huge influence on defense communications.

The country that dominates 5G will obtain an edge in military competitiveness. The Chinese government is subsidizing 5G development, whereas the U.S. government has left 5G to the private sector. The U.S.-China arms race has morphed into a “5G race.”

Regardless of the COVID-19 pandemic or economic ups and downs, the momentum of 5G can’t be stopped. That spells opportunity for the shareholders of companies that benefit from lightning quick connectivity.

Looking for ways to profit from the trends that I’ve just described? Our team of strategists recently put together a special report on how to invest in 5G. Click here for our presentation.

John Persinos is the editorial director of Investing Daily. He also serves as an analyst with the aerospace/defense consulting firm The Teal Group. You can reach John at: mailbag@investingdaily.com. To subscribe to his video channel, follow this link.