Our Transocean Trade: Take the Money and Run

A few days ago, a friend thanked me for some advice I gave him last summer. At that time, he had come into a small inheritance that he wanted to invest in something with a lot of upside potential.

As I explained in an article last August, I suggested that he buy a call option on deep sea oil driller Transocean (NYSE: RIG). At that time, RIG was trading for a little over $1 a share after plunging in the wake of the coronavirus pandemic as shown in the chart below. 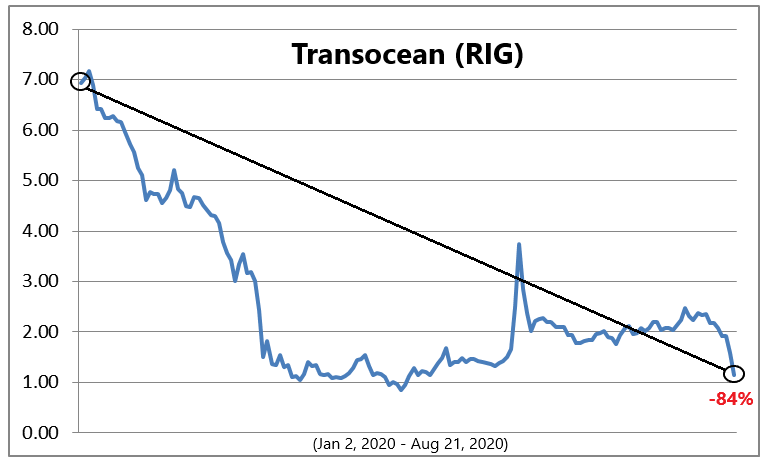 There is no way to put a happy face on a chart like that. For all the world, it looks like a company that is about to go out of business. And had it not been for the COVID-19 vaccines now being administered, that very well may have happened.

Fortunately for Transocean (and its shareholders), oil prices started rising in November and haven’t stopped. This week, the price of oil topped $66 a barrel for the first time in over two years.

At the same time, RIG reversed direction and soared up the charts. Last week, it traded above $4 for a gain of 274% in less than eight months (the chart below starts from where the chart above ends). 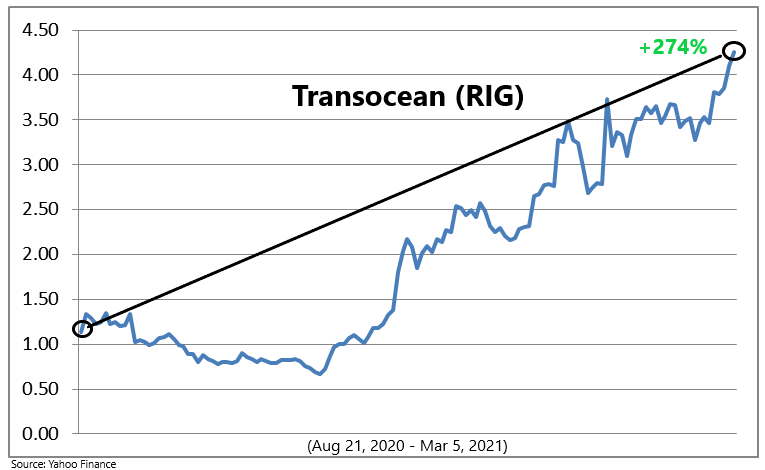 That’s a great trade in anyone’s book. But as I mentioned above, I told my friend to buy a call option on RIG and not the stock. So let’s see how that trade is working out.

The call option I recommended to my friend last August does not expire until next January. That is what is known as a “LEAP”, or long-term equity anticipation security.

That option has a strike price of $1. That means my friend can exercise it at any time and buy RIG for that price regardless of where it is actually trading in the market.

He isn’t going to do that. Instead, he is going to sell the option and take the profit. He paid 80 cents for that option in August. At the start of this week, he could sell that same option for $3.25.

That works out to a gain of a little over 300%. And if RIG continues to gain ground this year, the profit could end up being far greater than that.

Now, my friend wants to know if he should keep the option or sell it. Based on the company’s Q4 results, I suggested that he sell it and book the gain.

During the fourth quarter, Transocean recorded $690 million in total contract drilling revenues. That is $83 million less than in the third quarter, before oil prices took off. As a result, Transocean had an adjusted net loss of $209 million in Q4 compared to a loss of only $69 in Q3.

That’s a big red flag. If an oil driller cannot improve its operating results while the price of oil is going up then something is wrong.

I’m not sticking around to find out what that problem is. By the time I know, the stock may already be well on its way back down towards $1. I learned a long time ago to take the money and run.

There is another reason why I want my friend to close out this trade and take the huge profit. Looking back on it, I realize I made an error in recommending buying the option instead of the equity.

Even though this trade has worked out in my friend’s favor, there isn’t enough upside potential to justify the higher risk of owning the option. It all boils down to simple math.

Let’s say RIG once again reverses direction and falls back to $1 by the end of this year. In that case, the call option would have no value. My friend could lose all his money if he holds onto the option.

In this case, the difference in price between the equity ($1) and the call option ($0.80) provides some leverage but not enough to warrant the extra risk. For an options trade to make sense, there needs to be a lot more leverage than that.

When it comes to knowing how to make winning options trades my colleague, Jim Fink, is one of the best in the business.

Here’s the exciting news for individual investors: Jim has devised a proprietary options trading strategy that racks up profits regardless of the pandemic, stock market gyrations, or political turmoil.